Today’s Card of the Day is related to a trade that the Pittsburgh Pirates made with the Atlanta Braves 34 years ago today. The Pirates acquired veteran infielder Ken Oberkfell, while giving up young outfielder Tommy Gregg. Before that trade was made, Gregg had three cards produced that showed him with the Pirates. However, one of those cards had some false advertising.

The 1988 Fleer Update set consisted of guys who made their big league debuts earlier in the 1988 season, as well as players who changed teams during the season. The choices for the set were made after Gregg debuted (he actually played briefly in late 1987), but before his trade to the Braves. There was just one major problem with the Gregg card in the set. Instead of describing it, let’s get right into the card. Here’s a look at card #113 in the 1988 Fleer Update set, labeled as Pirates outfielder Tommy Gregg. 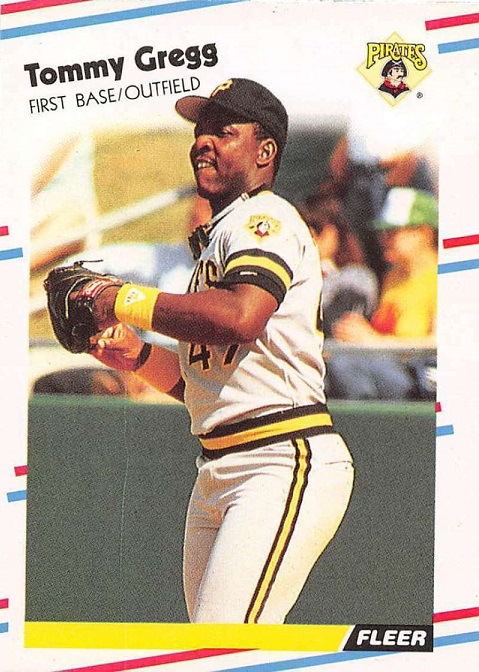 Yup, this card says Tommy Gregg in the top left corner. However, that is not Mr Gregg. That is Randy Milligan, who spent one partial season with the Pirates, but it wasn’t even a full calendar year. He was acquired at the end of March in 1988 and traded in the beginning of November in 1988. Just the perfect amount of time for Fleer to get his photo in a Pirates uniform and put it in their set, trying to pass it off as Tommy Gregg.

Fleer could have avoided all of this confusion if they did just the tiniest bit of research. There’s a big difference between Milligan and Gregg that should have tipped them off. Gregg never played first base for the Pirates. Milligan only played two innings of outfield during his first four seasons in the majors. Clearly that is a first baseman’s glove, so clearly that isn’t Tommy Gregg.

I call the 1988 Fleer set the Wonder Bread set. Go look at the packaging of Wonder Bread if that doesn’t make sense to you. It’s especially true with Pirates cards, which had the yellow stripe at the bottom. Fleer included that great Pirates logo in the top right, but you can also see it clearly on the jersey, so you get a nice double shot. 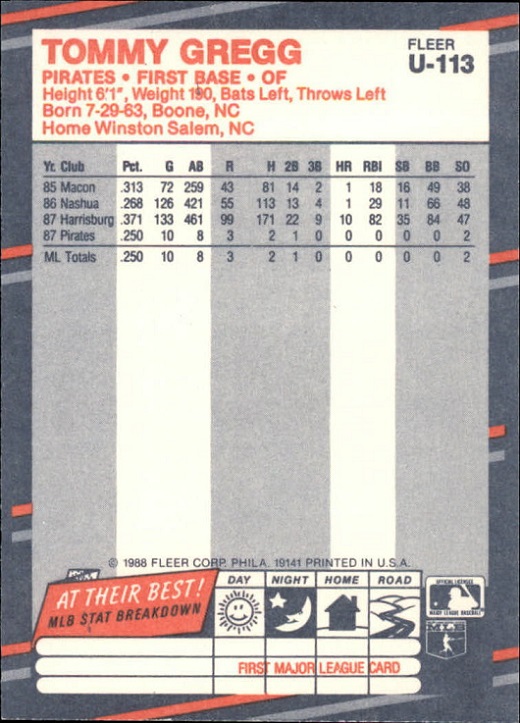 Fleer didn’t mix up the stats on the back. Those before to Gregg, and you can see that he didn’t have a long pro career before his big league debut. Fleer had a breakdown of three stats on the back, which were broken up into four categories. Instead of doing that breakdown for his ten games in 1987, they just told you that this was his first Major League card. I’m guessing it’s worded that way because he had minor league cards already, though Gregg was in the 1988 Donruss set, so that would be his first MLB card because it was released long before the Fleer Update set. For the record, the missing stats they would have included were batting average, slugging percentage and on base percentage.

This is a really interesting card. Unfortunately, Fleer didn’t correct the error, and without a correction, then the value doesn’t go up on the card. There are 16 auctions for this card on Ebay and three sellers have it for under $2 delivered, which includes me factoring in the tax. There are no special auctions (graded, autographs, multiple cards), so basically just watch the shipping charges if you decide to purchase this card.