Today’s Card of the Day comes from the Topps Living Set, which has been printing new cards weekly since 2018. One of those early cards that they printed was Jordy Mercer, who is card #36 in the set. He is the first of 15 Pittsburgh Pirates cards (so far) in the set. The latest came out about a month ago when they printed an Oneil Cruz card.

The Living Set cards are listed online for sale for one week. However many cards are ordered during that week is the amount that they print. This set was a lot more popular in the beginning than it is now. After a few weeks, the set really caught on, and then it has slowly died off unless a popular player gets printed. Mercer had 5,731 copies ordered. Compared to a regular Topps card issued in packs, that is a very small number. However, common players in the Living Set now get about 1,500 copies ordered on average, with a low of 1,197 for Shane McClanahan. One of the ironic things about that order/print number is that McClanahan was their least popular player to order, yet once his low print run was announced, the price of his cards then took off. Being unpopular led directly to popularity overnight.

The Living Set is based off of the 1953 Topps set, using the same exact look and the front and back for both sets. The 1953 set used artwork instead of real photos, and Topps hired artists to do the Living Set as well. Most of the photos are close-up shots of the player, showing them from the shoulders up. I personally prefer action shots on cards, but I’ve been collecting all of the Pirates cards in this set since this Mercer card came out. My favorites have been the cards of Honus Wagner, Roberto Clemente, Willie Stargell and Ralph Kiner. No coincidence that I prefer the retired players (you are reading a Pirates history site that has more team history than you can find anywhere else, so that should be obvious). The one problem with the Pirates is that seven of the 11 other players from the team set are no longer with the club, so I’m going to prefer the cards of players who made their marks with the team. 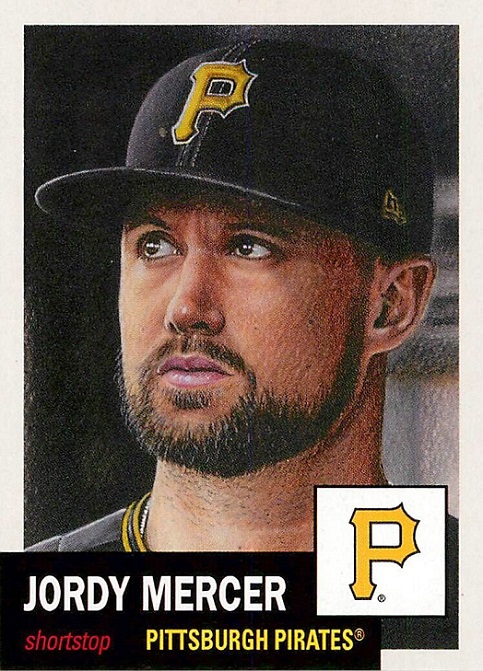 The front is no doubt 1953 style, and I like that Topps decided to not add some company or set logo on the front. The colors for everything are the same as 1953 in the box for the name/position/team. The only real difference is a major one, but it’s something that they changed on the retired players. The 1953 Pirates logo is so much better than the current team logo, which makes the original cards look better. Here’s an example. The four retired players got different logos more in line with the years that they played. As you can see here with Mercer, the artwork is very detailed, which wasn’t the case with many of the original cards. That same link for the logo works for the comparison in artwork as well. 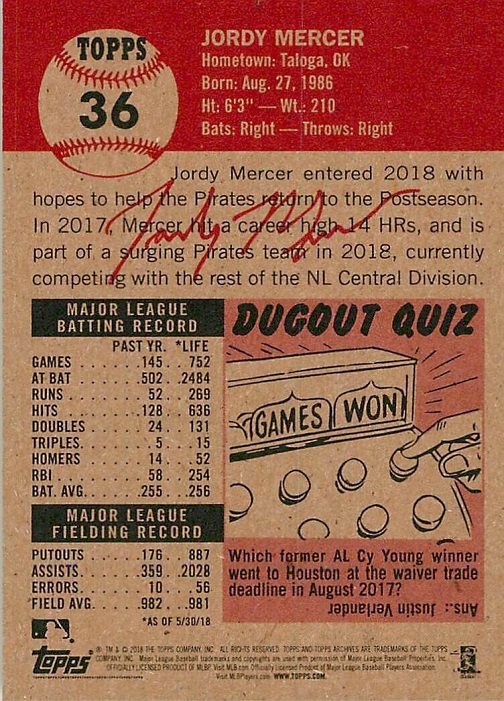 The back is set up exactly like the 1953 set, with the color choices, stats the chose to include (both year/career and categories), the Dugout Quiz and the small section for player facts, with a facsimile autograph making that section harder to read. Really the only difference is all of the legal mumbo jumbo at the bottom. The stats on the backs of these cards were all up to date at printing time. As you can barely see here, Mercer’s stats run through May 30, 2018.

If you’re interested in this card, you’ll be happy to know that it is cheap because they printed so many. His cards have actually decreased in value since being printed, which isn’t true for most cards in the set. No one is giving them away, but if they put them in a regular auction setting, they do poorly. You can either buy one now for around $5 delivered, or wait and possibly save $1-$2. People got these cards graded and that turned out to be a bad investment in most cases. A few PSA 9’s saw no extra value added, even though they had to pay a grading fee for the card. Even if you luck out and get a PSA 10, the payoff for one of those was a $30 sale, which included shipping. Between purchasing the card, shipping/grading it and shipping to sell it, plus Ebay listing fees, the payoff was definitely under $10 profit, and that’s the best case scenario. If you get a PSA 9 instead for the grade, you’re losing $10 if you sell it.