Today’s Card of the Day article is just the second appearance for All-Star outfielder Jason Bay. The last one was one year ago today, marking the anniversary of the date that the Pittsburgh Pirates acquired Bay and Oliver Perez for Brian Giles in 2003. Hard to believe it has been 19 years since that trade.

Since Bay has only been here once before and he played during an era of many new cards for star players each year, I had plenty of options for today’s card. I used the usual method of scrolling Ebay until something caught my eye. That led to a brief search before I landed on the 2005 Upper Deck Sweet Spot Signatures Autographed Bat card. Unlike 98.3% of current players, Bay had a nice signature, though this might not be the best spot for signatures as you will see below. Let’s get right into the card. 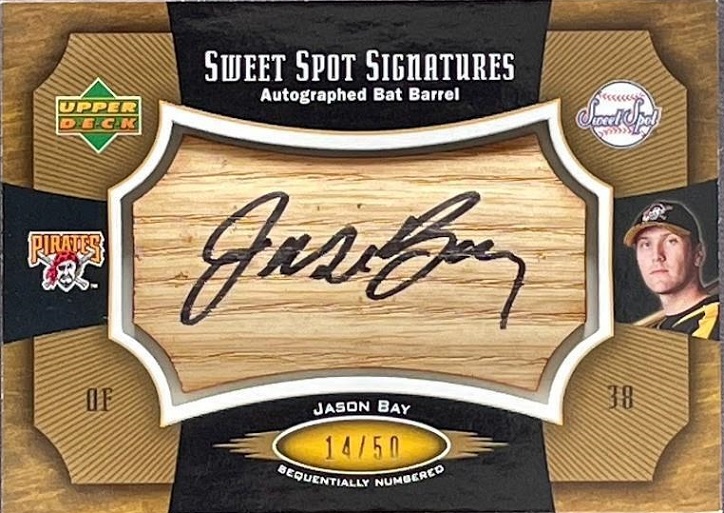 As you can see by the signature, it looks like it was a rough cut of wood and there are some spots where the ink didn’t fully get on the bat piece. You would know without help that this signature says “Jason Bay”. Try figuring out most of the current Pirates. I don’t know what league-wide thing happened recently, but it became acceptable to scribble a few letters or shapes and pass it off as an autograph. They should really do a better job of it.

Upper Deck produced 50 of these cards, all signed by Bay and numbered from 01-50. For certain players, some numbers are worth a little more. Some people collect cards with the “01” and will pay extra, others might want the final one, while still others will want card #38, because that was Bay’s uniform number with the Pirates. I think that latter works better with bigger name players, so card #38 would have been more popular when he was a perennial All-Star type player. If they put out some numbered card for Willie Stargell now, #8 would be more sought after by collectors.

I like the design of these cards, with the wood-grain border for the entire card, and the section around the bat. I also like the use of Pirates colors in the bottom part for the card number. For a Jason Bay card, that’s an awfully small photo of Bay. The inclusion of a Pirates logo on the front always earns bonus points. 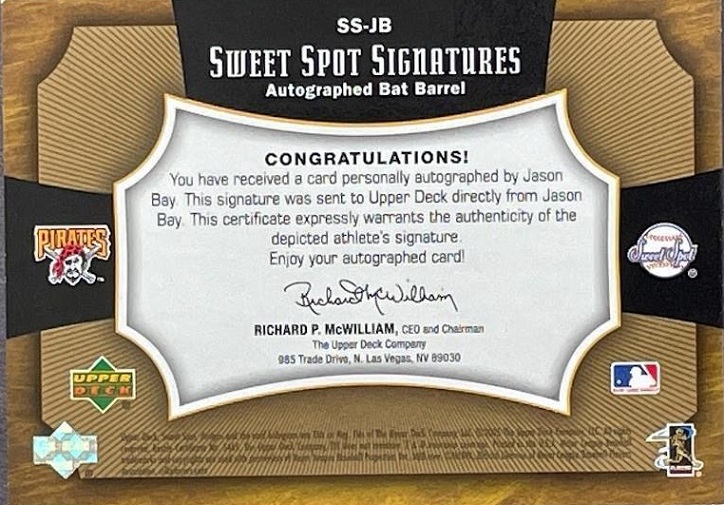 The back is just to congratulate you on card, which only worked when you were pulling them out of a pack. No need for it when I’m purchasing it off Ebay 17 years later. It lets you know that they vouch for the autograph’s authenticity and it came directly from Jason Bay. One thing I didn’t notice when I picked this card is that this isn’t a game used bat. Apparently they just sent players pieces on bats to sign, which makes me wonder if they were really bat barrels at all. Why not just cut up wood? A second Pirates logo on the back is always appreciated.

As for the pricing of this card, this is the only one of the 50 examples that is on Ebay right now and none of the others were on the site in the last three months. This one is going for $19.50 delivered, so if you want it, that’s your card. Not many of these bat cards have ended recently, but most commons go for less than that price, including a Troy Hafner that ended under $7, so that Bay price might be a little high. However, if you want one, your options are the one on Ebay now, or wait and hope something cheaper comes along.