Today’s Pittsburgh Pirates Card of the Day comes from the 1919 W514 set. We have featured this set here twice before, and both times it was for a Hall of Fame manager who was a player at the time with the Pirates. Here are those articles for Casey Stengel and Billy Southworth. Today’s subject is Wilbur Cooper, who was acquired by the Pirates 110 years ago today. He got a little bit of attention recently when the Pirates announced their Hall of Fame class because he wasn’t in the inaugural class of 19 members. Cooper is the franchise’s all-time leader in wins, and it’s safe to say that he will be the only 200-game winner in franchise history for the foreseeable future. He was among the players named as getting snubbed. Well we won’t snub him on this site, so here’s a look at his W514 card. 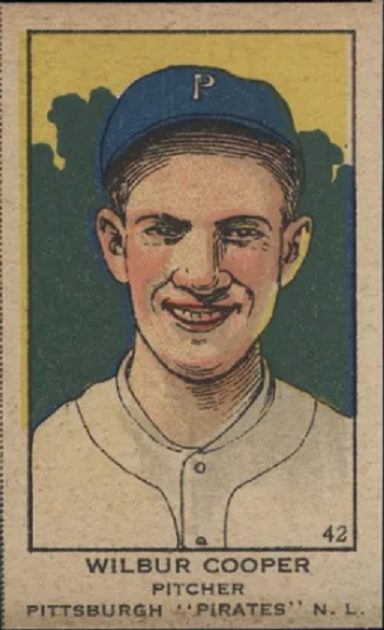 The artwork on all of the strip cards from this era can be considered crude. They did not go all out like the T206 set, or other similar sets from a few years earlier. The cards were designed to be mass produced cheap and the cut their share of corners here.

Besides the poor artwork, you also have to deal with the fact that these cards came in strips and no one back in 1919 was factoring in future value when they were separating these cards from each other. Very few complete strips still exist from this set or any other strip set from this era. This particular scan shows a card that was cut well, but not all of those cards that look really nice today were cut the same way originally.

As most of you should know, trimming cards is very much frowned upon, and cards that have been trimmed will not get a numerical grade. Strip cards can be a bit different because some of the original cuts were done so poorly that it left borders showing on all sides. Since the cards were meant to be a specific size originally, then trimming them now doesn’t negatively affect the value UNLESS they are trimmed too small. As long as you stay within the original intentions of the card, then there’s nothing wrong with putting sharper corners on the card. I would never do it personally, but that’s just me not trusting myself not to ruin the card with a slip up while cutting it. I have the steady hands of someone who just got done using a jackhammer for an hour.

As for the card itself, I would have never guessed that it’s supposed to be Wilbur Cooper on the card. There’s not much of a resemblance from what I see. I do like one thing about this card and it’s the fact that they actually wrote “Pirates” on the card. The name is in quotation marks because team names back then were just nicknames. The 42 on the card is the card number in the set. They didn’t have uniform numbers back in 1919.

Not only are these cards not that popular due to the artwork, but they’re not that easy to find either, which keeps the prices up. One of these cards has sold in the last three months and it was low grade, going for $31 in an SGC 1.5 grade. There is one active auction and it is both rare and very pricey. It’s graded PSA 8, which you won’t find many of the cards in this set in that grade. The asking price is $900. The only cards from the set that have ended higher in the last three months are ones that show Babe Ruth and Shoeless Joe Jackson.