Today’s Card of the Day choice was made while looking for a set that we haven’t covered here in this series, which has been running almost daily since March of 2020. The E93 Standard Caramel set was one of many similar sets put out around 1910. A group of them were small sets that had the entire checklist on the back and they were packed with star power. The E93 set is no different.

I had five card to choose from and all five should be names that are very familiar to regular readers of this site. One card in the set is Honus Wagner, and he’s familiar to most baseball fans. Another is Fred Clarke, who is more famous than the other three players because he’s in the Hall of Fame. Both Wagner and Clarke were just elected to the Pirates Hall of Fame as well. Then there’s Tommy Leach, who was a member of the first four Pirates National League championship teams. George Gibson is also in the set and he’s most famous for catching almost every inning for the 1909 World Series champs during the regular season. Then there’s the man in the title, who has an argument for the title of best pitcher in franchise history.

I went with Phillippe based on the timing of the other four players being in Card of the Day articles, with Gibson and Wagner both being very recent. I thought about using Clarke, but settled on Phillippe because Clark’s birthday is about six weeks away and the Deacon’s cake day is in May, so we won’t include him here again for quite some time. There’s also one other reason I chose Phillippe, which will be the first thing I mention after we look at the front of his card… 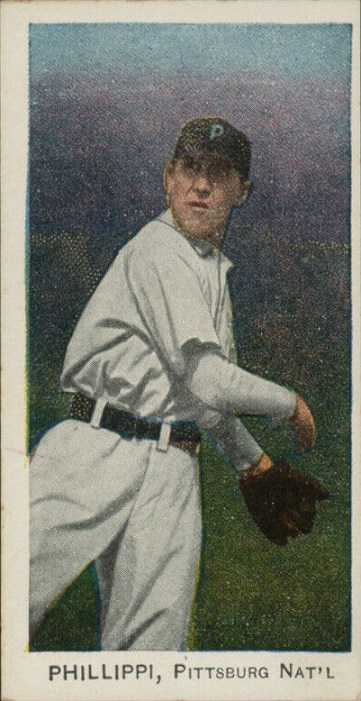 This artwork of Phillippe is based off of the same photo that the designers of the T206 set used for his card. The funny thing is that the interpreted the uniform color differently. The T206 set has him in the road grays, while this set believed that he was in the home whites. I did a Google search to see if I could find the photo and it didn’t come up, but I feel like I’ve seen it before. The cards look a bit different because of the background color (the other is an orange/yellow sky) and because they cropped the photo different. In the T206, Phillippe is more towards the left side of the card, so the break where you begin to see background starts slightly above his belt and not at the hip like the E93 card. 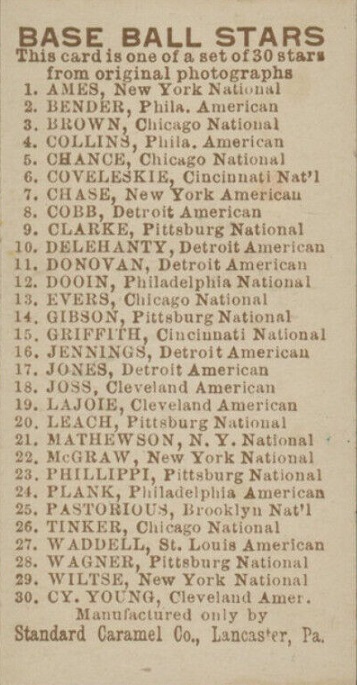 There’s the checklist, telling you that the set included 30 cards and they were manufactured by the Standard Caramel Company out of Lancaster, Pa. That’s why some people refer to the set as E93 Standard Caramel, but I’d say a majority of collectors just go with the simple E93, which was nothing more than a catalog system made up well after these cards were produced. The “E” stood for “early candy” cards and the 93 was just the next number in line. There are sets called E90, E91, E92, etc.

Some other names might sound familiar, but they are the brothers of Hall of Famers, Jim Delahanty (brother of HOF’er Ed) and Harry Coveleski (brother of HOF’er Stan). They are two interesting cards for this article because both of their names are spelled wrong on their cards, just like Phillippe.

If you’re interested in this card, there are two on Ebay right now and three have sold in the last three months that we can use for price reference. A PSA 5 went for $755+ tax. An SGC 2.5 sold for $115. A company named GAI was popular for a short time about 15 years ago and some of their holders still exist. One graded GAI 1.5 sold for $76 delivered. That one was really rough shape. The two active ones are both graded as well. One is SGC A for authentic, meaning it is real, but it has been altered in some way, likely trimming. That one is $190. The other is a PSA 3 and they want $270, though it has a best offer.