Today’s Card of the Day comes from the 1976 Hostess set and it features Al Oliver, who had a career day at the plate on this date in 1971, which you can read about in today’s history article. This is the first time for the 1976 Hostess set and the fourth time that Oliver has appeared here, the third time on his own card, and the first time was his rookie card with Richie Hebner.

It’s not a big surprise that it took this long to get to the 1976 Hostess set. Everyone who appears in the set with the Pirates has plenty of other choices for Card of the Day articles. Besides Oliver, the other Pirates in the set are Willie Stargell, Dave Parker, Manny Sanguillen, Rennie Stennett and John Candelaria. Those are all top tier Pirates from the 70s, who had at minimum decent length stints with the club. We have also covered a few Hostess sets from other years and there aren’t huge differences between the years in those mid/late-70s sets.

This 1976 Hostess set consisted of 150 cards that came attached to the box of Hostess products and there were dotted lines on the cards so people could cut them off of box. That do-it-yourself idea for collectors led to some very poorly cut cards. Most people cut them into the individual cards, but some people cut them out as a sheet (see pricing section below for an example). A few collectors were smart enough to leave the entire box together, and those complete boxes are worth a lot in nice shape. Here’s a look at one of the cut examples, card #112, featuring Al Oliver. 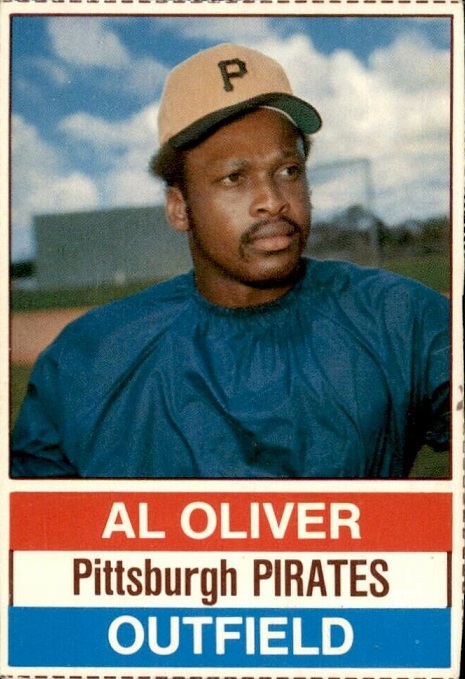 The cuts on these cards are almost always rough, so collectors give leeway with condition here, or they pay higher prices for nice cuts. Sometimes you can still see the dotted lines, some people cut inside them.

The fronts of these cards usually have a basic design for the name/team/position like you see above. This 1976 set appears to be celebrating the bicentennial, which was popular with products that year. I’m not 100% sure that was intentional, but it appears to be that way. It also has a somewhat similar look to the 1976 Topps set, which has boxes across the bottom for info, and the photo above with no other distraction or top design. 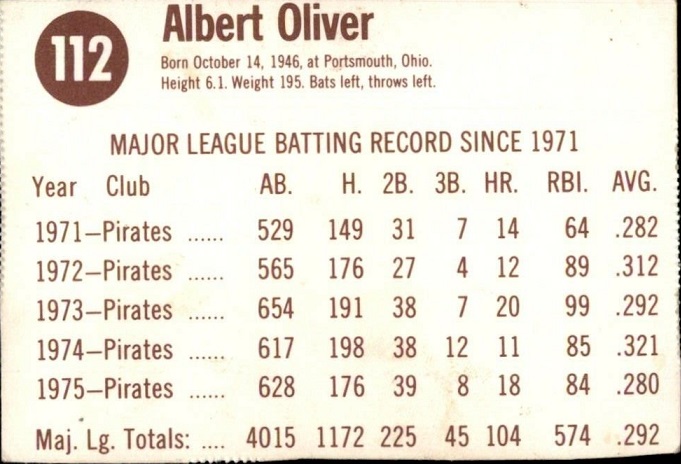 I didn’t crop the scan as close on the back on purpose so you could really see how bad the cut here. If I’m being honest, this is far from the worst cut among the ones I saw on Ebay just for this particular card. Remember that there are 150 cards in the entire set and all of them have similar rough cut stories.

All of the Hostess backs through the years are very plain looking like this one. White background, dark writing. There are limited stats, going back as many as five years, and only seven categories.

If you’re interesting in acquiring one of these cards, you’ll be happy to know that they are fairly inexpensive, especially if you can accept that bad cuts are part of the set. If you’re okay with one that looks like the one you see in the scan, then you’ll have plenty of options in the $4-$8 range. As far as better options, there’s a PSA 9 that is priced at $80. It’s hard to find them in that grade. These cards came on panels of three cards and one of those is for sale for $100, with a best offer. Before you think that price is crazy, realize that the other two players are Hall of Famers Ted Simmons and George Brett, and that card is an early card for Brett, whose rookie card came out in 1975. There’s also an autographed copy for $20, with a best offer option.