It has been eight months since we have featured one of the most popular pre-WWI baseball sets. The T205 set was last included in our Card of the Day series on the birth date of Pittsburgh Pirates pitcher Sam Leever. Today we celebrate another early player here who ranks among the top pitchers in team history. Howie Camnitz was born on this date in 1881. He’s been in our Card of the Day series twice already, but it’s been a year since his last appearances. He is a player who I was thinking about a lot recently.

The Pittsburgh Pirates recently opened up their own Hall of Fame and inducted 19 players. There were some interesting choices in there that made me instantly think about Howie Camnitz. Among the first inductees into the Pirates Hall of Fame were four gentlemen who never played for the Pirates. They were Josh Gibson, Buck Leonard, Oscar Charleston and Ray Brown. They are Cooperstown Hall of Famers who played in the Negro Leagues for the two teams that played in Pittsburgh. My first thought when I heard their names was why didn’t they include Satchel Paige in the inaugural class? That question hasn’t been answered I don’t think. My Camnitz thought pre-dates the announcement though.

The Pirates mentioned ahead of time that Negro League players would be included. My first thought that time was why not call it the Pittsburgh baseball Hall of Fame then if it includes non-Pirates? That seems to make a lot more sense. You can’t just claim other players for your team Hall of Fame. Are they going to put in Stan Musial and Ken Griffey Jr next because they are from the area? However, I quickly scrapped that name idea and started thinking about other Pittsburgh players, and Camnitz immediately popped into my head. He’s probably going to be included in the Pirates Hall of Fame at some point. I don’t see how they could leave him off, but he has an interesting case.

Working off the Negro Leagues idea, Camnitz put in two seasons with the Pittsburgh team in the short-lived Federal League, a Major League that existed during the 1914-15 seasons. If for some reason whoever votes for the Pirates HOF decided Camnitz was a fringe candidate based on his Pirates stats, then shouldn’t his time playing Major League ball in Pittsburgh in 1914-15 help out his case? I highly doubt anyone working with the Pirates right now still harbors a grudge against the Federal League, so I think we are fine there.

Let me be clear though, I don’t think Camnitz is a fringe candidate. He was a three-time 20-game winner for the Pirates. Since his last 20-win season in 1912, a mere 110 years ago, only Wilbur Cooper has three 20+ win seasons for the Pirates. Wilbur Cooper should have been put in during the first class. He’s the clubs all-time leader in wins, the only 200-game winner in franchise history. Camnitz isn’t at the level of Cooper, but I’m not pushing for him to get in next year, just at some point down the line.

Anyway, I just had to share that thought, especially since it was fresh in my head and his birthday seems like the right day to discuss his Pirates Hall of Fame merits. Today we look at a card from the 1911 set referred to as the T205 set, sometimes also called the Gold Border set. 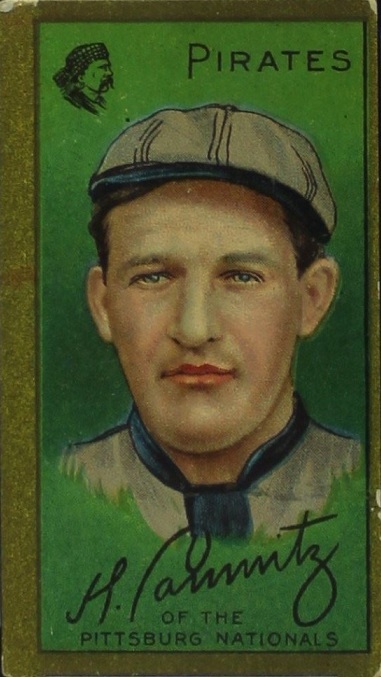 This set isn’t universally loved among vintage card collectors, but some of those collectors like it more than any other set out there. I am personally not a big fan of the set because I like action poses much better than portrait poses. Almost the entire set looks just like what you see here for Camnitz. However, there is a small subset of minor league cards and those all have action poses and slightly different front designs. If the entire set was like that subset, I would be a huge fan. I have about ten cards from this set, which includes a few minor league cards, Dots Miller, and then some cards I got cheap long ago.

I like the gold border look here, so it’s not the card design itself, more the artwork choices. I especially appreciate the fact that they included the team logo and the word Pirates. Try finding both of those things on another pre-WWI set, you’ll be searching for quite some time. Another thing you’ll have trouble finding elsewhere on early cards is the facsimile autograph. That became popular years later. Since this set was issued in 1911, the spelling of Pittsburg(h) on the card is correct. It changed back to the current spelling that same year. 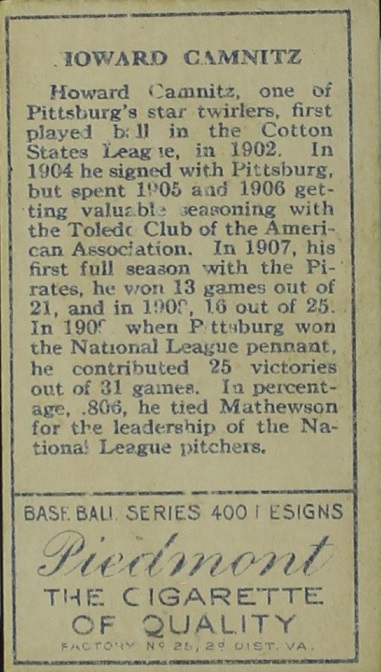 The back here is mainly an advertisement for Piedmont Cigarettes, The Cigarette of Quality. A search of available back advertisements for Camnitz on Ebay only turned up one other back, Polar Bear brand. There are a total of 11 different back brands in the set. One of the interesting things here is where the set says “Baseball Series 400 Designs”, but this set only included 198 players, so maybe there was a plan to make the set bigger. It’s not the only set from back then with numbers that don’t match the actual production. There’s a nice bio of Camnitz, telling how he got to where he was when the set was released. Some of the backs in the set had stats included instead.

These cards are bought and sold on Ebay all of the time, so despite the fact that they are 111 years old, you have choices and new ones show up from time to time. There are eight up on Ebay right now. Five of them are Piedmont backs and three show the Polar Bear brand ads. Two have ended in the last three months and one was in very poor shape. That one ended at $15. That’s about as low as these will go and you’re not going to get a decent copy for that price of any player in the set. The other ended at $55 and it was low grade as well, just not as bad. The ones listed now range from $56 to $375, with the high end copy being a PSA 6. Happy collecting!