Today’s Card of the Day is from the 1997 Upper Deck Collector’s Choice set. It’s our first time looking at that set, and the first time we check out Lou Collier, who played for the 1997-98 Pittsburgh Pirates as part of his eight-year career in the majors. Collier, who turns 49 years old today, was in the news a lot recently because his son was a top draft pick this year and the Pirates showed a lot of interest through the spring/summer leading up to the draft.

When I went back to check to see if we had previously used the 1997 Collector’s Choice set, I was surprised to find out that this is just the third set that we have used from 1997. For people who lived through the entire 20-year streak of losing seasons, that 1997 club is probably among their top 2-3 teams during that time. Known as The Freak Show, they were in the playoff race until late in the season and finished just four games under the .500 mark. Collier debuted that year in late June. His first stint with the team lasted just over two weeks, before he returned in mid-September. He did poorly in limited opportunities with a .293 OPS in 38 plate appearances, but the team was 12-6 in games that he played, 6-3 when he started.

I didn’t go into my search for a card looking for a set I had yet to cover. I went in open-minded and this card chose me. You’ll see why after you check out the front, so here’s a look at card #425 from the 1997 Collector’s Choice set, featuring Lou Collier. 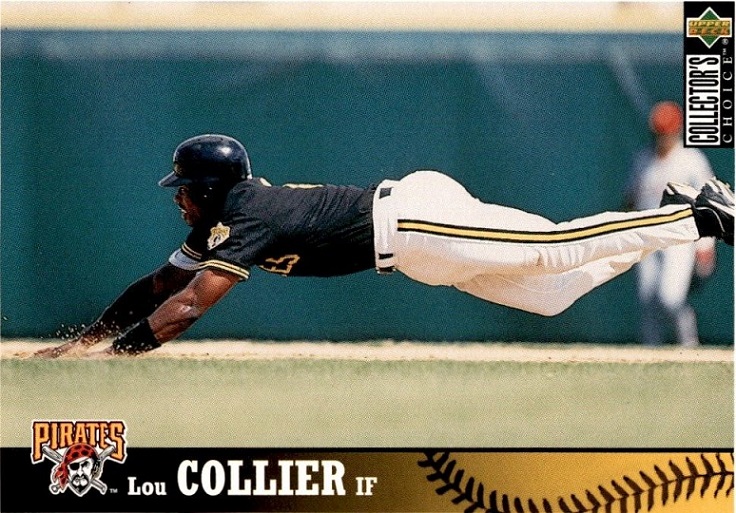 You can see why I chose this particular card right away. I’m always a fan of horizontal layouts in sets where a large majority of the cards are the stand vertical layout. The horizontal cards usually have a great action shot and this clearly qualifies as a great action shot. That’s some great timing on the photo and the layout helps out immensely here.

One really interesting thing here you rarely see on cards of active players (at the time) is different logos on the card. Look at his sleeve patch, then look in the bottom left. That logo in the bottom left was new for 1997, and the one on his sleeve is the one that logo replaced. I like them both, but the earlier one is higher up my list. The design for this set is nice looking. By now the borderless photos were all the rage and this one is approximately 3/4 borderless. The horizontal layout here led to more of the card being covered by the bottom border design. I like the fade to black idea with a baseball, and it has a feel of being Pirates colors, which was intentional. 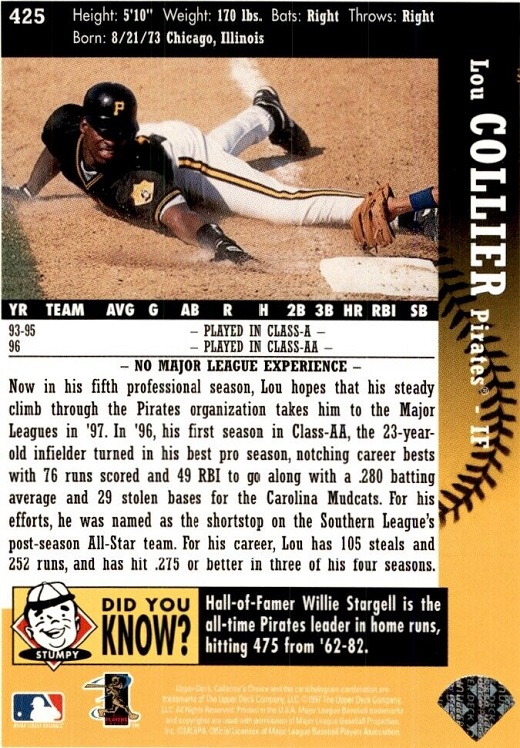 The back has the typical vertical layout, but it’s interesting that the picture they chose for the back photo is so similar to the front photo. You also see the old logo again. Just like the front, the border design here matches up with the team, except you get more of the gold color here.  It’s really odd here how they just skipped giving stats instead of letting you know that they were all minor league stats.

I think everyone here knew the “did you know?” fact. If you didn’t, click the search icon up top here on this page and get to work. This card had the Upper Deck hologram on the bottom right corner, something they introduced to cards to help prevent counterfeiting.

These cards aren’t rare, but not a lot are listed on Ebay either. You have 12 options and the cheapest few are all under $2 delivered. The only auction of note is an autographed copy that has a $17.69 price tag. Hppy collecting!