Today’s Card of the Day subject is Willie Montanez, who the Pittsburgh Pirates acquired in a trade with the Montreal Expos for John Milner on this date in 1981. It was an odd deal in that the two players were basically playing the same role as lefty hitting pinch-hitters, who played first base. Neither was doing particularly well in their limited role and both were unknowingly nearing the end of their careers at the time.

The locals papers said that the reason the trade was made was that Montanez played better defense at first base and the Pirates wanted him for that reason, while the Expos wanted some power off of the bench and Milner had a little more power. Both played with their new teams into the 1982 season, and both were released during that season. The catch here is that shortly after Milner was released (five days after Montanez), he re-signed with the Pirates. Despite being with the Pirates for 4 1/2 months of regular season time between 1981 and 1982, Montanez batted just 74 times. 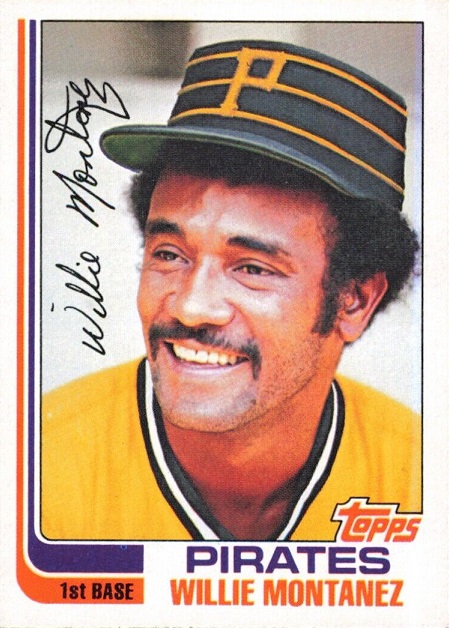 I have seen this card countless times in my life. I have it as a single card. I have it in a team set I put in a binder containing all of the cards from the big three companies that year. I have the card in the actual full set. Just today I’m noticing that this is an airbrushed photo. That makes sense as he joined the Pirates late in the season, giving Topps little time to get his photo. Fleer got a picture of him with the Pirates, but it appears that Topps didn’t get one.

This is one of the better airbrush jobs, though once you see it, you can’t unsee it. The collar is usually the giveaway when they change from one team to the next. However, I noticed the darker gold/yellow in the hat, then looked at other cards from that year and saw that the “P” is between the top and bottom lines for everyone else. There is clearly space between the top/bottom of the letter and the lines on every other hat…except another airbrush job from the Traded set. Whoever airbrushed this here didn’t notice that detail, so that letter is a lot bigger here than on any of the other hats you see. Also, the underside of the brim is green here, just like the Expos hat, for example. The Pirates are gray underneath. As I said, the rough drawing on the collar is usually the giveaway, but I was first drawn to the hat and there’s a lot wrong there. 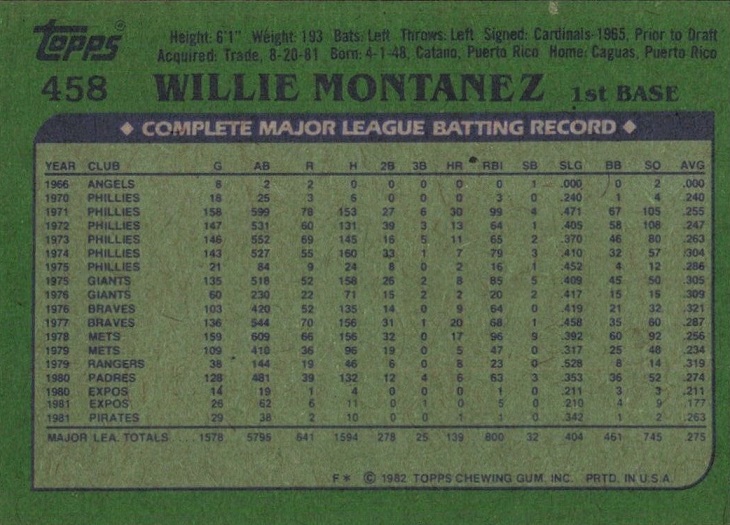 I like the look of the 1982 set on front. It’s right there (way) behind the 1981 and 1987 sets for me. I second tier it with the 1985 set. I say that despite them giving the Pirates players orange and purple colors for the design. That all being said, I don’t like the back from this year and Montanez is the perfect example of why I say that. Do you know how awful that is to try to read with the card in hand? I wouldn’t recommend doing it too much if you enjoy your eyesight. Willie Stargell is another player where it is impossible to read the stats. Who thought those colors were a good combo to read small print? If you know the backs of Fleer and Donruss from 1982, you know that they put a little more thought into your well-being.

Montanez had a decent big league career. At least it looks that way on the card (don’t try to read it, go to Baseball-Reference or some other site). However, modern metrics have not been kind to him. His first full season in 1971 was worth 1.9 WAR, when he hit 30 homers, drove in 99 runs and finished second in the Rookie of the Year voting. His 14-year career, 1,632 total games, is worth 1.6 WAR. Ouch. That’s 13 years of being very replacement level to the tune of -0.3 WAR.

If you want this card, it’s easy to find on the Ebays. There are some autographed copies, four to be exact, and they range from $12 to $18 delivered. There’s a rare blank back version, which occasionally got past quality control. That is $20 delivered. After that, you have the common cards and you just need to watch the shipping. You shouldn’t pay more than $2 delivered. A total of 43 sellers have it between $1.50 and $2, while some charge $3.99 for shipping, which is ridiculous.