On this date in 1988, the Pittsburgh Pirates traded Mike Diaz to the Chicago White Sox for Gary Redus. It turned out to be a one-sided deal, though that’s only because the Pirates were able to re-sign Redus as a free agent (twice). He was part of their 1990-92 National League East title run, while Diaz ended up spending most of his remaining career in Japan.

This is the second time that Redus has appeared in this series, and by no coincidence, the last time was a year ago today. The 1989 Topps set hasn’t been here in an even longer time. The last appearance here for that set was back in May of last year, when we looked at the card of first baseman Orestes Destrade. He was a player who became expendable because of Redus. So now we look at Redus and the 1989 Topps set again, as we check out card #281 in the set. 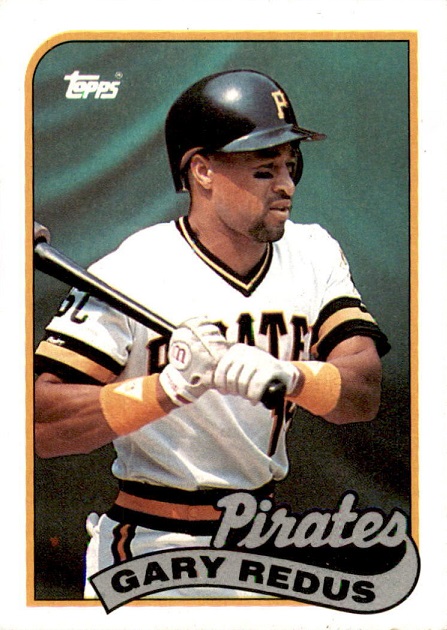 I think I owe the 1989 Topps set an apology. I recently said how bad the 1988-1990 run was by Topps for front designs. This one doesn’t belong with the other two sets. The 1988 design is boring and the 1990 set is hideous looking. This one is not as bad as either of those two, and it’s really not that bad in general. I think part of the dislike is just how many of these cards Topps produced. There are so so so many of these 1989 Topps cards out there.

Topps matched up team colors here, with the gold border around the photo for Pirates players. However, they went in a different direction with the team/player name section. If you check scans of other teams, you can pretty much tell the team without actually reading it. That is until you get to the Pirates, who got the color silver and black because they’re easily confused with the (insert city where the Raiders were in 1989) Raiders. Don’t get me wrong, I actually like the look of the team/player name section here, but for some reason the Pirates don’t match up to team colors like everyone else. 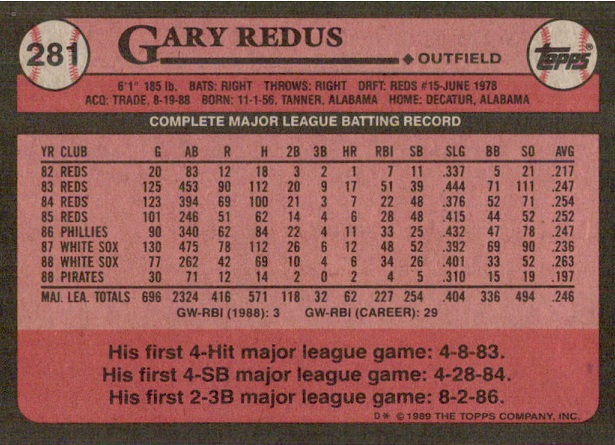 The back of these cards are average at best. They included only his big league stats, so you lose out on seeing his unreal season with Billings of the Pioneer League in 1978, when he put up a .463 average and scored 100 runs in 68 games. Not only was his average a video game number, he nearly drew one walk per game (62 walks), he hit for power (42 extra-base hits) and he stole a lot of bases (42 to be exact). Yes, all of that really happened. He won a batting title by 82 points, or in other words, the distance between him and the second best average in the league is bigger than the difference between second best and 40th best.

For those who don’t know, the stat under the stats is game-winning RBIs. Baseball kept track of that stat for a few years until players started using it to win arbitration cases, and then it disappeared like it never existed.

This card is easy to find, with just under 100 auctions currently up on Ebay, so you can get it from many sellers for $2 delivered or even less. There are some cards of interest that are a little more expensive, but not much. There’s only one autographed example and it’s $5, with a best offer option. There are two Topps Tiffany cards, which are Glossy versions of the regular card and harder to find. Those are about $6 each. There’s an error one that has the wrong back (Gary Carter All-Star card) and that is $6 delivered. Then there’s a Rediscover Topps card, which were inserted in packs in 2017 and have a stamp that says Rediscover Topps. That one is $8 delivered.