Despite being featured in this series more than anyone else, we haven’t used a lot of Topps cards of Roberto Clemente from his playing days. We have featured some oddball series cards, as well as some modern cards that were really eye-catching. However, we have only looked at his 1955, 1956, 1958 and 1973 Topps cards. The 1955 is his rookie card and the 1973 card is his final card from his playing days. That card is great because you get his entire career stats on the back.

I’ll admit that I have avoided some of his cards because Topps put “Bob” for his first name and no one refers to him that way now. While it’s not exactly the same thing, imagine getting a Honus Wagner card that says John P. Wagner. You might not even realize who that is if you see the name that way, though the photos of both players would always give it away. I’m going to get to those cards eventually, because there’s no chance I never post the 1962 Topps card. That set is one of my favorites and his card is one of my favorites in the set. It’s his birthday today, so we are sticking with the cards that call him Roberto and we are going with his 1970 Topps card. 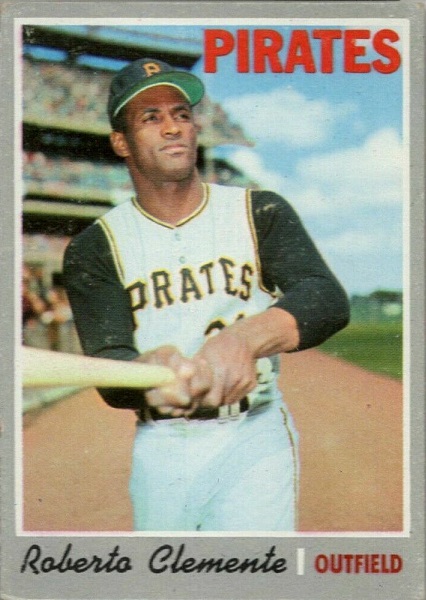 The 1970 set was the year that they returned to the Roberto name on the card. I’m a big fan of the look of this set because it represented something different. Even when Topps went different with the borders in 1962 and 1968, they had a design to those borders, but the all gray look here really stands out…until they went all black with the border in 1971, which is also a set look I really enjoy. I’m sure if Topps went all gray borders all of the time and then threw a white bordered card in there, it would be a card I really like as well, because it would stand out for its uniqueness.

All of the cards in the set had black cursive writing for the name and red writing for the position. However, the team name color up top changed, even within teams. There are Pirates players with the team name written in either white, yellow or black letters, as well as the red you see here.

I like this Clemente card in particular because of the pose. It’s a common staged action pose used by Topps but it just looks great here. A very stoic look and a great background shot as well. It’s almost perfect, or should I sat prfect. The stage action eliminated the “I” in Pirates. I’m sure it’s there, you can see the uniform fold a bit where it should be, but it’s one of those things that once you see it, you can’t unsee it. 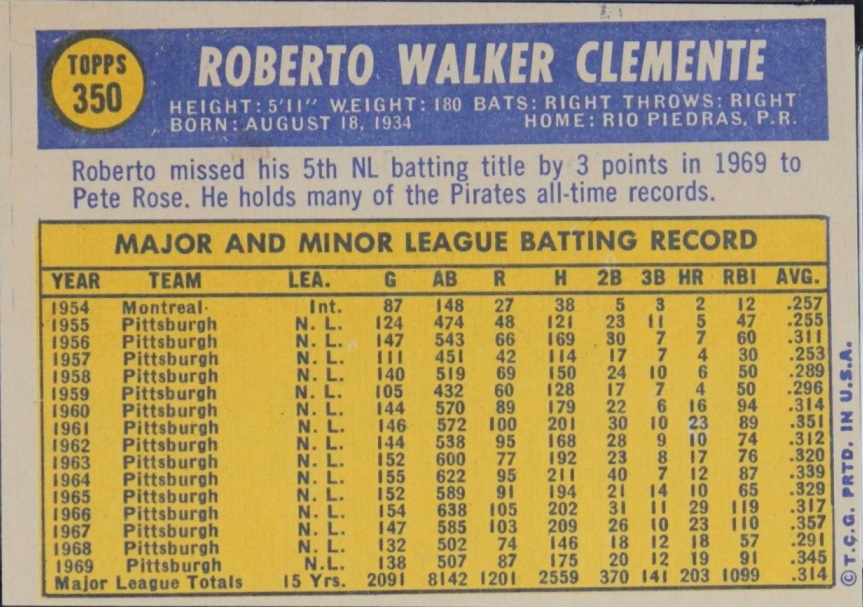 The back scan of this card isn’t the same exact card as the front. I pulled them from two separate Ebay listings, mostly because the back scan was blurry for the front scan you see above. I almost didn’t use this scan above after I saw it, but then I decided to because it has a bit of a printing flaw that I don’t believe that I’ve mentioned here before. This card has what collectors call a diamond cut from the factory. It’s when the angle of the corners aren’t all 90 degree angles, so you got one side of the top/bottom borders looking like it has a bigger border than the opposite side. You can also see a printer mark going down the left border at the top here. If this card was cut currently, you wouldn’t see that guide mark. Also, the stats wouldn’t look like they were on an angle if they cut the card right. It was a bad day for quality control at Topps that day.

The fact on the card here above the stats section is relevant to another card in this set. Topps included league leader cards in 1970 (and other years) and there’s a card with Rose as the batting champ, followed by Clemente and Cleon Jones, who finished third in the batting race. All three are pictured on the card, but that year the league leader got a bigger photo.

All Clemente cards are popular with collectors, so that makes this an easy card to find on Ebay in any grade (not PSA 9/10, but everything else, graded and not graded).  You can buy this card in a huge price range depending on your budget. The most expensive one on Ebay right now is $850 for a PSA 9 with an off-center qualifier. A PSA 7 can be had for $220 (or more if you want to pay more). The cheapest Clemente on Ebay right now is only $17.50, but it is in very rough shape. I think you want to be right around the $30 range if you’re okay with a lower grade. That’s about the price point where the flaws don’t really affect the look of the card as much.