Today’s Card of the Day choice is from one of my least favorite sets, but the picture on the card is what won me over. While trying to match up today’s card choice to the history article, I decided to choose between Johnny Rawlings and Bill Landrum. Both were part on playoff teams, though Rawlings gets the nod in that department because he played for the 1925 World Series champs. Landrum got the nod for this article because there was nothing available to use for Rawlings. So basically everything evens out for them. Rawlings wins a World Series, Landrum gets a Card of the Day feature.

As I said, the photo on this card is how I made the decision. As a general rule of thumb, I don’t feature the 1990 Topps set here unless there is a good reason. It’s an awful front design choice, looking like a little kid won a contest to design the set and they had to do whatever he said. This card set just feels like anything you see from the early 90s for kids.

I guess in a way that is good marketing by Topps, but these cards don’t stand the test of time. They also over-produced them to the point that you could wake up every morning for five years, take a pack of these cards and set them on fire and no one would ever notice a difference in the population of these cards. If you have commons from this set, they will never be worth anything (unless you convince numerous people to do the five-year pack burn). On the flip side, if you want to collect 32-year-old cards, you can find these anywhere for cheap. Here’s a look at card #425 from the 1990 Topps set, featuring Pittsburgh Pirates pitcher Bill Landrum. 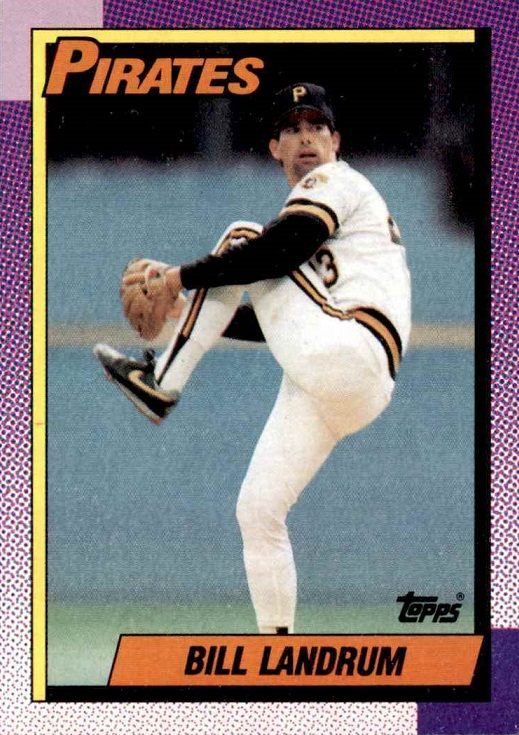 There’s the photo that convinced me to use this card, but I actually looked to see if I could find something similar before I settled on the 1990 Topps set. One was close, but not exactly what I was looking for with his windup. It’s where he knee is between his hands, like he’s hugging his knee. Look at where his glove is compared to the hand holding the ball, which you can just barely see. How did he have success like that? It feels like he would be hitting the glove sometimes with his knee or shin or shoe. This picture feels like it isn’t possible to do that and throw a ball 90+ MPH in one motion, at least not do it consistently while throwing strikes.

I thought maybe I just never noticed that this happens when I first saw it and figured it was probably more common than I thought. I’m 100% positive he isn’t the only person to ever do this while pitching. So I searched our site library for prospect/Pirates photos and I couldn’t find anything close to looking like that. I showed this to someone who sees a lot of pitching and he said it looks like the jack-knife pose when you dive in a pool and hold one knee up. I pitched a lot growing up, so I even got up and did my windup just to see where my knee was at that point. Nothing. It’s interesting to say the least.

So yeah, that’s why I use this awful looking set. That front design is hideous and it’s even worse that they just randomly mixed colors throughout the set. There are worse ones than this border/front design. I feel like I should be watching Saved by the Bell re-runs. 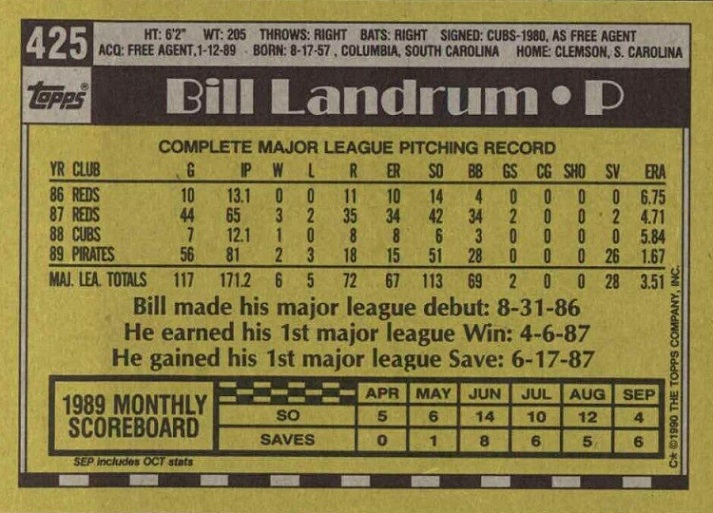 I don’t like the backs of these cards either. Someone saw strained peas and thought that would look good on the back of the card. I like the monthly scoreboard idea, but why do they tell you that September and October stats are combined when they clearly could have just added October? You designed it, make the strikeout/saves boxes smaller, or move it over to the left a little, or make everything smaller, or the “1989 Monthly Scoreboard box could be smaller, or just write SEP/OCT in that box. There are so many options! Also, why are the months abbreviated below it when they had the entire bottom to use? Just spell out the months! Someone took time to design that, added a checkered flag to it just because they like NASCAR, and it got approved, and then no one said anything because they were so mesmerized by the pea green color. Did I mention that I hate this set? Yet somehow I still had a lot of fun writing this article.

Let’s pretend you want one of these cards. There are 85 options on Ebay and most are under $2 delivered. Just one has sold in the last three months, so you don’t have to hurry to buy one. There are two noteworthy options. He has autographed some, and if you want one of those (he has a nice autograph), you can get it as cheap as $4 delivered. Then there are also two options for the “rediscover Topps” cards, where they included old cards in new packs and put a stamp on them. I don’t know how collectible they are, but I bought one just to have one and can’t even remember what card it is right now. Anyway, that can be had for $4 too.