When I decided to feature pitcher Rick Reed in today’s Card of the Day article, I didn’t think that there would be an option for 2004. He played for the 1988-91 Pirates, so that’s the time-frame I was looking for with one of his cards. I just updated his player bio on our site, so I knew that he was with the 2004 Pittsburgh Pirates. In fact, it was the last thing I updated before searching for one of his cards. If you didn’t already read today’s daily history article, this is a spoiler alert.

The reason I didn’t think that there would be a 2004 option for Reed is that he signed with the Pirates in late January and was cut at the end of Spring Training when the team wanted to send him to Triple-A and he wasn’t willing to go back to the minors, which ended his pro career. His time spent with the Pirates in 2004 was two full months and a few days.

What makes today’s card even more impressive is the fact that Reed is pictured with the Pirates. Think of the timing involved in that. Clearly they weren’t getting the picture during his first few weeks with the team because it was the off-season. I would assume that they also didn’t get it late in Spring Training because there wouldn’t have been enough time in between the photo and printing of the cards, unless they just decided to go with it even though he wasn’t with the team any more. I don’t know the exact date, but they started distributing these cards during the month of April in 2004. That left a small window to get this photo and include it in the set before it made sense to not include it. Once it started printing, then they were just stuck with it because he didn’t sign anywhere else.

If you didn’t know about Reed’s Spring Training-only stint with the Pirates, then this card wouldn’t make much sense. Today’s article is a look at card #464 from the 2004 Topps set, which is just our second look at this set. The other one features Reggie Sanders. If you look at that link, you will see that Sanders is card #2 in the set and he’s pictured with the Pirates. He played for the 2003 Pirates and then signed with the St Louis Cardinals in December 2003 as a free agent. That timeline wouldn’t seem to make sense unless you knew that Topps released the 2004 set in two series of 366 cards each. Sanders was in the November series and Reed’s card number tells you that he was in the second series. Here’s a look at his card. 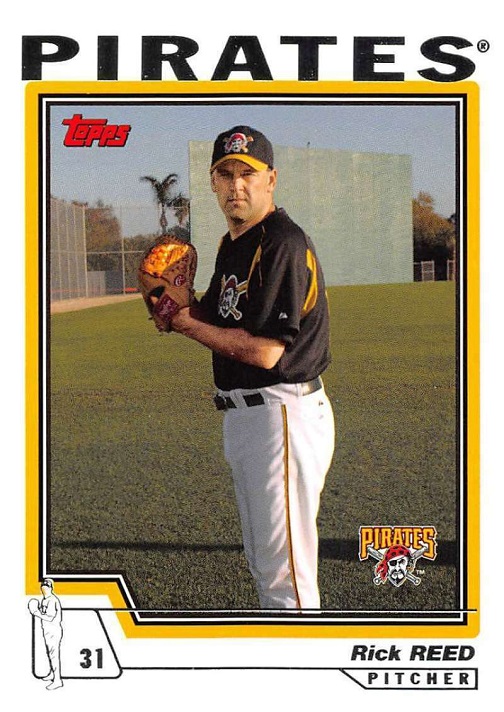 I’m not 100% sure, but that does look like a photo taken in Bradenton on one of the back fields. That’s Rick Reed at the end of his career in a full Pirates uniform, 13 years after he last played for the team, and that’s definitely a 2004 uniform (not that there was a question, more of recognizing the uniform from that year).

A few things to point out here about the card. Use of the Pirates logo on the front is always appreciated, especially when you get it two other times on the uniform/hat. Topps color coordinated with team colors this year, so the Pirates players got the gold photo border. The image down at the bottom isn’t a coincidence that it’s the same pose as the photo of Reed. Topps brought back an old idea of using an image in the bottom, but unlike the previous time, the image in 2004 wasn’t just generic for each position, it actually matched the picture on the card. The old idea had the same exact pose for every catcher, every right-handed pitcher, every outfield, etc., regardless of what the players were doing in the card photo. In case you were wondering, Reed wore #31 with the Pirates. That’s the uniform number next to the outline of his picture. 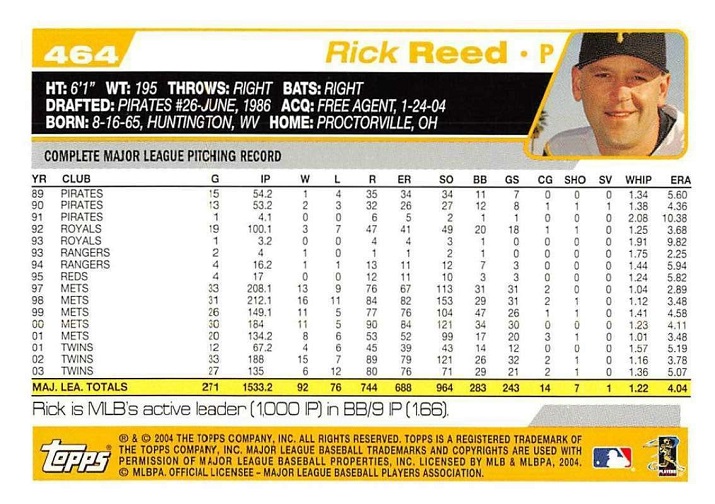 Not only did Topps match the colors to the teams on the front of the card, they also did it on the back. They added a second photo of the player and it was different from the first (not always the case with every set), except this one with Reed basically had the same pose, with him looking directly into the camera in each photo. I wonder if they took the photos the same day and had him change uniforms, or they just got him a second time some other Pirates photograph day. My guess is the first because it’s more efficient.

One note on the card and it’s that you get to see his entire big league career here. You can see it took him quite some time after he left the Pirates before he was a strong big league pitcher, and then he had a nice little run from 1997 through 2002.

This card has a few different versions. The base card you see here abides by all rules and regulations governing common cards on Ebay. In other words, don’t pay more than $2, including delivery and tax. There’s a rare black border version that was numbered to 53 and a few are on Ebay right now, as low as $12. There’s a gold version numbered to 2004 (matches the year) and that can be had for as low as $2.50. Then you have a ton of other random ones, with sellers on Ebay currently listing a Gold Refractor, Black Refractor and a Chrome version all around $4 each. There’s one First Edition, which is $5 with most of that being shipping. There’s a Chrome Refractor and a Gold Chrome Refractor and a Red X-Fractor, all under $8 delivered. It’s a lot to go through and you really need to want a tougher-to-find card of a common player to be interested in those options (maybe you’re putting together a set of a certain chase card, who is to say). Basically, you have a lot of options.