There are certain days when I look at cards from the 1975 Topps set and say quietly to myself “These cards aren’t so bad”. It’s never a real declaration that I might like the set, but it’s more like maybe I’m too hard on the set. It’s just trying to fit into the 1970s, at least what I’ve heard about the decade. I was too unborn to remember that time period.

Then I see cards like today’s Card of the Day subject, featuring Pittsburgh Pirates catcher Duffy Dyer and I realize that my dislike is warranted. He was with the team during the 1975-78 seasons, joining them early enough in the 1974-75 off-season to be pictured on the Pirates in the 1975 set. He didn’t move on to the Montreal Expos for the 1979 season until after the 1979 Topps cards were already set for printing, so he ended up on five Topps cards with the Pirates (he also has an SSPC card from 1976).

If you know how a calendar works, then you know that there is no chance that Topps had a photo of Dyer with the Pirates for their 1975 set. That leads us to this monstrosity. 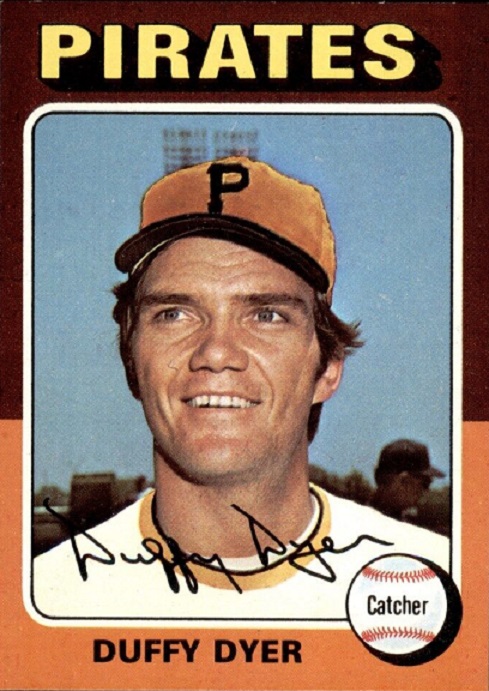 That is a completely airbrushed Pirates cap that he is wearing, along with the color being changed to fit Pirates colors on the uniform collar. This is probably a 1974 Spring Training photo of Dyer with the Mets, so their team colors have been eliminated here. What makes matters worse is the brown and orange border combo here. Why is that a thing? Some of these two-color borders look fine. Others are acceptable, but some of them are just hideous. In my opinion, this is the worst. Funny thing about this card is that you can find people listing him as being a member of the San Diego Padres, and it does give off that 70s Padres feel.

Between the bad airbrush and bad color combo, this card is just awful. The poor guy is smiling too, unaware that a year later his pictured would be used this way. 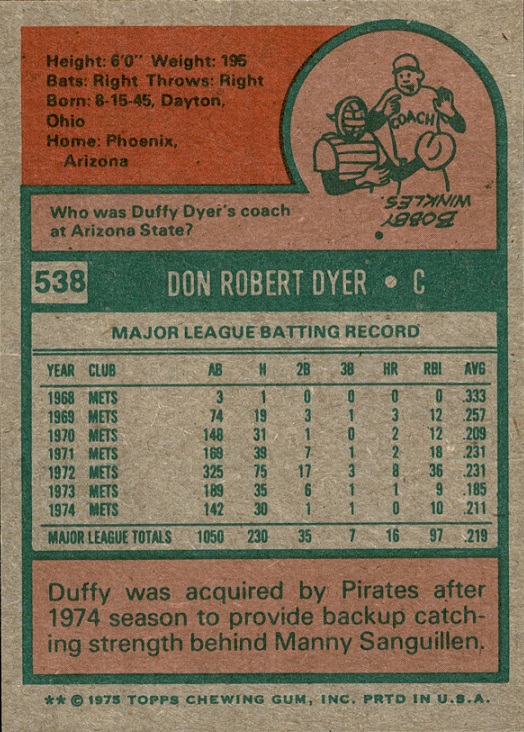 I like the look of the backs of the 1975 set a lot better than the front, especially this particular front color combo. I don’t know if I’ve mentioned it before, but the 1975 backs had only seven lines of stats. In 1976, Topps added games and runs to the categories, before eventually adding more. The “seven stats” backs for Topps came along in 1973 and lasted three years. If you go back to 1972, they also had games and runs that year.

I often mention that I have some strange mental block where my eyes go right to the trivia answers before I see the question. I usually follow that up by saying I think I would have got the answer. My brain is filled with useless baseball trivia. That being said, there’s no way I would have got this one (spoiler coming up). I know who Bobby Winkles is, I have two of his cards from his manager days, but I would have never guessed him for that answer.

This card is all over Ebay. You have just over 200 options for it. There are slightly fewer if we are only talking about the regular Topps card. That year they also issued mini cards that were exact replicas, except for the size. Then there are also O-Pee-Chee cards listed, which comes from the Canadian cousin of Topps. Those are the same on front and a bit different on back, with the same general look. I’ll stick to the regular issue cards, and you still have over 150 options.

The most expensive is a PSA 8 for $62. However, you can get a PSA 8 for as little as $34, and an SGC 8.5 for just over $20 delivered. A PSA 9 sold for just under $60 recently, so don’t pay more for a lower grade. There are 15 autographed copies and you’re going to be around $8-$10 for one of those cards. He signed some in pen, but in my opinion (which is shared by most), you want the blue/black marker signatures. They show up much better than pens. If you just want a regular mid-grade unsigned/non-graded copy, it can be had in $2-$3 range delivered. There have been 33 copies of this card sold in the last three months, so it trades fairly well.