The Pittsburgh Pirates franchise had a major tragedy during their first season in the National League that is mostly lost due to time, with very few people who know about the event now. Alexander J. McKinnon was born on this date in 1856 in Boston, Massachusetts. He played four seasons in the majors, starting his career at 27 years old with the 1884 New York Gothams, which is the current day San Francisco Giants. He had the fifth best WAR on the team, trailing Mickey Welch, Buck Ewing, Roger Connor and John Ward. That’s four Hall of Famers and a group of all-timers at that. Welch was one of the first 300-game winners. Ewing was considered to be the best all-around player of his day. Connor was Babe Ruth before Ruth existed. Ward was a strong pitcher-turned-shortstop, who was one of the most important figures in 19th century baseball.

McKinnon spent the next two seasons with the St Louis Maroons, a defunct franchise that lasted three seasons (1884-86), and he’s the fourth best player (according to WAR) in the short-lived franchise’s history. The Pittsburgh Alleghenys, who were moving from the American Association to the National League, acquired McKinnon in a trade in December of 1886. He was their starting first baseman and he got off to an outstanding start in Pittsburgh, batting .340 through 48 games, with 26 runs, 21 extra-base hits and 30 RBIs. He became ill in early July and left the team on July 4th to go home to recover. While he was doing better for a time, things took a turn for the worst. On July 24th, McKinnon passed away at 30 years old due to typhoid fever.

Today’s Card of the Day features McKinnon on one of his 1887 N172 Old Judge card. The photos for these cards were taken in mid-May of 1887, approximately six weeks before he became ill. As you can imagine with the timing of the photo and then producing and distributing these cards, people were getting card of McKinnon in packs of Old Judge cigarettes after he had already passed away. Here’s one of his four poses from the Old Judge set. 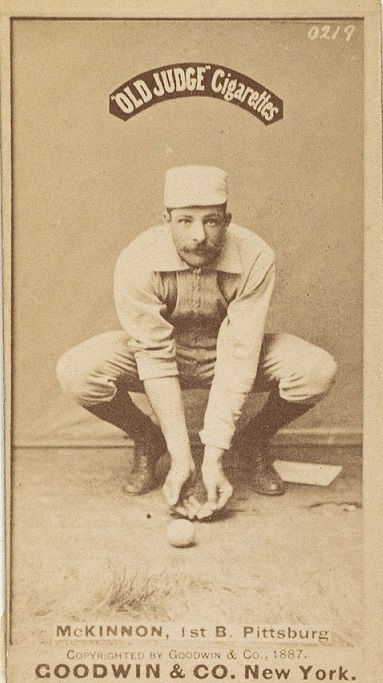 Many of the Old Judge photos were staged action photos. They were taken in studios and sometimes had a backdrop that was designed to make the players look like they were outside. Only a handful of the cards in the giant set (over 2,000 different poses/500+ players) were actually taken outside, with those being pictures of the players on Brooklyn and the ultra rare California League cards made in 1889.

The photos like you see here were the early attempts to simulate baseball action. You can see what looks like grass in the picture, but it was just a rug in the studio. They also had what appears to be a base behind his left foot. Some of the other photos in the set show a play at second base with a second player getting tagged, while others would have a ball on a string and a player looking like they were about to catch the ball or swing at it. One thing that is great about this McKinnon shot is how he is looking into the camera, so you get a great look at him. I say that because many of this fielding ground ball poses have the player looking down at the ball.

This photo is just captivating to me because of the timeline of the photo, his instant success in Pittsburgh, and his untimely passing.

The Old Judge Cigarettes sign over his head was actually added to the photo afterwards, and you can find all different ad placements, or no ads on the photo. It’s an amazing set with so much to learn. I highly recommend the book written on the set if this card interests you. It’s pricey, but it’s well worth it. I actually helped write well over 100 of the player bios in the book and was part of the proofreading team.

If you’re interested in this card, I’ll start by saying that you shouldn’t get stuck on a particular pose. This card you see here probably has 20-30 copies available and about 20-30 of those are in the collections of people who hold on to these cards. I have all four McKinnon cards and don’t plan on selling them any time soon. If you find one of his cards in decent shape (VG to VG/EX grade) you’ll pay about $350. These cards need to be in awful shape to end under $100, usually trimmed and possibly missing the cardboard backing that the photo was attached to. If you find them in a PSA/SGC 5 or higher, the price will get into four figures, even for common players with the higher grades.