As a rule, I don’t write about the same set on back-to-back days, and I really don’t even try to post about the same set within months of the previous article. I’m making an exception today with the 2010 Topps set. The thing here is that today’s card couldn’t be any more different from yesterday’s card if they tried. Yesterday was an autographed card of Jose Tabata, which looked like one of your typical new shiny cards, and it featured (at the time) someone who was just making their big league debut. Today’s article subject is the legendary Honus Wagner, who is featured on a throwback Topps design.

I did not know about this card until yesterday. Okay, maybe I did at some point since I check out the new cards every year to see what vintage Pirates player shows up. If I did know about it at some point, I forgot about it until yesterday when I was doing some reading about the 2010 Topps set (the peak/peek spelling piqued my interest). Topps had an entire subset of older players on newer designs, with variation cards for players that were tougher to find. I did not pick the tougher Wagner card as today’s featured card because I wanted to prove something with this particular card, as you will see in the front description just below. Let’s get to it! 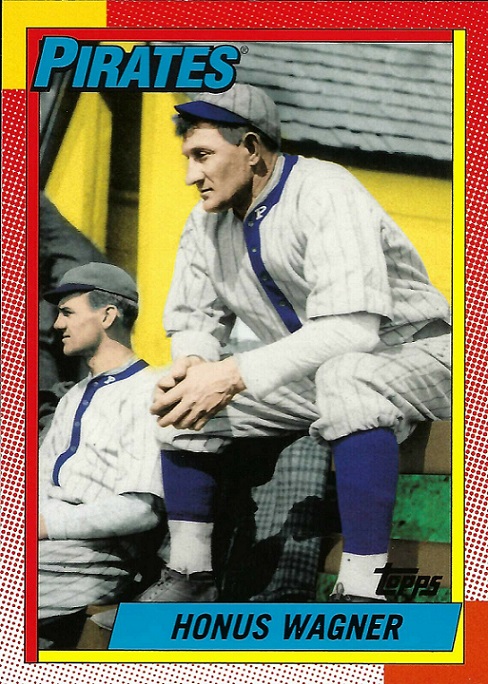 Usually I match up the Card of the Day subject to the History article from that day. I wanted to post about this card immediately, so I strayed from that formula only to realize that the other Pirates player in the photo here is Max Carey, and he’s a big part of today’s history article. Funny how that worked out.

This front design is from the hideous 1990 Topps set that reminds me of the show Saved by the Bell. It’s just random colors and dots and other colors, looking like a little kid designed it and Topps had no choice but to use it. Even the Pirates cards in this set can’t save the look. The worst part is that they massively overproduced the cards, so they will never go away. All that being said, put a photo of Honus Wagner and Max Carey on the card and colorize, and you have something that is acceptable. I actually like this card, but it helps that the old historic photo draws away from the rest of the card.

I have more on the photo here in the back section. You’ll soon see why I decided to do that… 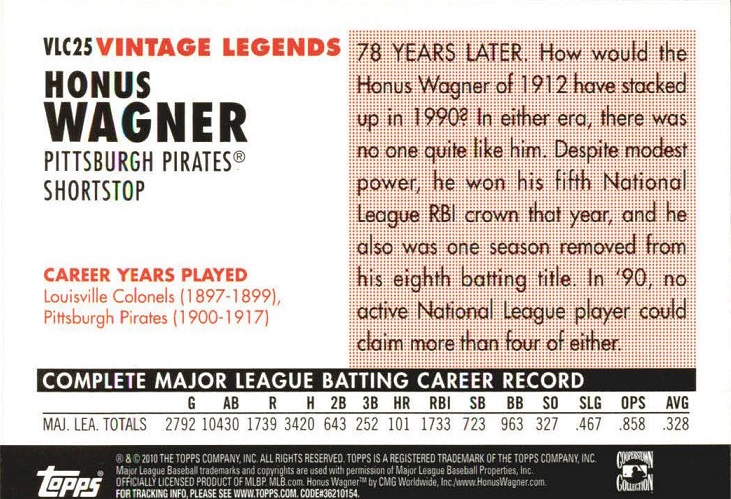 The back did not go with the 1990 design, which isn’t necessarily a bad thing because the back wasn’t much better than the front, it just ruins a bit of the throwback design idea. It appears that Topps is saying that the photo on this card is from 1912 (78 years ago to 1990), but it is not. Even if you know minimal about the jersey history of the Pittsburgh Pirates, the 1912 jersey should stand out in your memory. That’s the first year that “Pirates” was written on the jersey. It was also a one-year design, which switched in 1913 to the uniforms you see here. That particular uniform was used for two years, so you could give a rough estimate and just say this photo is from 1913-14. If you want to be more specific though, this was a Spring Training photo from Hot Springs, Arkansas, which is dated as 1913. You can actually find this photo in a few places on the interwebs, sometimes with Carey cropped out. As far as old baseball photos go, it’s famous in that realm.

There are 11 of these on Ebay right now and they range in price from $2 to $6, with the only difference being those people who charge high shipping for everything. You’re going to want to be in the $2-$3 range. The only completed auction went for $1.88 delivered (not including tax).