Today’s Card of the Day had me questioning my ability to spell until I realized the clever thing that Topps did in 2010.

I don’t really collect a lot of new cards each year, but I always look through them and see what I might like. I have cards from every year, though my focus has always been older cards. I don’t ever remember seeing these Peek Performance cards from 2010. I think I would have remembered the spelling part of it. Topps put out cards in their regular series called Peak Performance, where they highlighted certain stats on the card, and some of those cards came with jersey swatches or autographs.

In their Update set that year, Topps included cards that were called Peek Performance and they served the same purpose, highlight something about the player, while including autographs. I saw the Peek Performance card first because that’s the series that includes Pittsburgh Pirates outfielder Jose Tabata, who is celebrating a birthday today. I figured it was an error. In fact, the first listing I saw for the card said “peek/peak” in the title, which led me to believe that there was a corrected version. Once I couldn’t find the corrected version, I did some searching and finally figured it out on my own. The Peek cards were for prospects, and you were getting a sneak peek at them. Well played, Topps. Well played.

There’s another part to this long intro and it’s something that happened yesterday with Woody Jensen. We have a saved photo of Tabata on this site to use any time his name comes up and it’s a baseball card. That led me to believe that he appeared in this series already and we used that card for the article. This is actually his first appearance here as a Card of the Day subject, something I just learned when I went to link the other article that doesn’t exist. 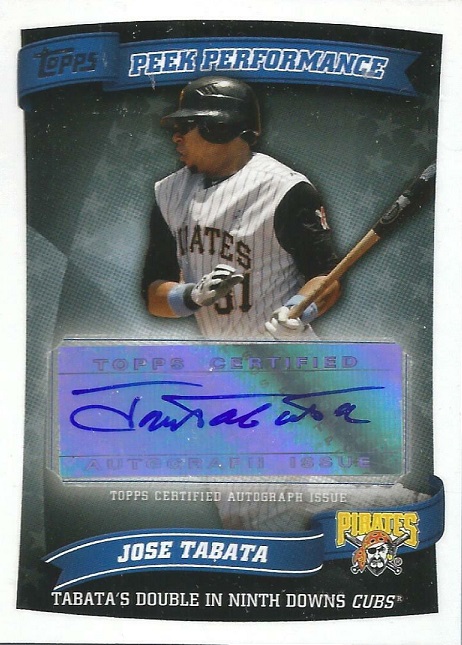 We all know that Tabata didn’t have a great career. He was a serviceable player during his time in Pittsburgh. I never saw someone who reacted like they had season-ending injuries so many times, only to return in 2-3 days. He was not good with pain. Playing a full season of baseball will result in some bumps and bruises along the way. I’m not saying that’s the reason he didn’t reach his potential, he never really developed the power scouts believed he had, and he lost some speed along the way and he filled out his frame. However, I think he was hurt by the fact that he was mentally/physically built more like a bench player who needed days off.

That all being said, the guy played 509 big league games and he finished with a positive WAR number, so he was better than about 90% of guys who reach the majors and 99% of baseball players in general. There were just higher hopes for him. If he came through the minors as a player who looked like a potential bench player for his ceiling, his career would be remembered much differently.

This card was a really good one to get at the time it came out, especially with the autograph and it being tougher to find. I remember when Tabata was a rookie in 2010 and John Russell let him play the entire final game of the season with a .300 average on the line. His final at-bat pushed him to a .299 average for the season. I posted somewhere that he should have never taken that at-bat and a group of 4-5 people said that he needed the extra playing time and they saw no problem with it. One response even said that he will have plenty of .300 seasons in his future. That extra playing time was one inning on defense, seriously.

When the Pirates sat out Josh Bell in the final game of the 2016 season so he would remain eligible for the Rookie of the Year in 2017, I said I had no problem with that idea, but his defense was so bad at first base I would have started him that day and let him bat twice (maybe more if he walked) and he still would have been ROY eligible, just don’t get three at-bats, two at-bats were completely fine. I was met with people who said that an extra 4-5 innings didn’t matter. Seriously, those two things happened. Sitting out one inning on the last day is a dumb idea. Sitting out 4-5 innings on the last day is fine. Hashtag baseball fans.

I’ll end the front section by saying that the Pirates logo on this card makes every card better. 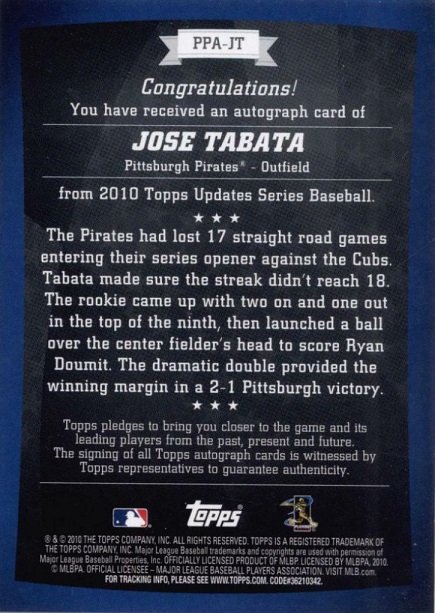 The back tells you that the fun fact on front really wasn’t that fun and more of a relief moment. The Pirates broke a 17-game losing streak on the road. That’s not really a great moment, but I’m sure it was fun for the few fans still invested in a team with a 25-50 record going into the day. I think there were better things to talk about with Tabata from the season, but he was a highly rated rookie and he autographed the card, so it didn’t need much help to sell people on the card idea.

I’ll keep this short because I went off on some tangents up top. Three sellers have this card on Ebay right now. They are asking (delivered price): $26.50 or best offer, $8 on a straight auction that will be done before you see this, and $8.50 or best offer.  I’d go with the last one if you want one, otherwise you’d just be throwing away $18 for nothing. There are no sold copies over the last three months, so this is far from a common card.