If you were a fan of the Pittsburgh Pirates in the 1930s, you knew outfielder Woody Jensen well. His entire nine-year big league career was spent with the Pirates. He debuted in 1931 and played his final game in 1939. During the 1936 season, he set a big league record for most at-bats in a season. It was a record he held for 33 years. The record for most at-bats in a season actually has an interesting line of progress.

In 1922, Hall of Famer Rabbit Maranville broke the record by one in his second season with the Pirates. He held the record until 1931 when Pirates Hall of Fame outfielder Lloyd Waner had 681 at-bats, nine more than Maranville. Five years later, Jensen batted 696 times (731 times if we are talking plate appearances) to set the new high. You have to go all the way to 1969 when Matty Alou, outfielder for the Pirates, had 698 at-bats to just barely surpass Jensen. So the all-time record for at-bats changed hands four times in 47 years and it was held by a Pirates player each time.

What’s more interesting is that Alou was surpassed by Dave Cash a year after he was traded by the Pirates. If you go the other way, early at-bat all-time leaders included Abner Dalrymple and Tom Brown, outfielders for the 1887 Pittsburgh Alleghenys. Brown held the record from 1892 until 1921. Even Paul Hines, who played for the 1890 Alleghenys, held the record for four years earlier in his career. It’s a big league record that has a lot of connections to the Pirates franchise over the years.

Anyway, back to Jensen, who was born 115 years ago today and lived until October of 2001. This is his first appearance in this series, though I tricked myself into thinking he was already here before. I have a picture of Jensen on the site to use for any time his name comes up and it’s a card I own. I thought it was there because I used the card for a previous Card of the Day article. So apologies to Jensen and his family and friends for ignoring him in this series, which has been going since March of 2020. His time has come, and I won’t wait 2 1/2 years to feature him here again. Today we look at a card put out during his record breaking season. It was produced by Goudey and it’s called the Wide Pen set. 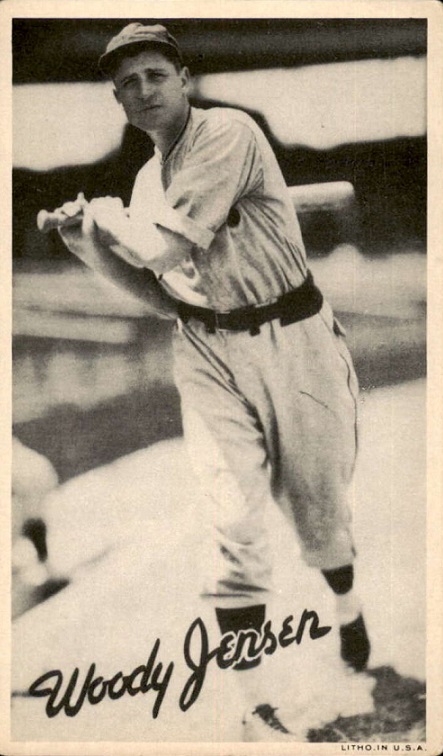 Despite a nine-year career in the majors, Jensen does not have many card options. This set has been featured here before for pitcher Bill Swift. It’s a set you will definitely see again because it has some great photos for players who don’t have many options for cards. The name Wide Pen comes from the writing on the card and wasn’t anything specific. It was a name given years after the set came out. The term “Wide Pen” refers to the thickness of the facsimile autograph you see on the card. There’s also a set called Fine Pen, which has thinner writing for the autograph. You can see one of those here in this amazing card of Jim Weaver and the Waner Brothers. The cards look similar, with black & white photos, facsimile autographs and a small white border, so the easiest way to tell them apart is the writing thickness. It helps to have examples for both, otherwise you don’t have a comparison to see the difference.

Jensen has two cards in the other set, one where he is throwing and one that’s him staring at the camera, showing him from the waist up. I have all three, bought them all at the same time, but this is my favorite of the three.

If you’re interested in getting a card of this long-time Pirates player, you’ll be happy to know that there are 12 on Ebay right now and they are not expensive. The most expensive is one that was autographed by Jensen, which is $65, with a best offer option. There’s one graded one, SGC 3, and that’s $42, with a best offer option as well. If you just want a no frills copy, they sell between $15 and $25.