It’s only been two months since our last look at the 1959 Topps set. However, that card came from a subset for rookies and looks much different than the regular 1959 Topps cards. I also wanted to use pitcher Bob Porterfield today, and the only option for him on the Pittsburgh Pirates is the 1959 Topps set. So this is a lot closer in time than I normally like to repeat a set, but I had my reasons.

Porterfield was born 99 years ago today, despite what today’s card claims. He played for the 1958-59 Pirates, though he had two different stints with the team. He joined them early in 1958, which led to today’s Card of the Day featured card. He started 1959 with the Pirates, but they let him go early in the season and then he joined the Chicago Cubs. A month later, the Cubs put him on waivers, and the Pirates picked him up to be a mop-up veteran pitcher over the rest of the season. He was let go at the end of the 1959 season, so he didn’t get a chance to be part of the historic 1960 club. Here’s a look at Bob Porterfield’s last Topps card, #181 in the 1959 set. 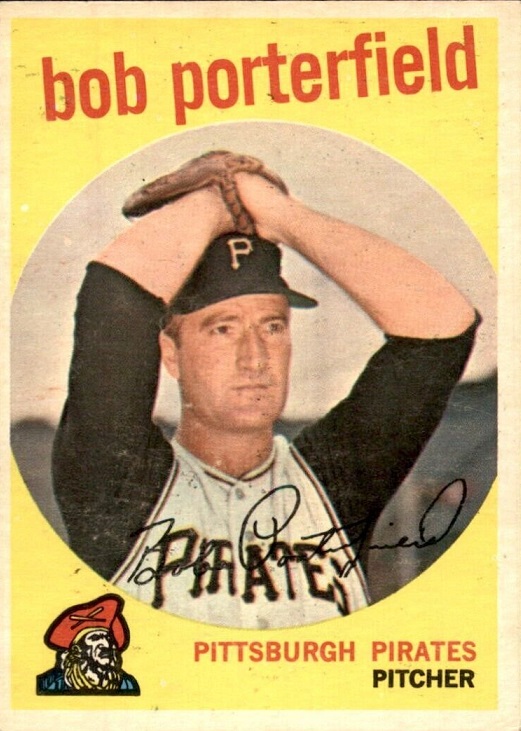 The front of this card looks like they themed it specifically for the Pirates, but not everyone on the team has the yellow border around the photo. A slight majority of them have yellow borders. Vern Law has an orange border. Dick Stuart, Dick Hall, Bob Skinner, Dick Groat and Gene Baker have green borders. Bill Virdon, Hank Foiles and Dick Schofield got saddled with a pink border. Smoky Burgess got a light green.

I’m a big fan of that old team logo and I give Topps credit for using it this year. By the time these cards came out, the Pirates had switched to the overly cartoonish logo that is only acceptable because it’s associated with the 1960 team. These cards have facsimile autographs, but the Porterfield photo wasn’t exactly the best one for the autograph showing up. You can barely see most of it because of his uniform and the placement. The circular photo frame here is a first for Topps. They used it again for cards with double photos (1963, 1983), but this circle design look is unique for the older cards. In 2008, Topps reissued cards under their Heritage name that used this design. In 2018, they used this design again for their Archives set. 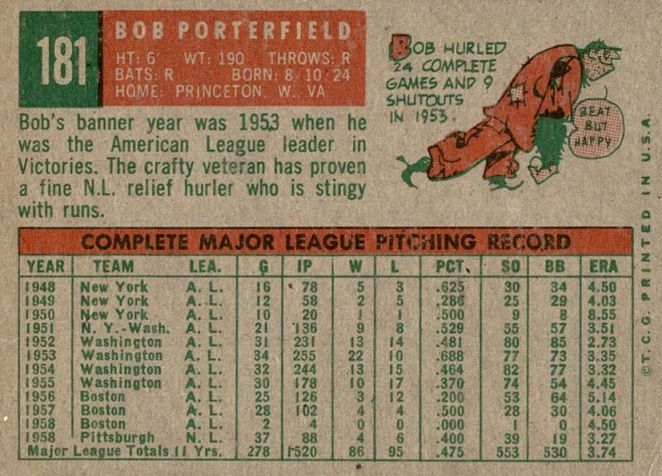 The back for this set is Christmas-themed, with the red and green coloring. At least that’s always my first thought. Notice that his birthday is off by a year (he was born in 1923). That may have been part of a common practice back then of saying you’re younger so you seem like a  better prospect. Unfortunately for Porterfield, with this being his last Topps card, there’s no card with his complete stats, but this is close. The cartoon of him is about as unflattering as you can get. He looks like a caveman wearing high heels. This is why Generic Gray Topps Man usually shows up on the old cards. His stand-in just doesn’t work.

If you’re interested in this card from 63 years ago, you’ll be happy to know that medium grade cards can be had for $3 delivered. The highest graded one is a PSA 8 and it’s going for $84 delivered. There’s a high grade (ungraded) copy for $50, with a best offer option. There are two authenticated autographed copies, one is $185 and the other is $154, and both have best offer options. Porterfield passed away in 1980, so his autographs are not plentiful. Those prices sound a bit high, but if you wanted an autographed card of him with the Pirates, you don’t have any other options right now.