Today is the 46th anniversary of John Candelaria’s no-hitter for the Pittsburgh Pirates. He was just 22 years old at the time of that game in 1976, and he was in his first full season in the majors. The next season saw him win 20 games for the only time in his career, and he also led the league with a 2.34 ERA. While he had a very strong 19-year career, that 1977 season was the only time he was an All-Star, got Cy Young votes and MVP votes. It was also his best year according to WAR, with a 7.4 mark. That performance led to him getting an extra card in the 1978 Topps set.

This set is one of my least favorite offerings from Topps, but there are some good cards in the set, such as the Eddie Murray rookie card, or the rookie catchers card that landed four All-Stars in Dale Murphy, Lance Parrish, Bo Diaz and Ernie Whitt. Whoever decided to put those four on the same card deserved a Topps Employee of the Month plaque. This set has a boring front design and some awful color choices, especially on the back, as you will see below. The cards with multiple players look a little better, such as card #207 in the set, which features the league leaders in ERA, Frank Tanana representing the American League and John Candelaria representing the National League. 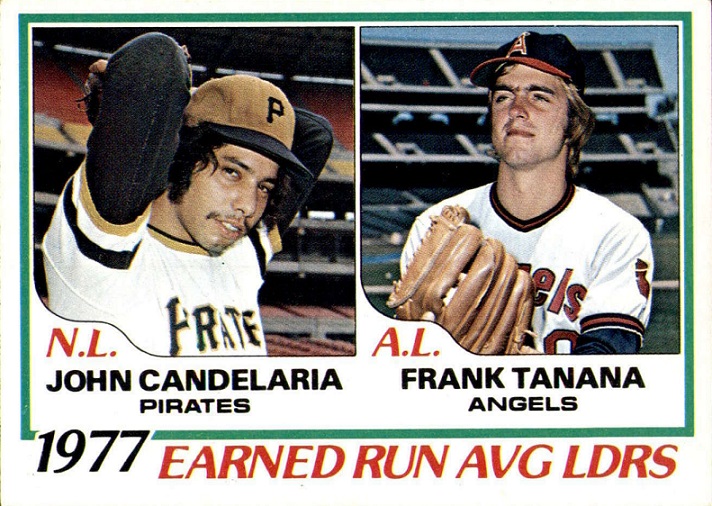 The first thing I noticed here is that both players are in staged action photo poses (in empty stadiums), but Candelaria is looking right at the camera. Most of these “action” photos have the players looking just off to the side of the camera like Tanana. The other thing I noticed on this card is that it’s a subset for league leaders, yet look at the spelling of leaders. Why not just write ERA? They did the same thing with RBIs, writing it out, then abbreviating the word leaders. No baseball fan would be confused by ERA or RBI, but they might by LDRS, especially if it happened now with all of modern stats out there.

One of the things I hate about this set is the color combo they use for the Pirates. The box around the photo (in green here) is red on the Pirates cards, and the letters at the bottom are purple, two colors you immediately think of when you think about the Pirates. I like the red and green combo here. It makes me think about Christmas and I’m a fan of the holiday. I’m not sure if red and green would have helped the Pirates, because the design is still boring and some of the photos are subpar, but it looks better here. 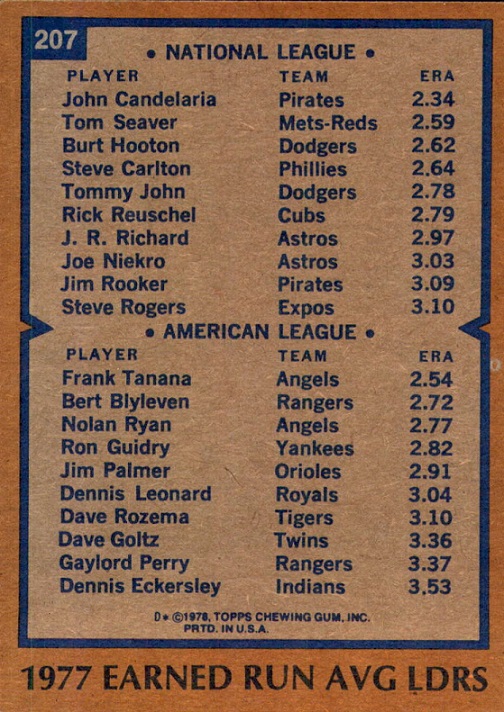 Notice that there are seven Hall of Famers among the league leaders this year, but Candelaria and Tanana beat them all. There’s also another Pirates player there in Jim Rooker, and by the time these cards came out, Bert Blyleven was with the Pirates, joining the team in a December 1977 trade. I also noticed that there’s quite a difference in ERA between the leagues among the leaders. You would expect the American League to be higher due to the DH, so there’s an easy explanation, even though five of the seven Hall of Famers were in that league.

If you are interested in this card, you’ll be happy to know that it is cheap. You can get these for $2 delivered from multiple seller and there are nearly 200 auctions for this card currently up on Ebay. Only seven have sold in the last three months, so there’s a good chance that some sellers have been sitting on them for quite some time, which is good to know if you’re on a budget and want to make an offer. Two of the sold ones are very interesting. One is a PSA 10 that went for $37. The other is signed by both players and it went for $19. As for active auctions, there are two graded copies with signatures by both players going for $43 and $42. You can get it ungraded for as little as $22.