Today is the 32nd anniversary of the Pittsburgh Pirates trade to get lefty pitcher Zane Smith, when they went all-in on winning their first National League East pennant in 11 years. They gave up a lot to get him with just two months left on his contract, but he pitched tremendously down the stretch and helped lead the Pirates to the playoffs. The Pirates ended up re-signing Smith as a free agent, so getting him in early proved to be helpful in keeping him around for longer than his contract.

This is the second appearance for Smith in our Card of the Day series. The last one came exactly a year ago today (not a coincidence) and it featured him on his 1993 Topps card. I want you to look at that link, even if you just check the front scan, because it’s relevant to today’s Card of the Day. Go ahead and check, then go to the next paragraph…

That photo of Smith shows him in a 1939 Pirates uniform, which was part of a throwback theme during that season. Now let’s look at card #94 from the 1993 Donruss set, featuring Zane Smith.

Here’s the front of the photo: 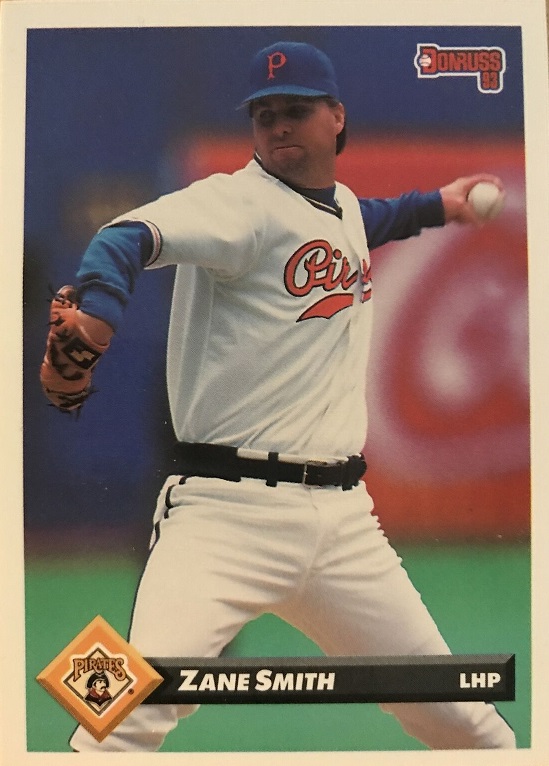 I assume that uniform looks extremely familiar, because apparently, Topps and Donruss were getting photos from the same day. Here’s the interesting part. Topps has other players in the 1939 uniforms, including a great action shot of Barry Bonds. At least on the front of cards, Donruss doesn’t have another photo from this day (I didn’t check the backs, but spoiler, the backs have photos). Smith stands out from the rest of the team set.

You can’t see it on this card due to the angle (you can see it on the 1993 Topps), but his left sleeve has a 1939 centennial patch, celebrating the 100th year of baseball, which was based on the Abner Doubleday/Cooperstown myth. The Pirates really need more throwback uniform days, going longer back than the mix-and-match era uniforms, though I really love when they use those all black jerseys with the pillbox cap.

The 1993 Donruss design is rather simple. I like the use of the team logo and putting inside what looks like an infield diamond or possibly a base (check the back for why this is likely). Then there’s a black bar with the name and position in white writing. The photos don’t have the usual black border between the photo and card border, which adds a bit of a different look. 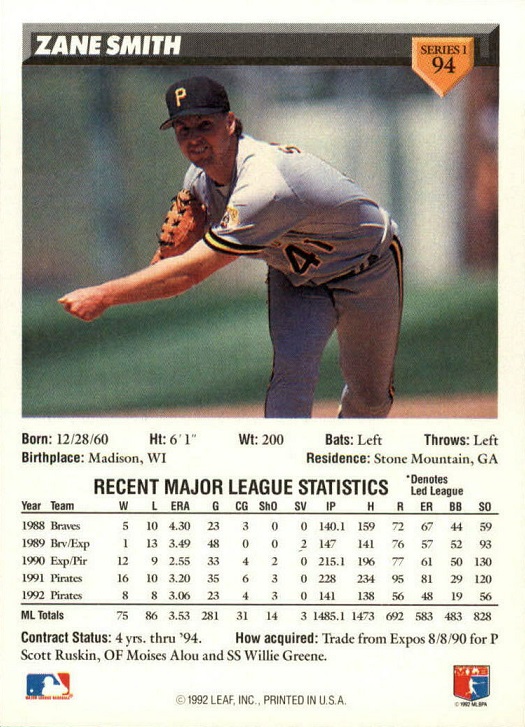 Donruss decided to add a large photo on the back which looks good. I would say that I don’t like the fact that the large photo eliminated some stats (notice it says Recent Major League Statistics), but Donruss always limited their available stats to recent years, so this large photo didn’t change their usual plan with stats. I like how they kept the front theme with the name/number at the top of the card. I also like that they used black and white for the stats and writing. Always makes it easier to read with the smaller print.

The bottom section tells you more about two things I mentioned at the top of the article. It shows you who the Pirates gave up to acquire him for two months in 1990. It also mentions that he was on a four-year deal that ran through 1994, which tells you that he signed a four-year free agent deal with the Pirates after the 1990 season.

If you’re interested in this card, you’ll be happy to know that it’s a common and all rules and regulations pertaining to common cards on Ebay apply here. You can get it delivered for about $2 from multiple sellers. There are also two autographed cards. One is $18 delivered. The other is $8, with a best offer option. Smith has a nice autograph, so you might be interested in that lower priced one. Just check scans of his known/authenticated autographs before purchasing. He’s not someone who gets forged, but it’s a good habit to get into if you want to collect autographs. Happy collecting.