On this date in 1958, the Pittsburgh Pirates signed a young player out of Earlsboro, Oklahoma named Wilver Dornel Stargell. He went to school in Alameda, California, where the 18-year-old was signed by the Pirates for $1,500. It turned out to be one of the best deals in team history.

Stargell has been featured in our Card of the Day series numerous times and I don’t expect his rate of appearances to let up at any time soon. Companies are still putting out cards of him in 2022, so we will never run out of options. I still have a ton of options to get to from his playing days, but today we are going to look at a post-career card.

Back in 1993, Nabisco put out a set called All-Star Autographs. You could get an autographed card for $5 (and two proofs of purchase) of one of six legends. The set became very popular because one of the players was Don Drysdale, who passed away during the offer, leaving Nabisco with limited autographs of him. That made the other five players with extra autographs to sign. One of those players in the set was Willie Stargell, who signed his share of cards that year and they are one of his cheaper autographs to purchase, as you will see in the pricing section. 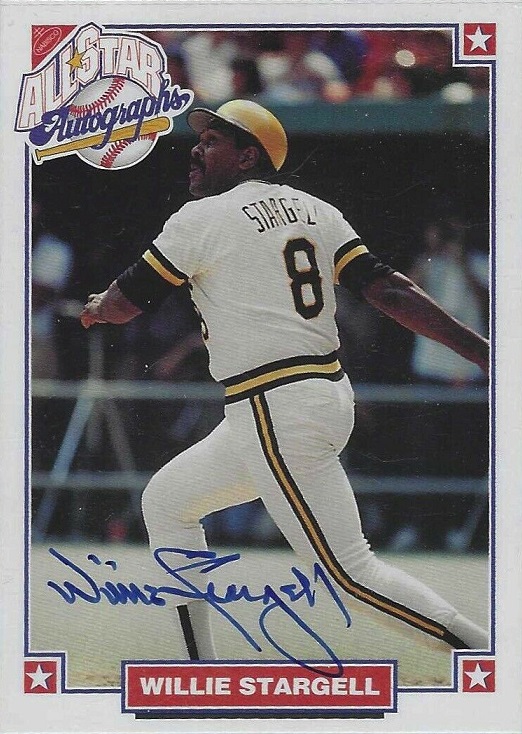 I never noticed it because the angle of his swing follow-through in this photo, but Nabisco didn’t have the rights to use MLB logos or names, so you won’t find the word Pirates on this card, or see the great team logo from that era. This photo angle eliminated the need to do airbrushing on the card, so it looks like nothing out of the ordinary. It’s a great action shot of Pops, who added a really nice looking autograph. You get a good look at that famous #8 on his jersey. The top left corner tells you that this is from their All-Star Autographs series, putting their logo right in the sight line of Stargell. 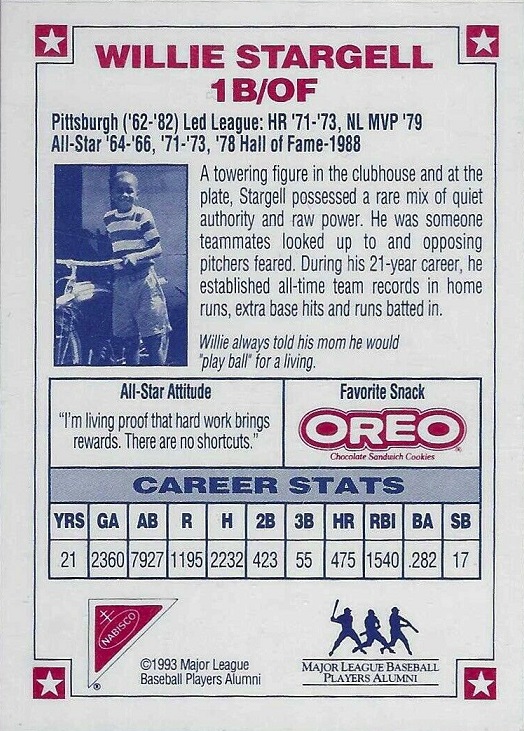 The back gives you some good information and a photo of Stargell as a young kid, as well as a quote about hard work. They also let you know that his favorite snack is Oreos. I assume that his choices were limited to Nabisco products. You can notice that they refer to the Pirates as “Pittsburgh” and they noted that he owned “team” records, but they couldn’t say Pirates on the card.

As mentioned, these cards were cheap and a lot of people took advantage of the offer, so these great cards are still plentiful. They came with a Certificate of Authenticity, but some people still get them graded. Right now there are 70 active auctions for this card and there are plenty that are going for around $20, but they will actually end cheaper if you wait for a straight auction. On the sold side, Ebay has had 46 sell in the last three months, and many of them have ended for around $10-$12. You won’t be able to get a graded one that cheap, but you can make sure you buy one with the original COA. I’ll also note that not all of the cards are signed in that dark blue. The players didn’t sign all of the cards at the same time, so at one point Stargell switched to a dark gray looking autograph. There weren’t any cards issued without autographs, so you can assume all of them are legit.