Today’s Card of the Day comes from the 1983 Fleer set, which hasn’t been featured here in 11 months. Today’s player is Steve Nicosia, who is somewhere celebrating his 67th birthday, unaware that we are about to take a look at his 1983 Fleer card. This is his second appearance in the Card of the Day series, showing up here last year on a 1982 Fleer card that has a rather unique pose. I picked his first card based strictly on the pose, but today’s choice comes way of the old standby decision making option of just going for the set that hasn’t been featured here in the longest time (he has no cards from sets we haven’t used yet at least once). So here’s card #314 from the 1983 Fleer set. 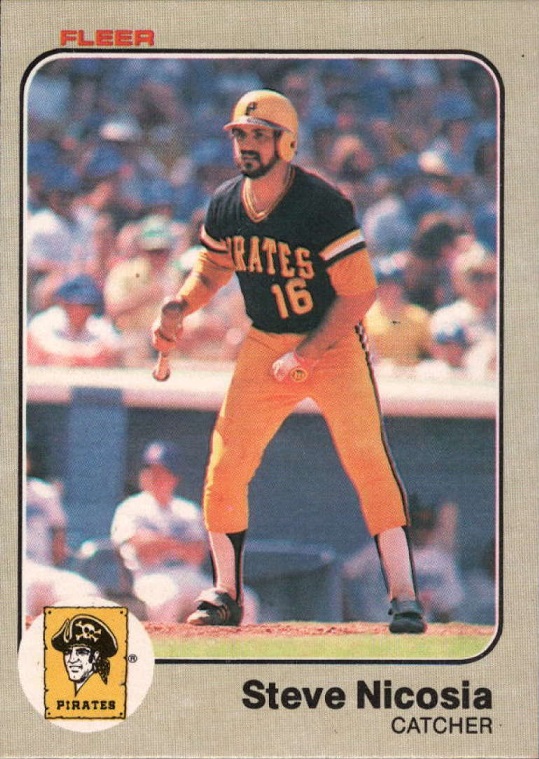 The 1982 Fleer Nicosia was an interesting staged photo/pose. This one is an action shot and I’m not 100% sure what is going on here other than the fact that he appears to be batting against the Los Angeles Dodgers. I’m not exactly sure what he is doing with the bat, and I don’t know if I want to know what he’s doing with his other hand. You have to love the old uniforms and the batting helmets here. I used to have that batting helmet as a very young kid (minus the ear flap), though I’m not sure exactly how I got it, since they weren’t using those colors by that time, and I didn’t live near Pittsburgh.

I was trying to look up what people called this border color. It’s grayish, but mixed with a very light brown maybe, or just a light gray. Anyway, no one put a color name on it, but there were certainly varying opinions of this set. I saw one person who really liked it, another who said it didn’t work with certain teams, and another who called in drab and boring, and their least favorite set design of the era. I’m somewhere in the middle, where it definitely stands out from the rest of the early 1980s because of the border color, but the color certainly isn’t the best choice. As you already know, I give extra points for the use of the team logo, especially that one (though they wouldn’t have chosen any other one that year, but that’s besides the point). 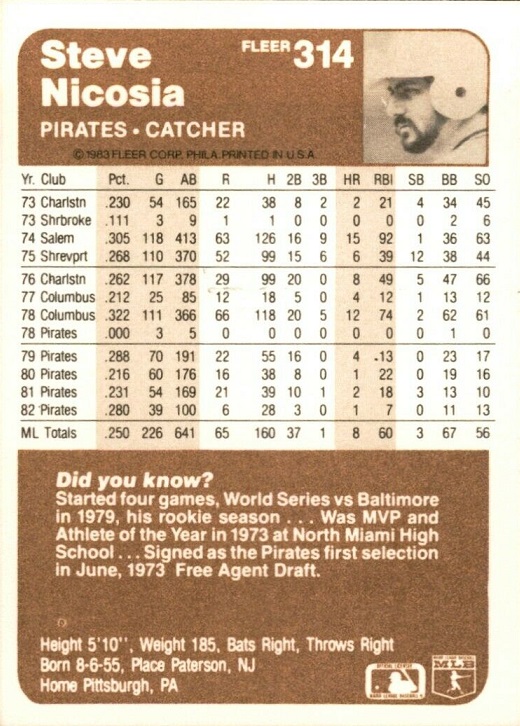 The back here gets extra points for including all of his career stats, and this year was the stat of Fleer using vertical stripes in the stats section. I’m not exactly sure why, but it was something that they liked to do each year for quite some time. This is also the first time that they used a second photo on the back, which was something they stopped in 1986. In their first set in 1981 they put the batting average/ERA in a small circle in the upper right. The next year they put the team logo, which I really like more than a small black & white photo. I’m not a fan of using a different boring color on the back, but I do like the “Did you know?” section. I did not know that middle fact. Thank you for sharing, Fleer.

This card is obviously a common and all rules and regulations concerning common card pricing apply here. In other words, you can get it for $2 delivered, just watch for the sellers with high shipping charges. There are some autographed cards if that interests you. One person has three autographed copies and they want $20 each. Before you run to your nearest Ebay to get those, wait to hear the other prices. They are going for $3.70 and $2.98…cheaper than some unsigned cards. Those are great deals, though just check to make sure the autographs are legit. A price that low is probably good because no one is risking their name/reputation for $3, but checking signatures before purchasing is a good habit to get into for future reference.