Today’s Card of the Day article is two cards in one, though it’s just a variation of the same card from the 1981 Fleer set. For a marginal player with minimal time in two stints with the Pittsburgh Pirates, Bevacqua has been here a lot. I featured his 1982 Topps card early in this feature’s existence because it’s one of my favorite looking common cards from that era. His other appearances was a year ago today and it was the 1974 Topps Traded card. His inclusion in this series on August 5th again comes from the fact that he was acquired by the Pirates 42 years ago today in a trade, making his Traded card an excellent choice that day, even though it was from a different trade. The other three people in that 1980 deal did not have any cards with the Pirates, so Bevacqua takes center stage again with this look at his 1981 Fleer card.

The 1981 set was the first large set for Fleer, and they joined Donruss in breaking Topps stranglehold on the baseball card market that season. The set has the appearance of being rushed out, because they made a lot of errors. Bevacqua was one of those players who had an error and corrected card, which made the error worth more money. If an error card isn’t corrected, then the error doesn’t add any value due to the large print run. With a corrected version, the print run of both cards is smaller than any regular card with no error. Neither card here is hard to find, but there is extra value added anyway. Here’s a look at card #382 from the 1981 Fleer set.

Here are the fronts of both cards side-by-side: 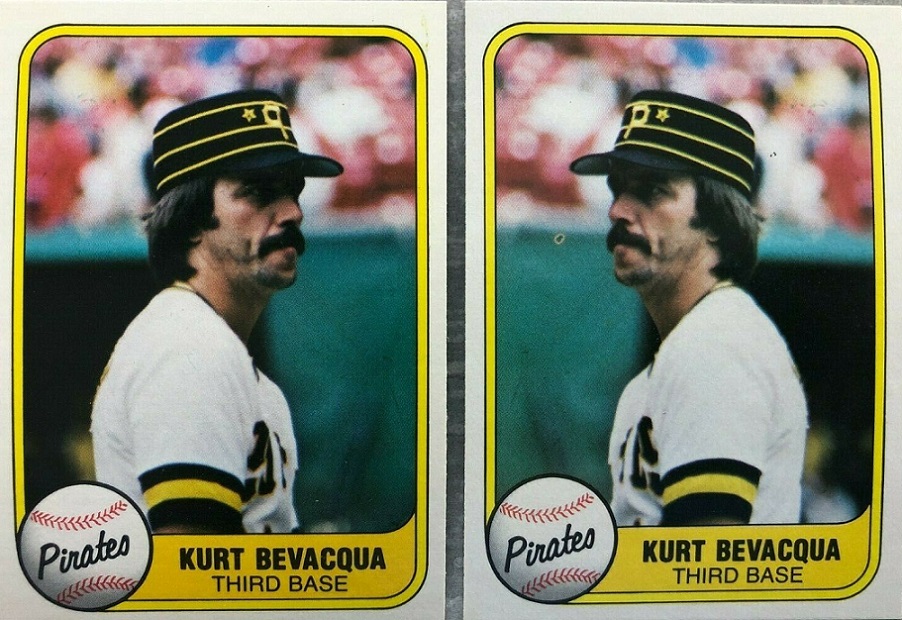 A few people on Ebay are selling both cards in the same lot, so I was able to get both cards side-by-side in one scan. I doubt anyone needs help figuring out the error here, but just in case, the one on the left is a reverse negative photo. You can sort of see Pirates written backwards on the front, but the pillbox cap really gives it away better. This scan reminds me of the Spider-Man meme where he’s pointing at himself and vice versa.

All of the cards in the 1981 Fleer set had the gold color for the section where the player’s name and position are listed. However, the border around the photo was matched up to the specific team colors. The team name color inside the baseball could also be different. The Pirates got their team colors in those two sections, adding to the look of this set. Fleer didn’t get the greatest photo quality for a lot of the players, but they got better in that area as they went along. 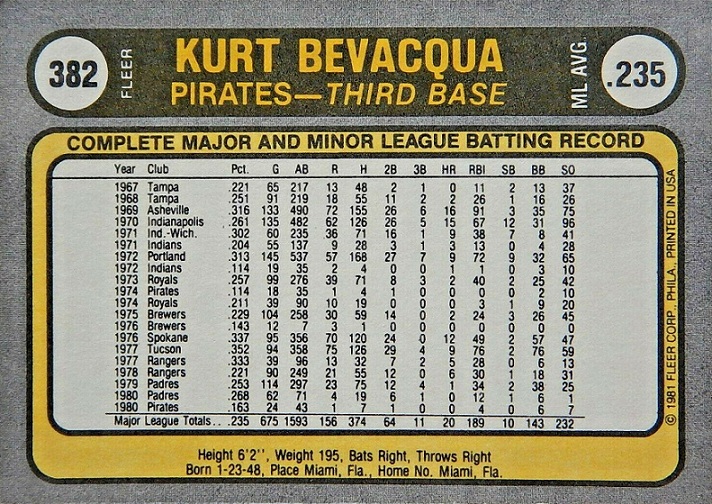 I included one back scan here because both are the same. While it led to some small print for the numbers, I like the fact that they included all of his pro stats. The back colors are the same on all of the cards, so it’s just a coincidence that it looks like it was catered specifically to the Pirates. I always thought it was odd that Fleer included the career batting average twice on the card, but they also had different names for it, calling it a ML AVG in one spot and PCT in another.

The pricing on these cards can be looked at three ways. If you just want the corrected card, you can get it for $2-$3 delivered. The cheapest error version is actually only $1.50 from one seller, but most are slightly over $3 delivered. Here’s the funny part. If you want both in one auction, the cheapest is $7 delivered, so it’s better to buy them separately, because after that $7 auction, there are a few more around $10 for both. If you want a fourth way, both cards have one auction for an autographed copy. One is $11 and the other is $9 delivered.