I put that asterisk there because the Tip Top set also includes a picture of Forbes Field and another one is the Tip Top Bread’s mascot (referred to as Tip Top Boy). It also includes Pirates owner Barney Dreyfuss and team secretary William Locke. The team secretary back in 1909 was a hugely important job in the day-to-day running of the team, right there with the team president and the manager, who was basically the GM as well, engineering trades. They had some other interesting choices for the set, especially because it was celebrating the World Series champs. The set has Lefty Webb, John Flynn, Vin Campbell and Kirby White, who were all new to the 1910 team, yet they get the same “World’s Champions” tags as everyone else. Tip Top missed out on including Bill McKechnie, which would have given them another Hall of Famer to go along with Dreyfuss, Honus Wagner and Fred Clarke.

One of the more obscure players in the set is Paddy O’Connor, who was born on this date in 1879 in Kerry, Ireland. He’s making his first appearance in our Card of the Day series. He won’t be a regular here because he only has two other cards with the Pirates, but it’s amazing that he got three cards in the first place. O’Connor was with the Pirates for a long time, but he was one of two backups to George Gibson, who played nearly every day. O’Connor played a total of 27 games for the 1908-1910 Pirates, and just two of those games were starts. That’s right, he started two games in three years. That was enough to get him in three important baseball card sets from the early 20th century. Today we look at one of those with his 1910 Tip Top card. 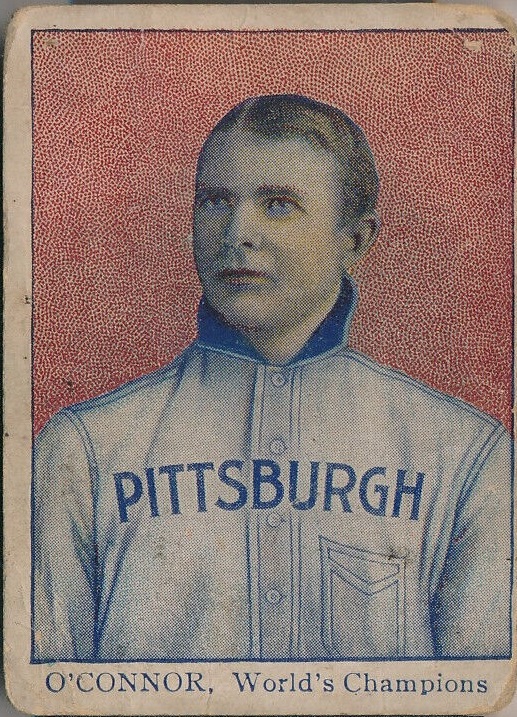 The first thing I notice here is the jersey. Old cards had a habit of putting city names on cards where there was no name (or anything else in most cases). The Pirates jerseys from that era had no writing across the front. These photos/drawings used the 1909 uniforms. In 1910, the middle section with the buttons was a dark blue straight down. The 1909 uniforms looked just like this one (without Pittsburgh) and it had the iconic PBC patch on the sleeve. With the way all of the players were picture here (basically what you see above), the patch is always out of view.

The second thing I noticed is really 1-B, and that’s the spelling of Pittsburgh. They added the H at the end, which wasn’t there during the 1890-1911 time-frame. Some people never embraced the change, so I’d say both spelling ways were acceptable, but if you look at old cards from this time, most don’t have the H at the end.

As I said, all of the cards here basically look the same as far as pose and the solid color one-color background, though a few cards like Wagner had a hint of another color around them that fades into the main color. If you look really close though, you see that it’s not a solid color and it’s a dot pattern, which is easier to see with this bigger scan. These cards are 1-13/16” by 2-3/8” in size, which is bigger than the average tobacco card, but more square that the average card you find today. 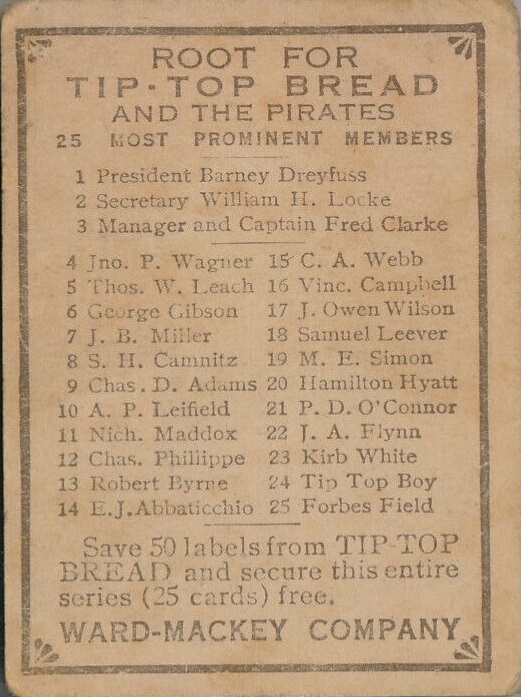 As you can see, the back is an ad/checklist/giveaway offer. If you get a time machine, go back and save those 50 labels so you can get the entire set. This set is worth a fortune in high grade (more below in the pricing section). You also see why I wrote out the part about the asterisk the way I did at the top. They say it’s 25 prominent members of the Pirates and then include the stadium and their own mascot. There are some great names on that list of players, minus the nicknames like Lefty, Babe, Dots, etc. The O’Connor listing is interesting because it says “P.D.” for his name, but his real name is Patrick Francis. Part of me wonders if the person heard “Paddy” as “Pat D”.

Another interesting thing is calling the team “Pirates”. Team nicknames back then were just that, nicknames. There was nothing official about the Pirates. Those PBC patches stood for the team name, Pittsburgh Baseball Club. So you didn’t often see the team referred to as the Pirates on cards back then.

If you’re interested in one of these cards, be prepared to pay much more than the common card we usually see here. This particular scan (the front only, as I needed to pull a different back scan) shows the lowest priced card from this set on Ebay. It’s the only O’Connor and they want $307 delivered, plus tax. Out of the 24 cards on Ebay from this set right now, 14 of them are over $1,000, and the lone Honus Wagner is $20,000, and it doesn’t even have a number grade due to damage. The thing is that this set has gone up a lot recently, but card prices on the vintage side have been very strong lately.