We haven’t featured the 1998 Topps set here since last June when we looked at the Prospects card of Aramis Ramirez. I didn’t plan to feature it here today in our first look at Kevin Elster, who is celebrating his 58th birthday today. I tried two other sets first before settling on the 1998 Topps set because I couldn’t get nice enough scans of the other cards. Too many blurry scans and watermarks from sellers on Ebay. That’s okay though because the photo on the 1998 Topps card of Elster is one of the better ones in the set. Also, the Prospects cards in the set are quite a bit different from the regular one-player cards, so card #198 from the 1998 Topps set is a perfectly fine substitute. So without further blah blah from me, let’s look at that card 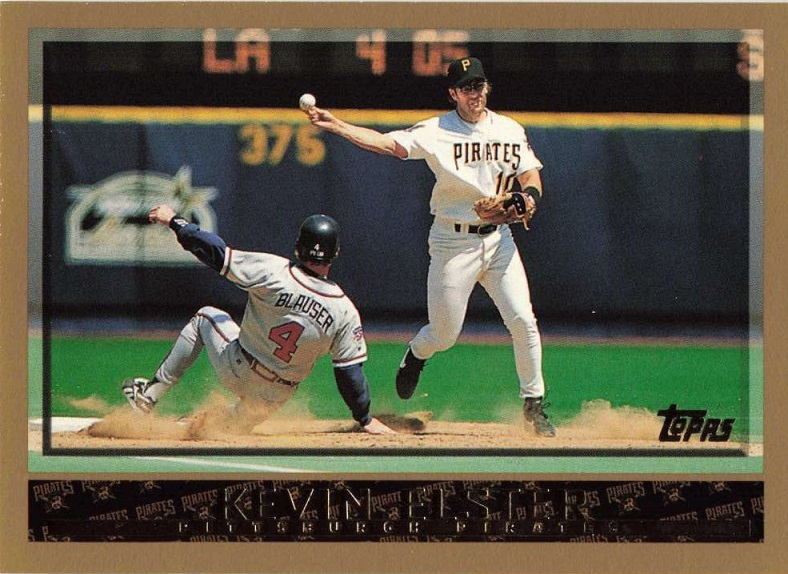 Elster only put in 39 games with the Pirates due to injury, which makes it fairly easy to identify this play pictured here. That’s Jeff Blauser from the Atlanta Braves, and the Pirates are at home. Clearly we see this is a play at second base (looks like the old “neighborhood play” too before shortstops actually had to touch second base). Right away we are down to four games from May 9th to May 12th. Thanks to the magic of Baseball-Reference, we can figure out that this play.

There are two plays where Blauser was forced out at second base, but one thing gives it away. The first one was in the eighth inning of a game that started just after 7 PM. The other was the fifth inning of an afternoon game. Clearly this is an afternoon game. So this play was an RBI ground out by Ryan Klesko that broke a 2-2 tie on May 11th.

The 1998 Topps set has an interesting look. I like part of it, but clearly the writing at the bottom is difficult to read. Why make the writing the same color as the background? The thing they did with the photo (not sure what to call that effect) is definitely different. I don’t hate or love it, but I appreciate the attempt at something different and the fact that it wasn’t a fail. I also can’t hate having about 30 Pirates logos on the front, even if they are a bit difficult to see. This particular card is a win though because that’s a great action shot. 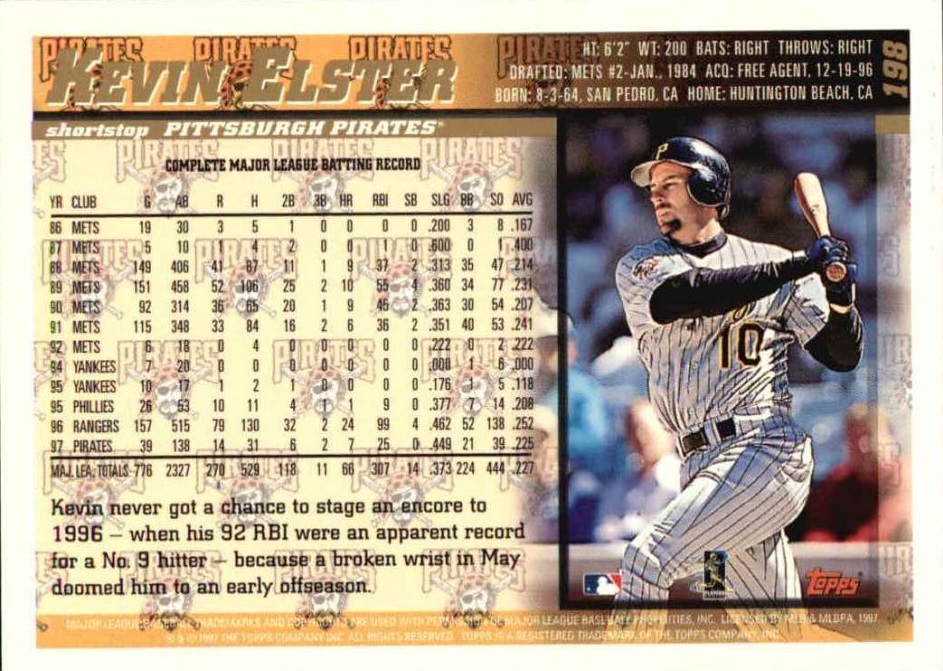 The back adds a second photo of Elster, which is completely different from the front. That unfortunately doesn’t always happen on these older cards. You got him fielding at home in the first one and batting on the road in the second one. They really went overboard with the team logos on these cards. It’s like they knew I would write about how much I like when cards include the logos so they put on as many as possible. Overall, the back isn’t bad looking either. Full stats, a little bio, extra photo, so many team logos. Solid job, Topps.

If you’re interested in this card, there are more choices than just the basic common card, which can be had from multiple sellers for $2-$3 delivered. They put out Inaugural cards for both the Tampa Bay Devil Rays and the Arizona Diamondbacks, with special logos for each card, which strangely enough, weren’t limited to players for those teams. You can get either team for about $5 delivered. Then there’s the Chrome version and Chrome Refractor, which are $3-$4 delivered. Nothing too expensive, but you have options.