Today’s Card of the Day is an oddity from the 1985 O-Pee-Chee set, the Canadian cousin of Topps. The Pittsburgh Pirates acquired outfielder George Hendrick from the St Louis Cardinals after the 1985 Topps set already went to print, so it was too late to change his card to show him on the Pirates. Instead of doing that, Topps just put out a new card of Hendrick in the 1985 Topps Traded set that showed him in a Pirates uniform. The funny part about that card is that by the time people were getting his card showing him on the Pirates, he had already been traded to the California Angels in a six-player deal that happened 37 years ago today.

I have heard from many people who saw Hendrick on the Pirates and didn’t appreciate the way he played. He got the nickname Joggin’ George during his career and that’s how many Pirates fans remember him. He had a nice career in the majors, but his brief time in Pittsburgh is not remembered fondly. However, today is the anniversary of the date that the Pirates traded him away, so if you can’t celebrate the man, celebrate the moment.

Today’s card is from the 1985 O-Pee-Chee set, and they took a much different route when deciding how to let people know that he switched teams. I’m not even going to try to describe it until you’ve seen it for yourself, so here’s a look at card #60 from that set, featuring George Hendrick. 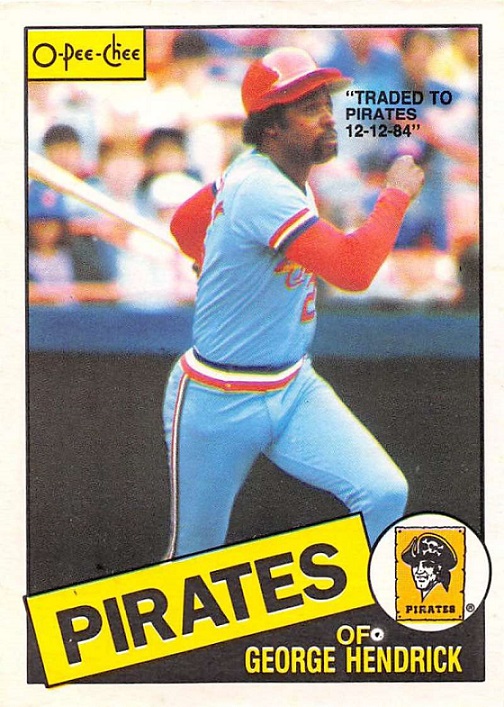 That is a picture of Hendrick in a St Louis Cardinals uniform with the 1985 Topps front design for the Pittsburgh Pirates cards. The best part is that they wrote on the picture section of the card “TRADED TO PIRATES 12-12-84”. I guess they needed a good way to explain why someone on the Cardinals was shown on the Pirates, sort of. The photo quality looks a little off here, but that’s the same pose that Topps used that year and the quality wasn’t the best for them either. The helmet looks like it’s missing a Cardinals logo on purpose, but the Topps card is the same.

Apart from the oddity of this card, I have to mention how much I like the front design here. As you might imagine, the Topps card of Hendrick does not have the same card design. They completely embrace the Pirates colors for the team name and his position/name, going with reverse colors of each other in the two sections (that mark after “OF” is just a printer defect). Also, they included that great logo from that era, which always adds bonus points. I’m really in the middle as far as the overall look of the 1985 Topps/O-Pee-Chee cards, but I like the Pirates cards a lot more than the set itself. 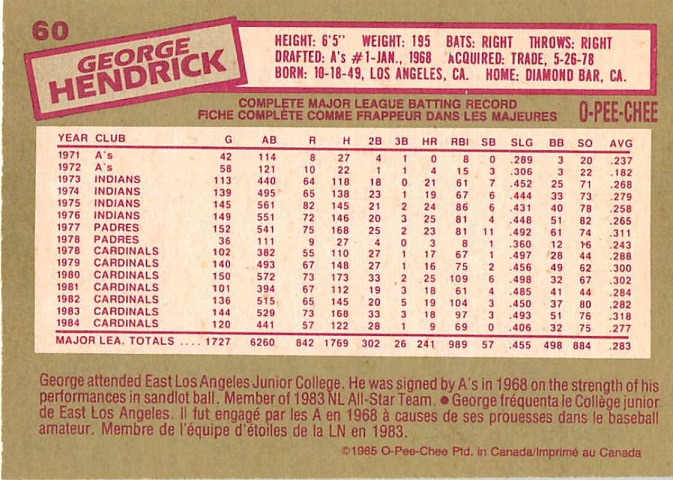 I like how they took the time to update the front to show him on the Pirates, both with the design and the added words. However, the back here didn’t get the memo. Check the “acquired” part at the top. That’s telling you how the Cardinals got him, not how the Pirates got him. So they didn’t update that section

These stats are awful to try to read due to size, so just imagine what the regular Topps cards look like from that year, with a darker (gray) background color. Check those career stats though. You can see why the Pirates wanted him, and he really did have a solid big league career. As you may have noticed, there’s English and French writing in the bottom section. That’s one of the easier indicators of this set being from O-Pee-Chee, though the front had a fairly decent size logo in the top left. The other quick indicator would be the difference in the back colors. Oh yeah, it also says O-Pee-Chee at the bottom. For as much as the two sets are alike, there are also a lot of differences (especially on this particular card).

If you’re interested in this oddity, you’ll be happy to know that it’s one of those cards that you can find for $2 delivered from multiple sellers. There are no special auctions, so you just basically have to watch the shipping charges if you plan to get one.