Today’s Card of the Day features catcher Milt May, who started his big league career with the 1970-73 Pittsburgh Pirates, then finished his career with the 1983-84 Pirates. He played for four other teams in between that time, but today we focus on his last card from his first stint with the Pirates before they swapped him even up to the Houston Astros for pitcher Jerry Reuss.

May has been featured here three times already, so we are running out of cards for him. The high number for a common player comes from a special two-part article I did, where I looked at his 1984 Topps card, followed by his 1985 Topps card the next day. The reason for that, which I’ve never done with anyone else, was that the photos on those two cards couldn’t be anymore different. The 1984 card has one of the oddest closeup photos you’ll ever see. The 1985 card, in my opinion, has one of the best action shots you’ll see.

May’s earlier cards are posed action shots. I almost picked his 1972 Topps card, where May looks similar to the 1973 card, but the backgrounds on the two cards are different. Obviously the looks of those two sets are very different as well. The 1972 set is colorful, while the 1973 set is much more subdued. Here’s a look at card #529 from the 1973 Topps set featuring Milt May. 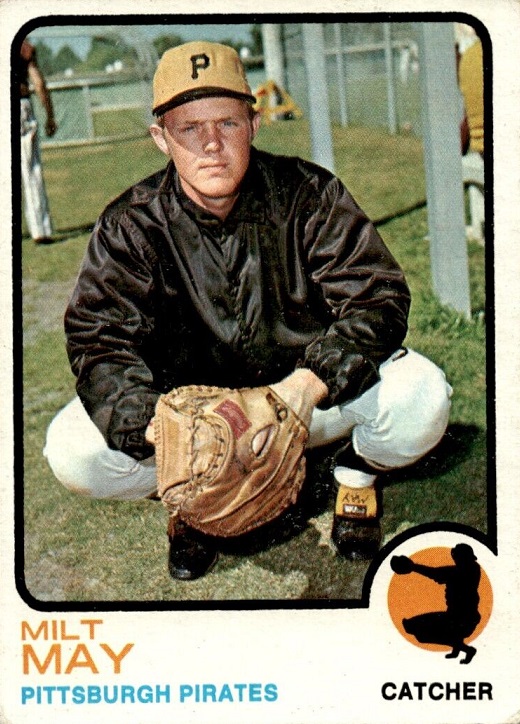 Topps sometimes took posed action shots of catchers, many times looking like they were tracking a pop up behind the plate. The 1973 set was the first time that they included actual game action shots for the regular card of players (1972 had an In Action subset and the playoff cards had game photos). May got neither of those things here. He just looks like he’s in Spring Training waiting his turn to catch a bullpen.

I noticed on his 1972 card that you can read “May” on his glove, so I looked for it on this card and there it is on his spikes, upside down so he can see it the right way. Who knew players had different equipment for each month? And why is he wearing May’s equipment in an obvious Spring Training photo? We May never know the answer to those questions.

For those who don’t know, the 1973 set had different shadow pictures in the bottom corner for each position, so all of the catchers had that shadow picture. For pitchers, they would differentiate between lefty and righty pitchers. They also had different color writing for the team/name at the bottom for each team. So all of the Pirates had orange names and blue team names. What wasn’t the same for each team is the background of the shadow photo. May throws you off here because his catcher background is the same color as his name, but other Pirates have blue, green, pink, red and yellow. 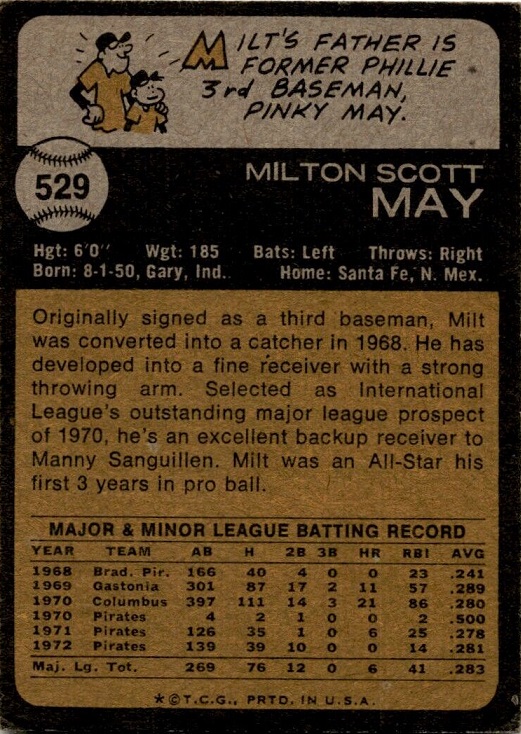 One thing about the 1973 set is that the back is just as subdued as the front. It was like they were really trying to shy away from the look of the 1972 set as much as they could. I like that they not only included a nice bio for May, they also had his entire pro career on the back in the stats. Generic Gray Topps Man shows up in the cartoon here with his son! He portrays Milt’s father Pinky May, who was a starting third baseman for the Philadelphia Phillies for five years before serving in the war, which ended his big league career. That’s a tough way to have your big league career end, especially since he had a strong season in 1943 and the competition was really watered down over the next two seasons, so he would have likely been a strong player those years.

May’s card isn’t exactly a common card, even though he’s considered to be a common player. That’s because Topps used to split cards up into series, so the first packs you were getting only included the low numbered cards in the set. May is the first card in the final series, which were printed in lower numbers. That not only makes it more difficult to find than someone with a lower number, it also makes it more popular now. There are actually more sold auctions for this card (42) in the last three months on Ebay, than there are active auctions (40).  If you want to pay under $10 delivered for this card, it’s going to have some corner dings and some wear. It’s not a $100+ card unless it’s grade 9 or 10, but if you want a PSA 8, you’ll pay $30+. Best bet is to wait for a straight auction for an ungraded copy and you can probably get it cheaper. Or if you’re not hung up on the grades, you have plenty of options $10 or less.