Today’s Card of the Day helps celebrate a memorable game from the three-year National League pennant run of the 1990-92 Pittsburgh Pirates. It was 30 years ago today that Tim Wakefield made his big league debut against the St Louis Cardinals and gained a lot of fans quickly. He tossed a complete game, winning 3-2 with no earned run and ten strikeouts. He went on to post an 8-1 record that season for the Pirates, followed by throwing complete game victories in both of his playoff starts.

Wakefield’s time in Pittsburgh was too brief. He struggled in the majors in 1993, then he was no better in the minors in 1994. While he was only dominant in spurts, he was a reliable pitcher, who turned a regular rotation spot on a good team into 200 career victories, with 186 coming after he left the Pirates. He would have never won 200 games in Pittsburgh because they didn’t have a single winning season during his 17 years in Boston, but he would have ended up fairly high up the Pirates all-time list of wins if he stayed around all of those years (ignoring what would have happened during free agency obviously).

Today we take our second look at Tim Wakefield in our Card of the Day series. I already used up my favorite card of him, his 1993 Fleer Ultra card (feel free to share your favorite Wakefield card in the comments). He doesn’t have a ton of Pittsburgh card options, but there’s enough to warrant a perusing of Ebay to pick one out. I went with the 1993 Topps Stadium Club card because the look stood out among the other cards. Here’s a look at card #13 from that set, featuring the knuckleballer, Tim Wakefield. 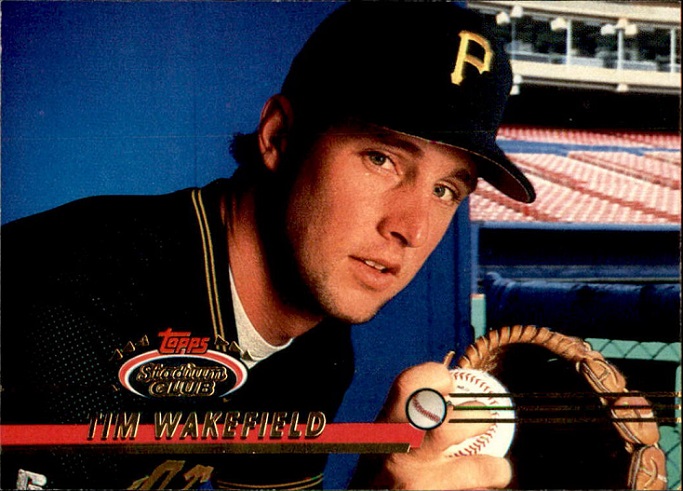 Topps Stadium Club cards were the upper level cards put out by Topps to compete with Upper Deck. I don’t think that 1989 Upper Deck set really gets enough praise. They made every other company step up their game. Score started the improvements in 1988, but they didn’t change the game. Topps, Donruss and Fleer all put out mediocre sets in 1989. Upper Deck forced everyone else to be better during a time when baseball cards were are their most popular already.

The Stadium Club card sare higher quality than the regular Topps cards, and you paid extra for them too. They were glossy cards front and back, with better quality photos. They went with the borderless look here, with the only information about the player being their name. No position or team name, no team logo either. I like that Stadium Club logo and the way that they used the logo colors for the rest of the front design. They got up close and personal with Wakefield in the dugout of what looks like an empty stadium, as he shows off the knuckleball grip, which is partially obstructed by the front design. 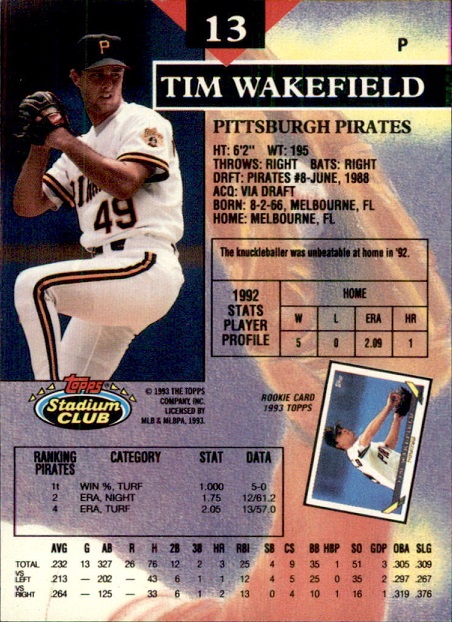 I like that the back here adds a second photo and that it’s much different from the front photo. The stats here are not the traditional ones that you find on the back of cards from that time. They looked at his home stats in one area, where he was unbeatable, to quote them. Then they looked at his stats in certain situations (his record on astroturf and his ERA at night), then at the bottom they showed his splits versus right-handed and left-handed hitters. One of the things that Stadium Club did was include a photo of the player’s rookie card. In this instance, it’s just his regular Topps card from the same year. One surprise here is that they didn’t even put the team logo on the back. You can see it on his jersey, but that’s not the same as the company putting it on the card.

If you’re interested in this card, there are multiple sellers who have it for under $2 delivered, so just sort by lowest price and find a reliable seller. There are a few options at higher prices, such as a 5×7 Master Photo, a Members Only, or a rare First Day Issue card. Those will cost a little more, though the first two options can be found under $5 right now. Four of these cards have sold in the last three months on Ebay.