It has been almost 14 full months since our first look at the 2014 Topps Heritage set. That article was Charlie Morton, posted on the 12th anniversary of the day the Pittsburgh Pirates acquired him from the Atlanta Braves. The 2014 Topps Heritage set uses a throwback design, which was borrowed from the 1965 Topps set, though they put an interesting twist on it that I very much appreciate. Today’s player of the day is Clint Hurdle, the manager of the 2011-19 Pirates, who turns 65 years old today. This is his second appearance in our Card of the Day series, though there’s an interesting twist here. His first appearance came on his 1978 Topps rookie card, which also features Pirates outfielder Miguel Dilone, who was the main subject of the article. Today, Hurdle is the main subject, as we look at his 2014 Topps Heritage card. 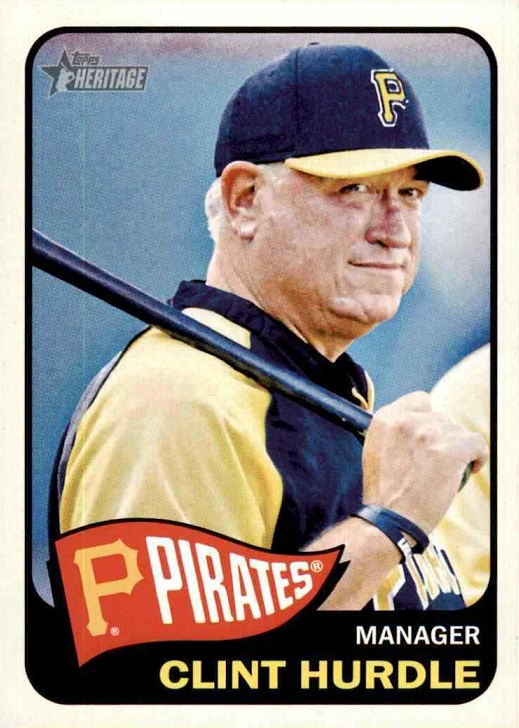 On of the reasons that I’m not a huge fan of the 1965 Topps set is because Topps used different colors for each team in the bottom border around the photo, and they decided to use pink for the Pirates. It looks awful to say the least. I don’t hate the set as a whole, but the Pirates cards do knock down some of the overall value. This 2014 set makes up for that being using black around the photo, along with yellow letters for the name, which go so well with the Pirates uniforms, as Hurdle demonstrates here.

I like the pennant usage for the team name, and Topps did something very interesting with the original. The Pirates had that overly cartoonish Pirates logo during the 1965 season, the one that you see with any 1960 World Series items. I am not a fan of that logo. However, Topps decided to use the previous logo, last used seven years earlier, on their 1965 cards. That one was a great logo. I can give them a nice hat tip for that one. It’s unfortunate the they didn’t think to do the same thing in 2014, because the current logo puts me to sleep. That’s the best we can come up with now? 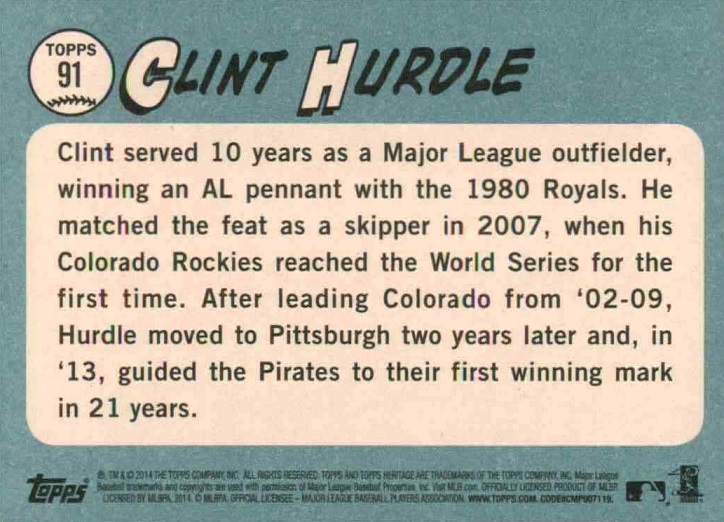 Topps decided to keep the look of the back exactly the same 49 years later. I have no idea why the Topps Heritage sets each year line up with sets from 49 years earlier instead of 50, but I’m glad that the kept the idea going. It would have been nice if there were some type of stats here, maybe a line of career stats as a player and another as a manager. They got the most important part though, noting that he led the Pirates to their first winning season in 21 years.

Speaking of 21, there are 21 active auctions for this card on Ebay at the time of this write-up. There are a few of note, along with the standard line that you can find this card for $2 delivered from multiple sellers. There’s one auction for a card graded 9.5 by a grading company that I’ve never heard of and the price is $80.

As a general rule of thumb, I’d say don’t pay any extra for a graded card from a company you don’t know. It’s okay to buy the card (check scans first of course), but just because it’s graded, doesn’t mean that the value increases. The top companies will get the top dollars in graded cards. For example, if the PSA 9 version of this card was worth $20, then that doesn’t mean that the same card from another company in the same grade is also worth $20. The company is as important as the grade. Just a helpful tip about cards.

As for other auctions of note, there are three autographed copies. Two are going for about $12 each, while one is $6. The cheaper one is actually the nicer looking example. As I always say, check it against known signatures first before buying. Most players/managers aren’t getting forged for a few bucks extra, but it’s also pays to be sure about it being real.