Today is the anniversary of the 2000 trade that brought Jack Wilson to the Pittsburgh Pirates, and also the 2009 trade that sent him to the Seattle Mariners, ending him time in Pittsburgh exactly nine years after he arrived. I was going to post about Wilson today for obvious reasons, but I realized that he’s already been here twice and I’m sure he will be here plenty of times in the future. I decided instead to go where it all started for the Pirates with Wilson. He came over in a trade for reliever Jason Christiansen, which obviously worked out great for the Pirates. So instead of looking at Wilson for the third time (here’s the first and second), we take a look at Jason Christiansen for the first time.

I’m not taking a major stand here when I say that current baseball autographs are absolute garbage. Everyone short-hands their autograph on cards and you can’t read 99% of them (that sounds like an exaggeration, but I might be off by 1%). It’s really disgusting what players try to pass off to collectors as an autograph. I’ve featured a few here when I’m not even sure there were letters, and if you saw it written randomly on a piece of paper, you probably wouldn’t know it was an attempt at signing a name. With that in mind, my card choice for Jason Christiansen was an easy one.

I have featured the 1996 Leaf Signature Extended set here twice. The first was Charlie Hayes, who has a beautiful autograph that you can read and appreciate. The second was Jon Lieber, whose autograph looks like he signed it with his feet. The autograph by Christiansen does not disappoint. 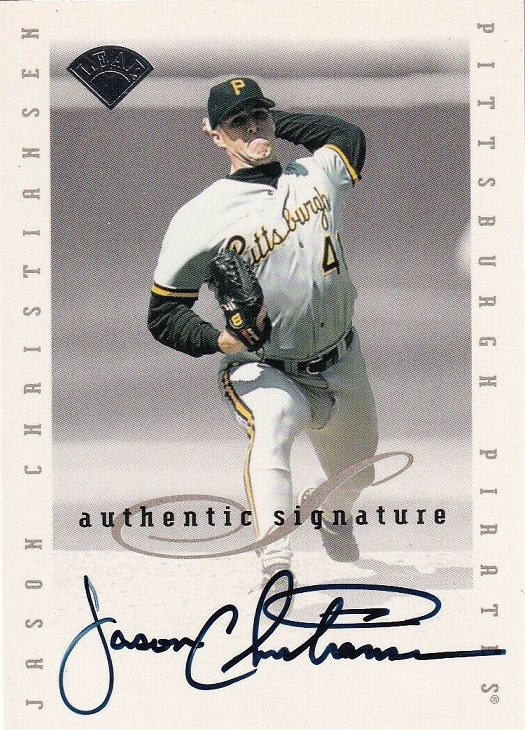 Look at that autograph. That is a thing of beauty, even if it does trail off a bit at the end, which is acceptable in my book. If you saw that autograph in a book of Pirates autographs, you would have no trouble identifying him as the owner. Well done, my good man. This set has a nice look, reminds me of some other sets from the 1990s when writing down the side of cards was a short-lived fad (thank goodness). I like how all of the photos have the player in color and the background is a grey/white combo, but look down near his knee and below, he’s fading into the background (or coming out of the background into color?). This set has a nice look, and the autographs, when done nicely, look great on the cards. 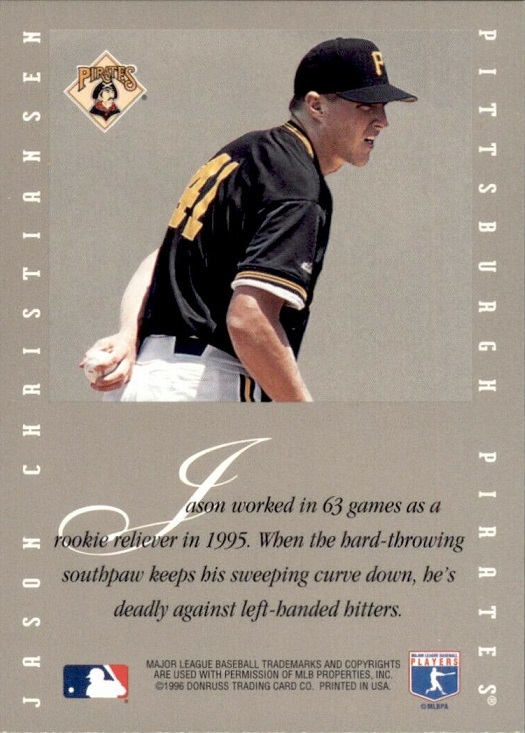 The back adds a second photo and they did a nice job here of getting a completely different look. The angle, the pose and the uniform are all different. That’s how you do a second photo. I like how the dark gray works well with the front design. Both are good looks. Besides that, there’s not much going on here on the back. They don’t even give you any bio info like his age, birthplace and how he arrived with the team. They give a very quick summary of the player, telling you he pitched 63 games as a rookie and lefties had trouble when he was on his game. A quick check of the stats says that lefties batted .210 against him, with a .676 OPS. Not exactly “deadly”, but definitely acceptable results. I also like that they added that great Pirates logo in the top left.

This card is plentiful on Ebay right now and just two have sold in the last three months. Both of those went for under $3 delivered, so if you want a nice looking autographed card of a guy who pitched six years for the Pirates before he brought in a very popular player in a deadline trade, then this is the card for you. As for the current active auctions, there are three of them on Ebay for $3 (or a little less) delivered. No reason to pay any higher than that, but the prices go all the way up to $10. Happy Collecting!