This is the third time that we are using a 1991 Fleer card in our Card of the Day series, which is pretty light considering that the 1990 team was a playoff team full of great names in Pittsburgh Pirates history. We are also now almost 29 months into an almost daily series, so three seems really low. However, I was leaving out some key details in that first sentence. One of the 1991 Fleer cards was from the Ultra set, while the other one was from the Fleer Update set. This is the first card here from the regular 1991 Fleer set, though I’ll note that it has the same look as the Update set, which was produced later in the year.

This particular card set looks like it was produced specifically for the Pirates. You’ll see what I mean in a second, as we take a look at the card of outfielder Carmelo Martinez, who spent a month with the 1990 Pirates and another month with the 1991 Pirates. He was born 62 years ago today, so he gets featured today on one of the few cards that shows him as a member of the Pirates. Here’s card #44 from the 1991 Fleer set. 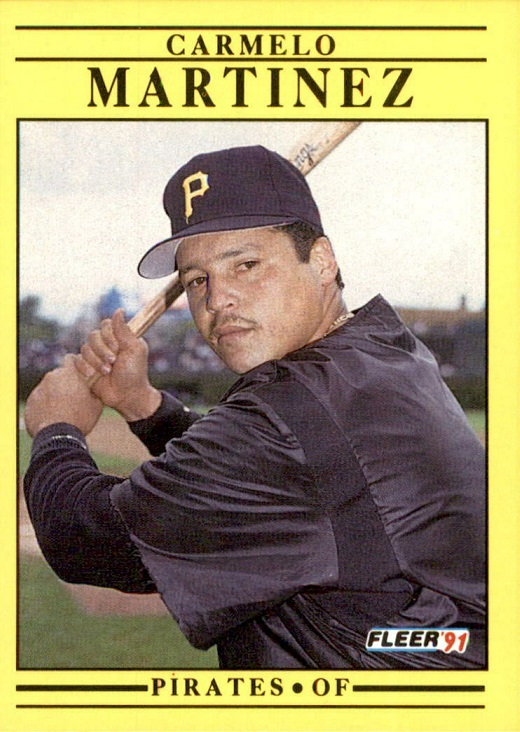 Take one look at this card and you might think that it’s either a set that only contains Pirates players, or it’s one of those sets that changes the front design based on the team shown. It is neither. The entire set looks just like this card, with the yellow border and black stripes/writing. The top part made me think of the pillbox cap when I just looked at it.

Martinez wasn’t with the Pirates for long in 1990, but Fleer was able to grab a photo of him at Wrigley Field during the final month of the season. The Pirates played there September 18th-20th, so the photo was taken during that three-day stretch. As a side note, he didn’t play in any of those three games. 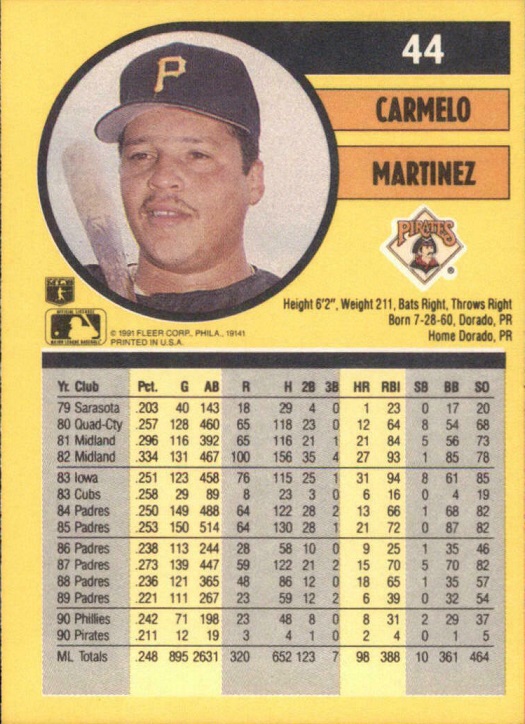 The back of the 1991 Fleer cards actually caters to the team colors, but only in the top part. In this case, the black around the photo and the box for the number are specific to the Pirates. Other teams will have their primary color in those spots. This back checks off three things I like to see. The second photo is always welcomed, as long as it’s a different photo from the front. They included the Pirates logo on the back (did you notice it was missing from the front?). They also included his entire career stats. As you can see, Martinez was a slugger in the minors and he put up decent stats in the majors over a short time. His big league career ended in 1991 when he played for three different teams, including 11 games for the Pirates before they traded him to the Kansas City Royals for pitcher Victor Cole.

This card is easy to find for sale on Ebay, with 30 auctions. There’s nothing special with any of them, so all you have to do is watch the shipping charges because some sellers are crazy with what they charge for one common card. One particular auction will be over before you see it, but someone actually listed this card for a starting bid of one cent, with free shipping. It’s entirely possible that the seller will lose money on that because there aren’t a lot of people out there looking for a Carmelo Martinez 1991 Fleer card. There are a handful of auctions going for under $2 delivered, which is typical of a common card.

Might I suggest going for a team set, since all of the Pirates cards look great in this set with that front design. You can get the entire team for $5 and also get Bonds, Bonilla, Van Slyke, Drabek, etc