Today’s Card of the Day celebrates someone who was busy celebrating their own birthday yesterday. We went with the tribute article for Dick Schofield yesterday, pushing this article back a day. Drabek has only appeared here once before, and it was for his 1991 Score All-Star card. If you don’t know that card off-hand, it’s one you’ll want to check out. I really owed him a second article a lot quicker than one year and one day later, but I’m sure he will forgive me.

Anyway, I had plenty of choices for this card because Drabek put in some years with the Pittsburgh Pirates, and it was during a time when plenty of cards were being made. So I just scrolled Ebay until I found a card that caught my eye. Usually I would look for a set that was overdue, but I went for visual appeal here instead. I chose the 1992 Leaf set because of one detail that really stood out. So here’s a look at card #11 from that set, featuring Pirates pitcher, and 1990 Cy Young winner, Doug Drabek. 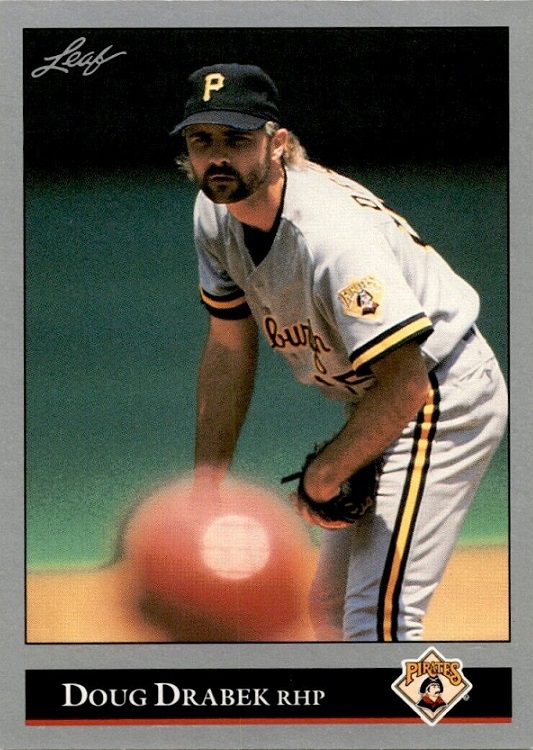 I really like the look of the 1992 Leaf set. I’m a fan of the gray borders and the use of the Pirates logo on the front, as well as the look of the section for the name/position. Also, the Pirates road grays work great with the look of this set, especially here with the sleeve logo in full view of the camera. That isn’t what drew my attention though. It was the starter beard on Drabek that really stood out among all of the other cards I looked at before picking this particular one. I’m going to quick skip ahead to the back of the card because you’ll see what I was seeing with all of the other cards I scrolled through. 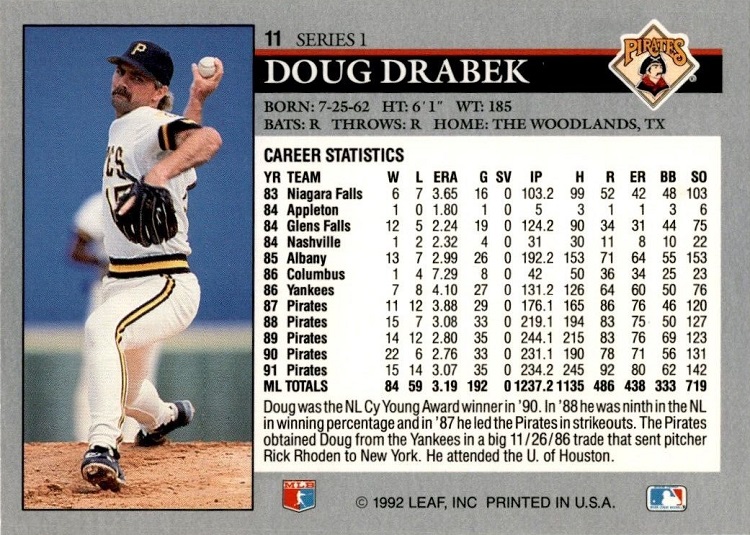 The back has a second picture and that’s more in line with the look of Drabek on all of the other cards I perused through. I like that they give you the second photo and the fact that he’s wearing the home whites. Obviously they didn’t take those photos on the same day, so I appreciate the contrasting looks.

Leaf continued the gray border look on the back, and for good measure, you get a second Pirates team logo. If that’s not one of your favorite baseball logos, then you’re probably in the wrong place. I really like that they included all of his stats in pro ball, and the black writing on the write background makes the stats easy to read. Sure, they didn’t include all of the statistical categories being used often back then, but you get enough to give you an idea of how good Drabek was with the Pirates. You also get some fun facts at the bottom of the card. Not mentioned there is that he had one more year left before free agency.

I assume that you are interested in this card, so let’s get right to the prices. There’s a second option to this card and it’s called the “Black Gold” version, which is tougher to find than the regular card. You also lose some of what makes this card look so great, because that card changes the border colors to black, and it adds some gold foil. If you want that version, there are seven on Ebay prices between $2-$5. The regular card can be bought in the low-end version of that price range. There are also two of these with autographs, and they can be had for $13 each. Perhaps surprisingly, there are zero sales for any 1992 Leaf Drabek cards on Ebay in the last three months.