Dick Schofield played eight seasons for the Pittsburgh Pirates. He joined the club in a mid-season trade with the St Louis Cardinals in 1958 and left in a mid-season trade with the New York Giants in 1965. In between those two deals, he played 579 games for the Pirates, which includes three games during the 1960 World Series. He recently passed away at 87 years old. I put him on the first open day on the schedule, so we can pay tribute to the man who played parts of 19 seasons in the majors.

This is our third appearance here for Schofield. His first was a look at his 1961 Topps card. His next article was his 1985 Topps card that he shared with his son. Usually when I include someone with multiple card options, I try to find the set that hasn’t appeared here in the longest time (sometimes not at all). However, I just went for looks with this card, picking whichever card caught my eye. Truth be told, my favorite Schofield card is his 1961 Topps, so my scrolling through Ebay options determined that his 1963 Topps card is my second favorite. Here’s a look at that card, which is #34 in the set. 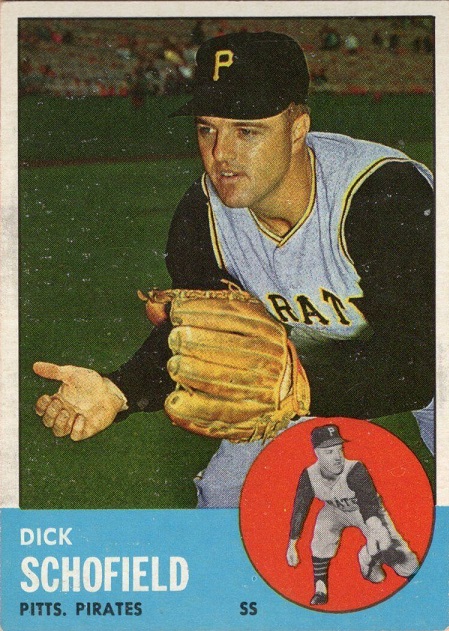 Schofield’s biggest contribution to the Pirates came from his bat when he replaced MVP Dick Groat late in the 1960 season and batted .403 over 21 games to help them get to the World Series. That’s probably what he is most know for in Pittsburgh, but overall as a player, he is most known for his defense, and ability to play “several infield positions” (you’ll soon see why that is in quotes). So I was really looking for a card that showed off the defensive side of his game. Sure they are staged action photos, but both of them used on this card highlight the defense.

The 1963 set was one that didn’t match up design colors with the team colors, and they didn’t match up all of the players from the same team. That blue and red color combo at the bottom can be found on the Roberto Clemente card and the Donn Clendenon card, but all of the other Pirates have different combos using blue, red, green, yellow and orange. 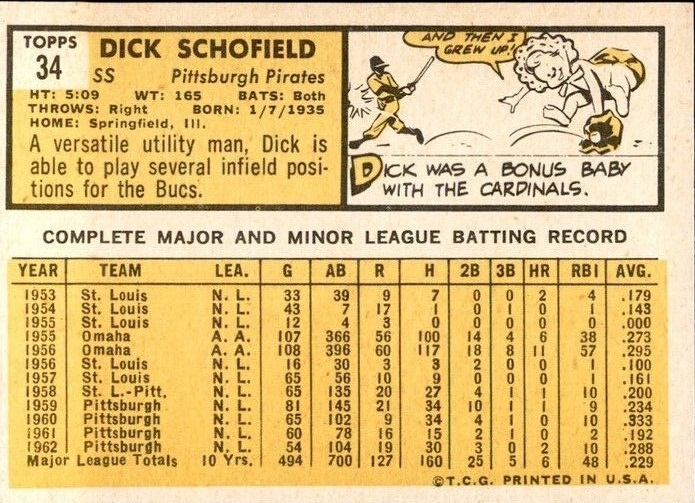 I don’t think I’ve ever heard of a guy being able to play several infield positions. Last time I counted there were four positions labeled as infield spots, but even if you count pitcher and catcher, I’m not sure I’d say six is several. The thing is, Schofield never played first base (or pitcher or catcher), so he played three infield spots. At that point, you might as well just name the three spots.

If you didn’t read his bio, one thing you might notice here is that is say those are his complete pro records and it starts with three seasons in the majors. Check the age there, he put in two seasons in the majors as a teenager before he played his first minor league game. The cartoon sort of tells you how that happened. Basically, his signing bonus was too high to be sent to the minors until he spent two full years in the majors. That rule was put into place to prevent teams from stocking up on the top prospects just because they had money. If they signed those players, it usually shortened their bench because very few Bonus Baby signings were actually ready for the majors.

If you’re interested in this card, there are 125 auctions for it at the time of this write-up. There are a few extremely expensive ones that are ungraded, but said to be in high grade. The highest actual graded card up right now is a PSA 6 and they want $35, though there’s a best offer option. There are several (literally) signed copies in the $8-$15 range. As you can imagine, he had almost 60 years to sign copies of this card, so they are out there. You can get a decent looking copy (not signed) for $3 delivered, and a few bucks more for a nice copy.