Today’s Card of the Day pick comes from the 1986 Topps Traded set, our first look at the set in this series. That’s not really surprising considering that it only includes five players, and all of them have plenty of other options that show them on the Pittsburgh Pirates. Our player choice lines up with today’s history article. It is the 58th birthday of Barry Bonds, who played outfield for the 1986-1992 Pirates. This is his fourth appearance in this series, and considering that he put up 50.3 WAR with the Pirates, he probably should have been here a few more times by now. Despite only playing seven seasons in Pittsburgh, he ranks ninth in team history in WAR, trailing some heavyweights in team history, and just ahead of some other huge names in that category.

Bonds debuted with the Pirates on May 30, 1986, which was much too late to be included in the regular 1986 Topps set. They probably didn’t think that he would be making the majors so soon either, especially considering that he only had a partial season of Class-A ball to his credit going into 1986. He flew through the minors, and ended up on this late-season additional set, called Topps Traded. The set went in alphabetical order, so Bonds ended up on card #11 in the set, one spot behind teammate Mike Bielecki. Here’s a look at the Topps rookie card of Barry Bonds. 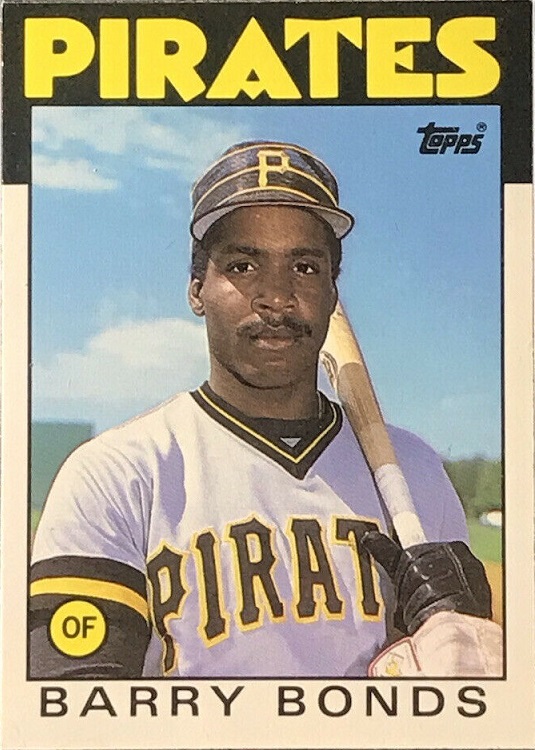 The front design of the 1986 Topps Traded cards look exactly like the regular 1986 Topps cards. They all have the slightly bigger white border around the bottom of the card, and the black border up top, with the team name printed in a team color. That black border section really shows any flaws in the card. It’s a smaller version of the 1971 Topps set, which has that same visual issue.

Topps was smart enough to get a Spring Training photo of Bonds in 1986, so they had something to include in this set. I love that they got him pictured in the pillbox cap. A few other cards also have him wearing that cap, but most pictures of him in Pittsburgh will show him with the regular style cap. 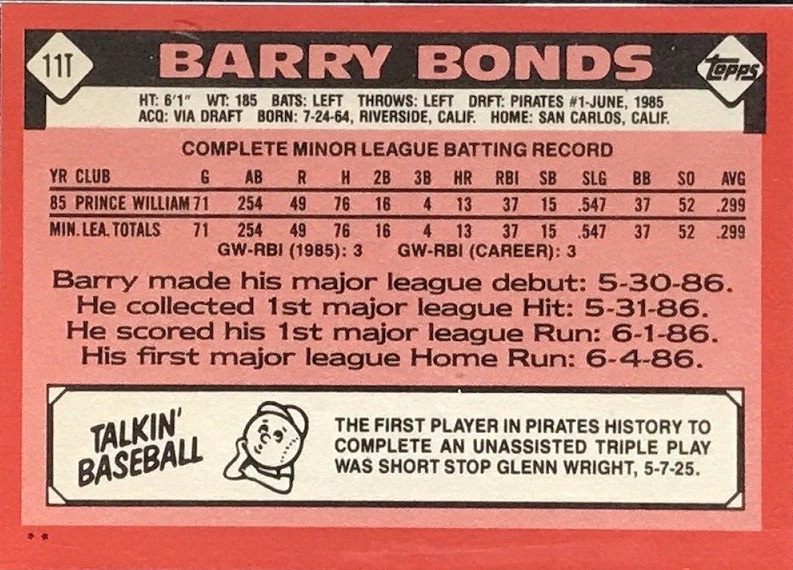 Here’s where you can tell the difference between the Traded set and the regular set. Without knowing the main difference, you can tell by the card number. This is “11T”, with all of the Traded cards having the T in the number. The bigger difference is in the color of the back here. The back border on the regular Topps card is a dark red, while the pink you see here is a lighter dark red than the border. The white you see on the back here is gray on the regular set. Side-by-side, there is a huge difference. One is bright and cheery, while the other is all business.

The Traded cards have fun facts that occurred during the 1986 season, even though their stats only show the previous season. I like the Talkin’ Baseball fun fact. The Pirates are still waiting for their second unassisted triple play. Slowly coming up on the 100 year anniversary of that feat.

Here’s the fun part of this article. The pricing section. The card is both hugely popular and easy to find. It can be found be relatively cheap and wildly expensive. A search of Ebay says that there are “1,300+” results. Even they can’t count how many there are listed right now. Nearly the same amount have ended in the last three months, with “1,100+” sold auctions. I’ll check the prices for those instead, since that’s what people will pay for the card. The most expensive one sold is $745 for a signed PSA 9. Three other graded autographs with no number grade/authentication only, sold in the $520-$530 range. A PSA 10, not signed, ended for $500, but others have recently ended for closer to $400, so that one was a bit of an outlier. If that price is reasonable to you, then you should have no trouble finding one. While they are rare in that grade compared to the overall population of the card, they are not rare in general. If you just want a nice ungraded one in very nice shape, they end every day in the $3-$5 range delivered.