On this date in 1996, the Pittsburgh Pirates traded pitcher Danny Darwin to the Houston Astros for minor league pitcher Rich Loiselle. It turned out to be a very good trade for the Pirates. Darwin was a one-year free agent signing on a team that had a 43-54 record at the time of the trade. They were going nowhere that season. He would have been lost to free agency anyway, so they ended up dealing him for Loiselle, who pitched for the Pirates for parts of six seasons.

Darwin signed with the Pirates in February of 1996, so his actual time with the team didn’t even last six full months. The late signing date meant that he wasn’t getting included in any of the early sets that would have him listed with the Pirates, forget ones that actually showed him in the team uniform. However, one set had perfect timing. The 1996 Fleer Update set was produced/put out at just the right time-frame, so that he ended up being pictured on the Pirates before he was traded away. The release date of the set allowed Fleer time to get the photo and then print the card, obviously not knowing that he would soon be on a different team. Many people were getting this card when he was already with the Astros, possibly everyone was if one site is correct.

One online source actually says that this set was released in December of 1996. I’m definitely not saying they are wrong, but I will say that it would be odd if they are correct. Zane Smith is shown with the Pirates and he was released on July 6th. If these cards didn’t come out until December, then why don’t they have 1996 stats? Did Fleer really commit to the players in the set that early that five months before the release of the set was too late for any changes at all, including a line of stats? Possibly, but imagine getting these cards for Christmas and seeing Smith, Darwin and Charlie Hayes, who is also shown on the Pirates, and all of them were gone for at least four months by that time.

Here’s a look at card #U175 from the 1996 Fleer Update set, featuring veteran pitcher Danny Darwin. I planned on using the regular version of the card, but every scan I found of the card was a generic low-quality version that Ebay uses for easier listings of common cards. So I ended up using a variation of the card. This is the first appearance in this series for the 1996 Fleer set, either base or the update version. 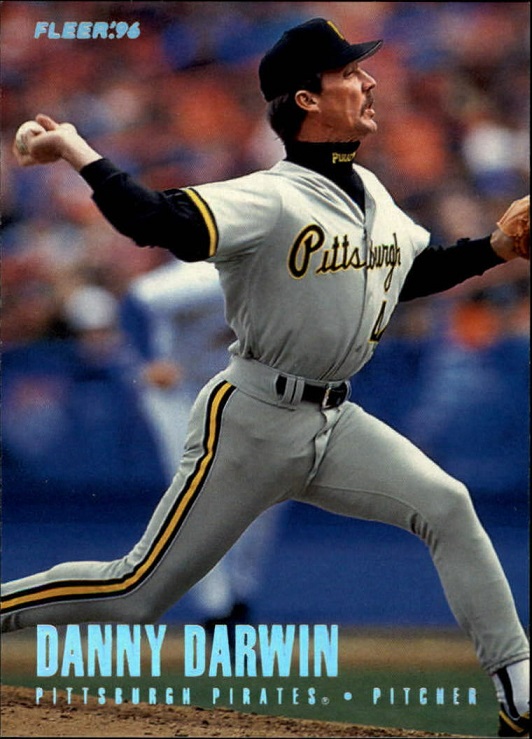 Part of the intrigue with this set is that Fleer claimed to be doing something different. The cards had a borderless look and a matte finish. However, this photo is actually one of the Tiffany insert cards, which had a glossy finish. They were included one per pack with ten of the regular cards, making the Tiffany cards 10x tougher to find that the regular cards in the set. The borderless look wasn’t really any different by 1996. Other sets were doing it a few years earlier, but if you collected cards for a long time prior to 1996, then it was still a rather new idea, just not original by the time this set came out.

The Tiffany version is interesting in comparison to the regular, because the writing on the regular card is a darker brownish color, so on some of the backgrounds it really blends into the card. These Tiffany cards had that bright sea blue writing that really stood out on the card. There was no confusing the two cards, especially once you had both in hand and the fronts of the cards had completely different feels. One site notes that the matte finish was great for getting autographs, but horrible for sorting cards. I can see that being true. 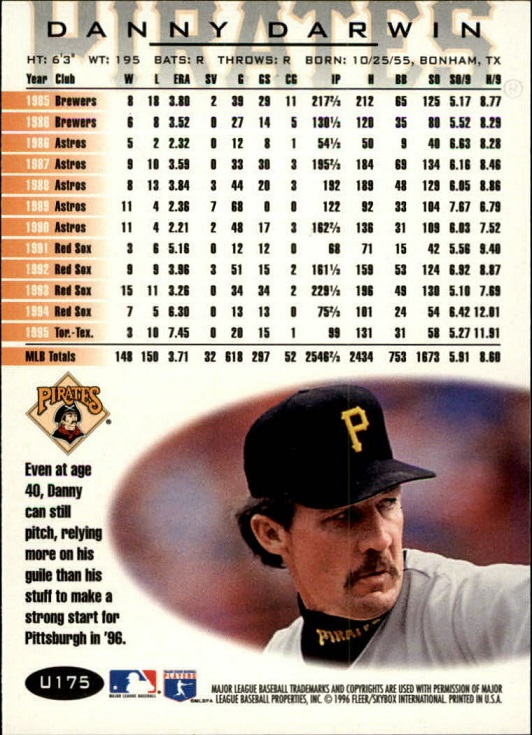 The back has a very cool look at the very top with Pirates written across the top as part of the background. I’m always a fan of the second photo on the back, especially when it’s a different photo than the front. You would think it would be obvious to use two different photos, but we have covered sets here that just cropped the front photo and used it again on the back. If these cards were really released in December, you would think they could mention something in that little bio section. As a side note, those stats use the preferred black writing/white background colors, but they sure are tough to read, even on a scan that is much bigger than the card itself. The strange thing here is that they didn’t include all of his seasons, but also made no mention of that in the stat section.

If you’re interested in the Tiffany card, there are three on Ebay right now and the price is $5 delivered for the two cheaper auctions, which includes $4 in shipping in both cases. The other one is $8 delivered and half of that is shipping. Someone has the regular version autographed and that is $6 delivered. The regular version can be had for $3 delivered. Between both sets, there are only eight auctions listed.