Today is the birth date of Pittsburgh Pirates catcher George Gibson, who was a workhorse behind the plate back when the equipment was inferior and the style of play was much rougher. For 90 years, he held the Pirates team record for games caught. Gibson has been in our Card of the Day series three times already, but twice he was part of a card that had two players, so this is just his second solo appearance. The first one was in August of 2020, and it was a guest submission by Martin Healy Jr, who literally wrote the book on Gibson and contributed three articles here. Sadly, he passed away last year, otherwise I would have asked him to contribute more articles, and I’m sure he would have accepted, as he loved to sing the praises of George Gibson.

Today’s Card of the Day comes from the 1909 E92 set, known as the Dockman set (or some say Dockman & Sons) due to the advertisement on the back. This card is really interesting, but picture someone saying interesting when they really mean “what were they thinking?”. Here’s one you just have to see for yourself because a description won’t do it justice. 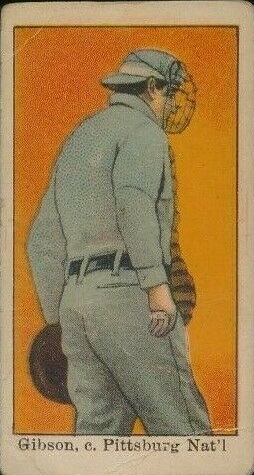 Someone picked out this specific picture of Gibson to use for this card, and then artist got that picture and hopefully questioned what they were thinking with their selection. Maybe they did it internally only because they really needed the 50 cents they received for their artwork (don’t quote me on that price). I tried to find the original photo, but didn’t see it. That might be due to the fact that someone has it and has no clue who is behind the mask because they are not facing the camera. Imagine being Gibson and being like, I guess that’s me. I do play the catching position and I wear a glove. I’m sure he always wanted a card of himself from behind in full uniform and catcher gear.

After saying all of that stuff, the head-scratching photo selection is what makes this card so cool. It’s not unique, there’s a card of Hall of Famer Frank Chance from the same set that is shown from completely behind, as in there is zero chance you would know it is Chance unless you took the photo, and even then the odds only go up to about 25% chance it’s Chance in your mind. 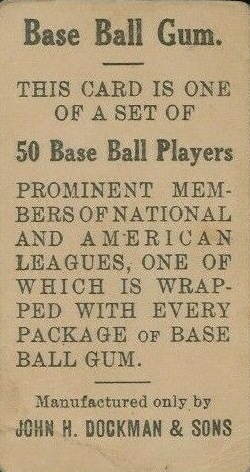 The back tells you some good things about the set, including the size of the set, how they were distributed, and how they came about picking the players. There are plenty of sets from back then that included minor league players and obscure players, so it wasn’t a given that you were getting just star MLB players. As you can see on the bottom, that’s where the Dockman name for the set originates. As I said, some people will say “Dockman & Sons”, but I’ve never heard anyone mention the first name. It’s a good first name too.

If you are interested in this card of the great Pirates catcher, you have three options on Ebay right now. The lowest priced one is the scan shown above, which is an SGC 2 and the asking price is $150. The next one is a PSA 4 and they are asking $280. The final one is a PSA 5 and their asking price is $500. This same card front is in the E101 set and that is priced about the same. So if you want the card for the pose, then don’t limit your search.