If you’ve already read today’s This Date in Pittsburgh Pirates History article, you know that today is a light day for news. Only two former players born on this date, and one transaction of note. One of those players doesn’t have a card with the Pirates. The other is Dick Smith, an infielder for the 1951-55 Pirates, who made it onto one baseball card. We have used the 1955 Bowman set here five times already. I won’t apologize for that frequency, it’s one of my favorite sets ever, near the top when you talk about post-WWI sets. We are going to look at the set for a sixth time today because that’s the only option for Dick Smith. So here is card #288 from the set. 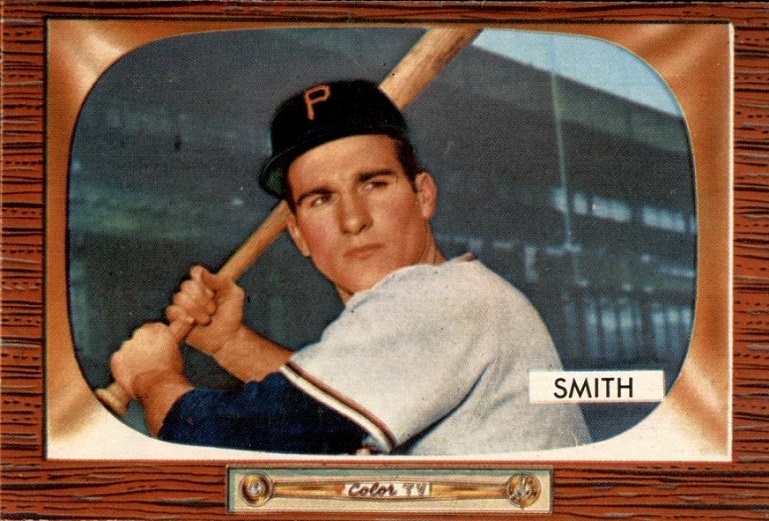 The front of these cards have one of my favorite set design ideas ever. The color TV was a huge deal in 1955 and they capitalized on the popularity by using a TV set as the design, then putting it in color. If they did this same exact thing a year earlier, people would accuse them of being witches. The great thing is that not only was this design perfect for 1955 specifically, the look still works today because it stands out from everyone else. What makes it even better is that it is a horizontal layout for the entire set. They had to do that for the theme of the design, but there weren’t a whole lot of horizontal cards in baseball card history at the time. Interesting side note, Topps also went with an all horizontal layout for the first time in 1955, then doubled down on it with the amazing 1956 set. What a time to be alive and collecting cards! 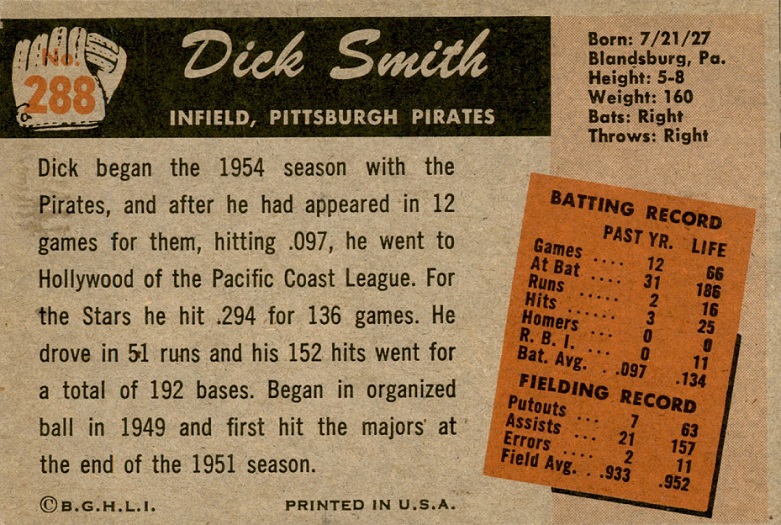 The back has a brief bio of the player and then limited batting records. They also include fielding records, which used to be a lot more popular to include on cards. I mentioned that he played for the 1951-55 Pirates and you see by those lifetime stats that he only played 66 games over those first four seasons. Unknown at the time that these cards were released was the fact that he had zero at-bats remaining in his career. He played four games for the 1955 Pirates and walked in his only plate appearance. He still had five more full seasons of baseball left after 1955, but his big league career was finished on May 1, 1955 when he pinch-ran in the bottom of the ninth with two outs and the game ended shortly afterwards.

I looked up Blandsburg, PA. after thinking it sounded like a boring town and it was even worse than I imagined. There’s no S in the middle, so it’s just a Bland town with very few people and they need someone to add more to their Wikipedia page. They don’t even mention Smith, and I’m guessing he’s the most famous person from the town.

I also noticed that his birth year is off by one year (he was born in 1926). That happened a lot back then, as young kids would say they were older so they could sign or older players would claim to be 1-3 years younger so they wouldn’t be overlooked due to their age.

This card is apparently tough to find. At least that is what I read on Ebay, and there are only 27 auctions active for this card. Two of those auctions will be over before you see this article, so I’ll just give prices for the others. They range in price from $12 delivered to $305 for a PSA 8, which has a best offer option. The next most expensive is a PSA 7 for $105, which is quite a difference in price for one grade. That’s not the only PSA 7 though. There are four others that range from $85-$100. Then there’s an autographed copy. Smith passed away last year, so he had plenty of time to sign these, but there’s only one signed card on Ebay right now and the price is $74, with a best offer option. A total of 18 cards have sold in the last three months for between $3 and $26, all of them ungraded.