In 2001, Upper Deck came out with a set called Vintage, which featured cards that looked just like something out of the vault of Topps. The set is basically a remake of the 1963 Topps set, without mentioning that it’s a remake of the 1963 Topps set. One of the cards in the set is labeled as Vintage Rookies-Pittsburgh Pirates, and it features Adam Hyzdu, Tike Redman and Alex Hernandez.

Today is the 20th anniversary of the big game that made Hyzdu a fan favorite for quite some time. It actually started the previous day when he had three hits, a homer and four RBIs against the St Louis Cardinals. That was just a teaser for the next day when he hit two homers and drove in seven runs. I decided to feature Hyzdu here today to mark the anniversary, but I didn’t have a card in mind until I saw this one. Redman and Hernandez are just along for the ride, but we will look at them too, as we check out the 2001 Upper Deck Vintage set for the second time with card #368 from the set. 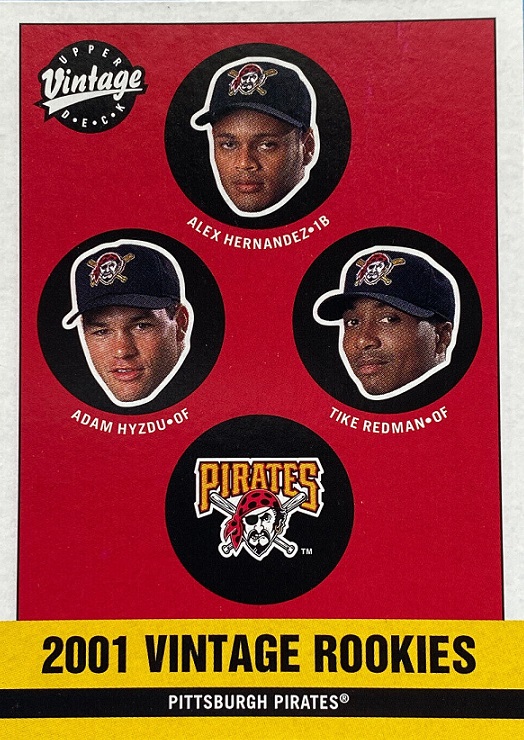 If you’ve never seen a 1963 Topps rookie card, well, you’re basically looking at it right now. They used the same photo circles with floating heads on a one color background, with the player’s name underneath. They didn’t sort them by team in 1963, so here you get a specific card just for the Pirates, along with that great Pirates logo. For Hyzdu in particular, he really could be considered a vintage rookie, but this is far from his rookie card. He was drafted in 1990 out of high school and then appeared in the 1991 sets from Score, Bowman and Classic, which are his actual rookie cards. However, he didn’t debut in the majors until September of 2000, so he was still a rookie in 2001. More on the other players after we check out the back… 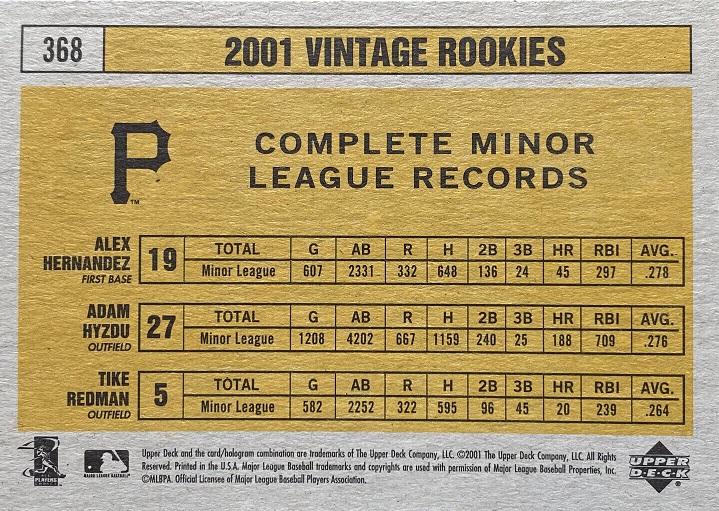 The back of this card has a vintage feel, sort of like a 1963 Topps card. Upper Deck decided to just use minor league stats at the time, even though all three players saw time with the 2000 Pirates. Redman and Hernandez were both five years younger than Hyzdu (technically they are still five years younger than him). You can see the difference in age displayed in the “games” column of the stats. Hernandez and Redman had a total of 1,189 minor league games. Hyzdu had 1,208.

Being Pirates fans, you know that these players really didn’t pan out. Upper Deck wasn’t taking a huge swing here by featuring three guys with previous big league experience. No matter what happened, you’re featuring three Major League players on the card. Redman wasn’t a bad hitter during his big league time, but he only played 432 career games. That’s 432 more than me, but not exactly what you hope for from a rookie card. Hernandez played 20 games before this card came out and seven more afterwards. That was his entire big league career, and he really didn’t stick around long either. He was done with baseball before his 30th birthday.

That leaves Hyzdu, who played parts of seven seasons in the majors, though no full seasons. He lasted a total of 221 games, though he qualifies as a good story because of how long it took him to make the majors. He also got a World Series ring as a member of the 2004 Boston Red Sox.

If you’re interested in this card, there are only a few options on Ebay right now. Eight sellers have the card listed right now, and two of you loyal readers can get the card for about $2 delivered. Then it goes up to about $3.50, and some people just have high shipping charges on a cheap card. The only auction of note is one that is signed just by Redman. That one is $10. One of these sold in the last three months on Ebay. That price was $1.70 delivered.