Pitcher Earl Hamilton spent six seasons with the Pittsburgh Pirates and he is one of the most obscure players in team history who stayed that long with the team. Part of that is due to how long ago he was around, but it helps (or hurts in this case) that he didn’t have any big seasons and he wasn’t part of any postseason team. The Pirates were just returning to glory as he was wrapping up his time with the team.

The 1922 W573 set is probably the perfect card to use for him. It’s a set that uses the same photo of him as more well known sets from that time period. Hamilton does actually have a bit of history in his career, it just didn’t happen with the Pirates. On August 30, 1912, while as a member of the St Louis Browns, he tossed a no-hitter without recording a strikeout, becoming the first player to accomplish that particular feat. What is perhaps most ironic about that no-strikeout game is that it came in the year in which he set a career high with 139 strikeouts, a mark he never really approached in any other season. Hamilton lost a game three weeks later in which he recorded 14 strikeouts. 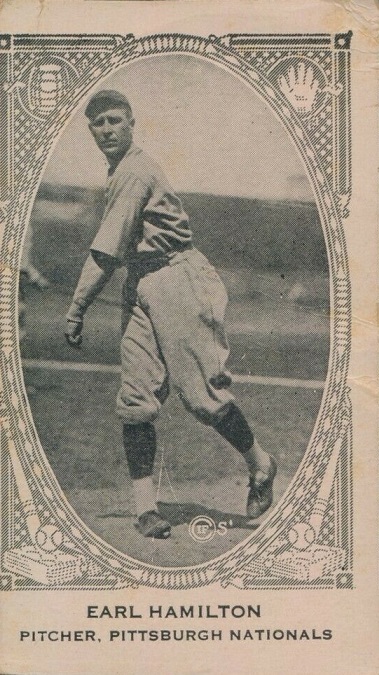 I’m not including a back scan here, but that’s actually how you can tell that this is a W573 card. They use the same fronts as a 1922 E120 card and a 1922 Neilson’s Chocolates card, so you have to flip over the cards to see the difference. The E120 set has a checklist on the back. The Neilson’s Chocolates card has an ad for a company by the same name. The W573 is the Rodney Dangerfield of the group, which gets no respect because it has a blank back. Some companies would stamp their own ads on the backs, but those cards are then referred to by the ad. The E120 set usually has a green tint to the design/photo, so those can be easier to tell apart, but there are ones on Ebay that have the same coloring as the card you see above.

I’m a fan of the cards from these sets because they have so many great photos of players from that era. They used a lot of action shots, some horizontal layouts as well. I also like the design. It’s funny, but it reminds me of something you could do on early computers and you thought it looked great. Yet these cards were being printed 80 years earlier. They really put a lot into the design, which just adds to the overall appeal of these cards. I would be a big fan of the set without any design at all on front because of the pictures. You might notice that this calls the team the Pittsburgh Nationals. All of the teams have the American/Nationals by the city name, instead of the team nicknames that we are so used to now.

If you’re interested in this card, then I assume the two other sets might also be of interest, so I’ll give prices for all three, since they are all available on Ebay. Starting with the most expensive first and working my way down. There is an overpriced PSA 4 E120 card for just over $400, but then you go all the way down to $233 for a PSA 5 of the Neilson’s card, and that has a best offer option. The Neilson’s can be found in PSA 3.5 for $225. While that also has a best offer option, if it’s not a deep discount, than the PSA 5 is a much better deal. The next one is an E120 ungraded for $75. Then a Neilson’s ungraded for $66, with a best offer. The card scanned above is the only W573 for sale and it is $48.50 delivered. Finally, an E120 with green tint is $35, with a best offer option.