Today’s Card of the Day comes from the 1949 Bowman set, and honestly, I can’t believe that I have waited this long to get to the card. Today’s featured player is Johnny Hopp, an outfielder/first baseman, who played 331 games for the Pittsburgh Pirates during the 1948-50 seasons, though only one of those years was a full season, and probably not the one you would expect. Hopp was traded during the 1949 season, then hopped back to the Pirates a short time later when the original deal was voided. The full season was 1948.

This is the fourth appearance for the 1949 Bowman set. We have already featured Fritz Ostermueller, Rip Sewell and Tiny Bonham. At some point we will definitely get to the Ralph Kiner card in the set, plus there are 13 other cards besides him to cover, including Danny Murtaugh. Today we are looking at card #207 from the set, featuring Johnny Hopp, who was born on this date in 1916. 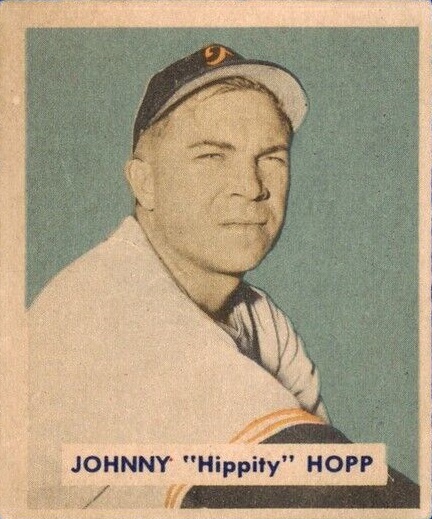 I know you immediately saw why I said I can’t believe I haven’t covered this card already. What a great nickname. The 1949 Bowman set was an odd one, where they used nicknames on the front for some players, didn’t for others known by those nicknames, and just completely left the name off of the front of other players. All of the cards had a one color background, but they weren’t all the same color. All of the photos have that off-color look, like the old colorized photos. Most of the cards in the set are similar portrait style photos to what you see above, but a few are staged action shots. 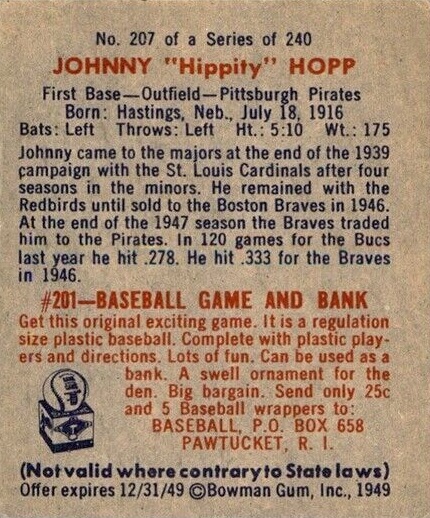 There’s that nickname on the back too! It’s amazing that Baseball-Reference doesn’t list that nickname for him on his page. They have “Cotney” listed, so I decided to put my Newspapers.com subscription to good use (I actually use it almost every single day) and see which nickname I can find more often. As a side note, plenty of players have more than one nickname listed, so it isn’t a “one or the other” type of situation.

The results are in from research and it’s basically a dead heat, with neither name getting a ton of mentions BUT there is definitely a pattern. Almost every single one of almost 150 Cotney mentions came from papers in his home state of Nebraska. The Hippity nickname was used basically the same amount of times, just shy of 150, and those came from all over the place. I have seen that before with some players who got nicknames before going pro ball, then they were given a different nickname later.

I talked about the giveaway/offer at the bottom of this card in other articles. It’s still funny to me that they suggest a specific room in the house and call the item “swell”.

If you are interested in this card, there are currently 14 options on Ebay (not including seven reprints), ranging in price from $6 as a starting bid for an auction that will be over before you read this, up to $300 for one graded SGC 88 (equal to a PSA 8). The lowest set price auction is $23 and that one is really low grade. If you want a decent looking one, you can get it for about $40 delivered. There is one interesting reprint card. Someone got it signed by Hopp and they are asking $24 delivered. The reprint set was put out in 1988 and he passed away in 2003, so he had plenty of time to sign some (same could be said about the originals).