Today’s Card of the Day is the 2001 Topps card of Pittsburgh Pirates second baseman Warren Morris, who was with the team during the 1999-2001 seasons. He really burst onto the scene as a rookie, finishing third in the Rookie of the Year voting in 1999. He didn’t pan out as hoped, but people still remember that season from 23 years ago fondly. Morris was acquired by the Pirates on this date in 1998, along with Todd Van Poppel, in exchange for pitcher Esteban Loaiza. So it’s a good day to take our first look at Morris, along with our second look at the 2001 Topps set (first was Lloyd McClendon), which was a special anniversary set for the company. Here’s card #203 from the set. 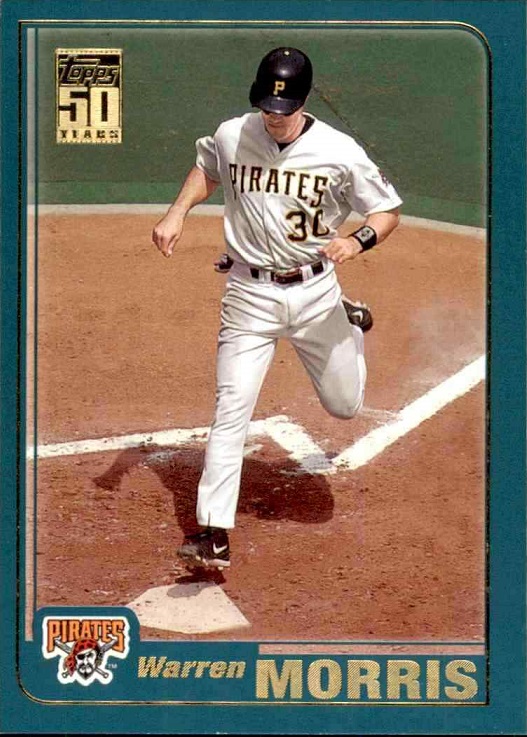 Topps had a few cards from the time period where they were taking photos from a higher level, looking down on the players. That gave you a unique perspective that you didn’t get with other cards. This is a close-up shot of Morris about to touch home plate, only a split second after his shadow reached the plate first. One thing with these unique views is that many of them didn’t get good shots of the player’s face. Honestly right here, that Pirates helmet looks photoshopped in. Take a close look at that part of the photo. Something just looks off there.

I like the design of this set. The border colors, the gold trim, the “50 years” of Topps gold foil logo. The great Pirates logo from that era, and the way they wrote out the names. I remember opening packs of these and liking the look of the set. 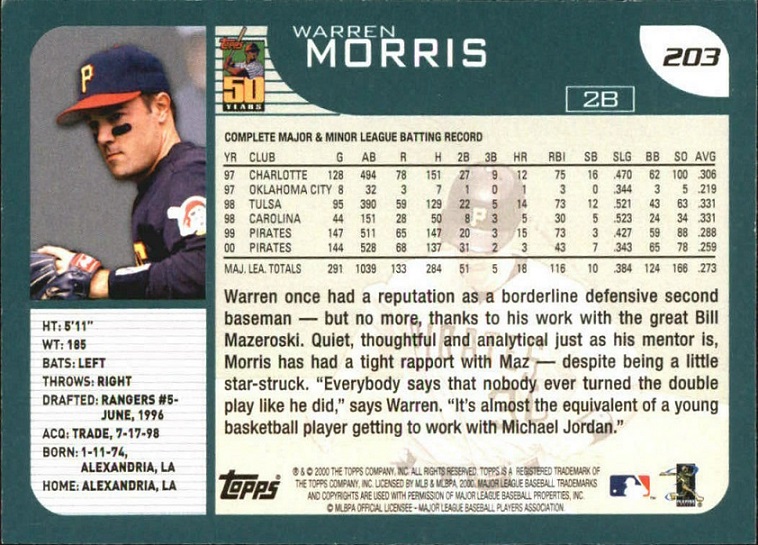 The back adds a second photo of Morris and you can actually see his face in this photo. It sort of gets lost in the stats, but the photo from the front is also part of the background of the stats. This card looks like it short-changed him on the minor league stats, but that really was his entire minor league career up to that point. He signed too late in 1996 to play any games, then it took him two full seasons to make the majors. He didn’t stay there in the majors for the rest of his career. Morris actually played more minor league games after 2000 than he did before, by a decent margin. He had 275 games before his big league debut, and 383 minor league games after 2000. His last big league time came in 2003 with the Detroit Tigers.

You have to love how Morris talks about Bill Mazeroski right here. The interesting thing here is that these cards were released late in 2000, so people were getting them in packs months before Mazeroski was elected to the Hall of Fame (March of 2001). Morris claimed to be a bit star-struck working with Maz, but adding that “HOF” to a player’s name adds a little bit more prestige to that name.

If you’re interested in this card, you can find it for $2 delivered, but there are options within the options. There are a few autographed copies out there, some more reasonably priced that others. There’s also an Opening Day set version, which has blue borders. There’s a gold version, which was limited to 2,001 copies. There’s a chrome version, another that is called limited edition, and yet another that is called a Home Team advantage card. They all have the same photo, just some changes with the card color and/or logos on the cards. Most of the others can be found for around $5, including an autographed Opening Day card.