Today’s Card of the Day is another one of those “card” articles, where it gets grouped in as a card, but it’s technically a sticker. We went through the whole stretched definition of a card recently with the pin featuring pitcher Myrl Brown, so I won’t go through all of that again. Let’s just say that card collectors group everything together as cards so it’s easier to catalog and search for items.

This one is slightly different in that very few people used these for their intended purpose, which is good because they still exist. If you have a pin of a baseball player, you can wear it all you want and it’s still a pin. You take the a sticker off of the backing and place it somewhere, it now becomes part of that item and worthless to a collector. In 1967, Topps released a set of 33 stickers that were just for the Pittsburgh Pirates. Donn Clendenon had two cards/stickers in that set, and one of them is not only tougher to find, it’s also much more interesting that the other one.

Clendenon has only been in this series once before and he was a bit overshadowed in that article because he was matched up on a 1966 Topps card with Willie Stargell. Clendenon was born on this date in 1935, so today seems like a great day to give him his own article. Here’s a look at sticker #30 from the 1967 Topps Sticker set.

Here’s the front of the sticker (the back is blank): 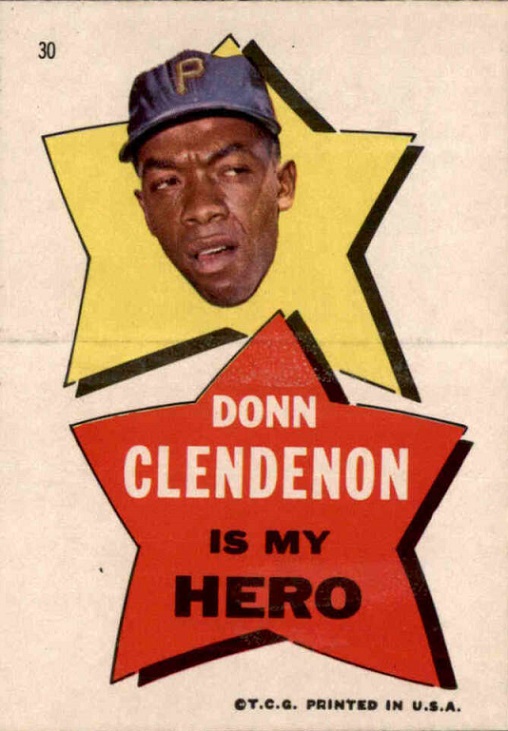 My guess as to why these stickers aren’t that popular is that the whole “floating head” look on cards doesn’t go over well. In fact, I posted a sticker from this set last year and multiple people mentioned how they hated that look, and I agree with them. This particular sticker goes beyond the floating head look by adding a huge star that says “Donn Clendenon is my hero”. I have no idea what it means, but he’s the only player in the set with that declaration. There are other players who have two stickers, such as Roberto Clemente, whose second sticker says “Bob Clemente for mayor”. The regular Clendenon sticker has a bigger floating head and his name is written in bubble letters. It’s definitely a strange set that appeals to a smaller audience.

The back of these stickers is just a regular plain cardboard backing, with a break in the middle, so you can peel it away from the sticker. The back is another reason that they aren’t that popular. It adds nothing to the look of the sticker. Also, that break led to some creases horizontally across the middle of the stickers kept in “card” form.

The other Clendenon sticker is much easier to find on Ebay, though I wouldn’t say it is common. There are 12 auctions for “Clendenon Topps 1967 sticker” and nine are the regular version of his sticker. The lowest priced one has a $16 price tag, with a best offer option. The three hero versions of the sticker range in price from $24 to $52. Three of each have sold in the last three months, and only one ended over $20 ($23 for a regular version). Basically, if you want one of these, then you’re probably better off waiting for a straight auction style listing, because those go the cheapest.