Today’s Card of the Day features Pittsburgh Pirates pitcher Earl Francis, who was born on this date in 1935 in Slab Fork, West Virginia. The town population is listed as 202 people now, so it’s impressive that a Major League baseball player came from such a small town. Francis isn’t the most famous person from his small town, believe it or not. Famous singer Bill Withers was also born there, as was a boxer named Billy Arnold, whose claim to fame was being one of Rocky Graziano’s victims, though Arnold was a fine boxer himself. That’s quite a trio from a tiny dot on the map.

This is the first time in this series for Francis, who had four Topps cards to choose from for today’s subject. I decided to go with his rookie card, which was part of the 1961 Topps set. Francis debuted in the majors as a member of the 1960 World Series champions. He was a bit player on the team for about a month, pitching 18 innings over seven relief appearances, while giving up just four earned runs for a 2.00 ERA. He debuted on June 30th and played his last game that year on July 27th. It was a short enough amount of time that Topps named him as one of their 1961 rookies. Here’s a look at card #54 from the 1961 set, featuring right-handed pitcher Earl Francis. 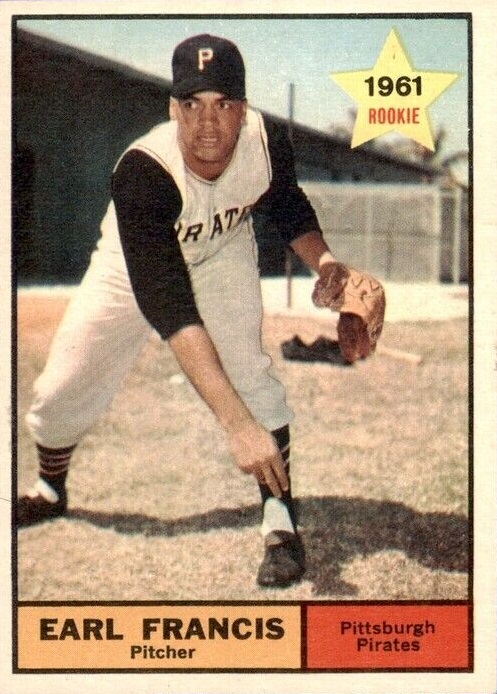 The 1961 set has a rather plain design, which had the unenviable spot in the Topps run between the 1960 set with the horizontal layout and two photos, and the 1962 Topps set, where they introduced the wood-grain border and curled up photo look. In between they decided to put the name/position and team name in two boxes with different color backgrounds and leave it at that. The box colors weren’t the same throughout the set or even within teams in the set. You can find Pirates players with blue, yellow and green boxes, as well as red, yellow and white writing. Don Hoak has the same color combo as Francis.

I really like the photo here for two reasons, besides the obvious old Pirates uniform. These follow-through pitching staged photos were extremely popular for Topps, but I like how Francis still has the pitching grip, like he actually did just release a pitch. I also like the background here and the faded grass. It just looks like they found him on some sandlot field near a barn and snapped his photo. As you can see, they included a star with “1961 Rookie” in top right corner for multiple players in the set. Hall of Famers Billy Williams and Carl Yastrzemski were part of that subset as well, though only Williams was an actual rookie card. Yaz was in the 1960 Topps set. 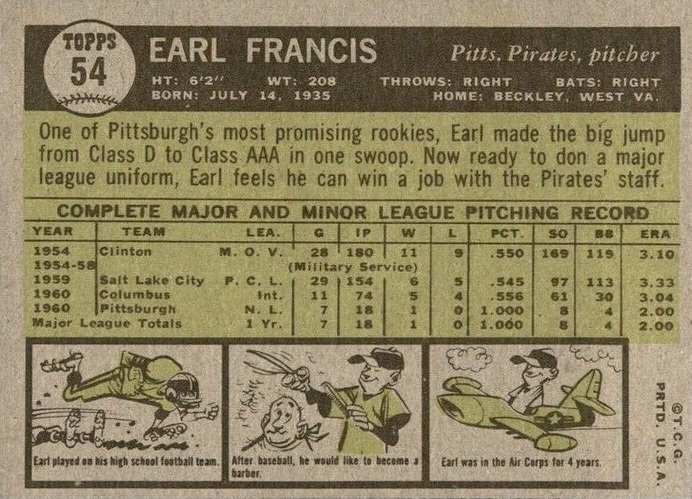 The back here looks like it could be military colors, which is fitting for Francis. He gave up four full seasons at a young age to serve in the Air Corps. As you can see, generic gray Topps man makes his appearance here three times, which is impressive because he had to represent everyone else in the set too. Francis apparently always wore his baseball hat after high school, whether he’s a barber or flying a plane that is about the same size as him. He also has the same calm look in both situations, making him an excellent pitcher in big situations. The stats show you that it didn’t take him long to go from four years out of pro ball to the majors. He came back and went right to the highest level of the minors.

If you’re interested in this card, you’ll be happy to know that supply outweighs demand, keeping the price of the card low. There are over 200 listings for this card, and quite a few of them are right about $2 delivered. A PSA 8 is the highest priced one at $91 delivered, but another seller has the same grade for $75. If you don’t need high grade, but want a nice one, there’s a PSA 6 for $17. That seems like a nice price, since it includes shipping and the graded holders cost money as well. There have been 43 sold copies in the last three months, including a PSA 8 for $45. Also, an autographed copy went for $33. He passed away in 2002, so it’s been quite some time since the last autographed card entered the world from Francis. They will just keep getting harder to find.