Today’s Card of the Day comes from the vastly underrated 1993 Conlon Collection/The Sporting News set. The featured player is Lee Handley, who has appeared in this series once so far and he was a bit overshadowed by the second greatest shortstop in baseball history. Handley spent eight seasons with the Pittsburgh Pirates, playing for the team from 1937-1941, then 1944-46. A break in service like that in the early 1940s almost always means that the player served during WWII, but Handley was the exception to the rule. He was in the minors in 1942-43, then returned to the Pirates in 1944 as more players were called into service.

For someone who played eight years with the team, Handley is a relatively unknown. That’s a combo of him being a solid role player and never playing for a championship team, though his best season was for the 1938 team that just missed winning the National League crown after a lead very late in the season. He played during a time when there weren’t many baseball card sets being made, especially his second stint with the team when almost nothing exists for baseball card collectors due to the paper drives during the war. That’s one of the reasons why this Conlon Collection/The Sporting News set is so great. They featured a large group of players who had nothing or almost nothing available for card collectors. The cards have great eye appeal as well, using the photos from iconic baseball photographer Charles Conlon. 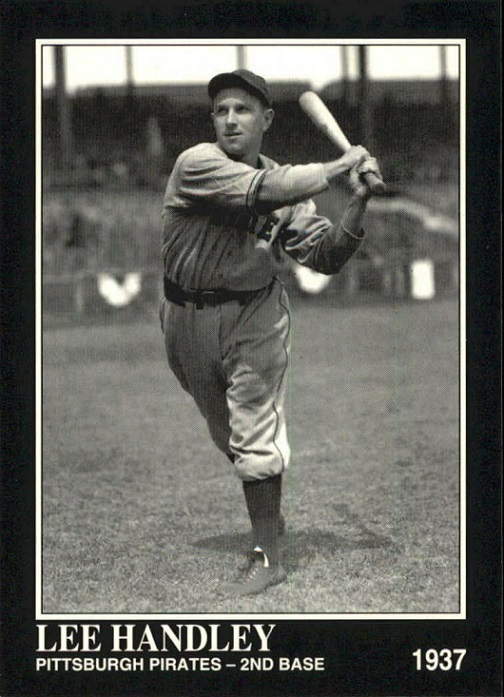 The black borders with white trim around old black and white photos gives these cards a great look. Conlon got some terrific photos of players. Many of them are images of all-time greats that you have seen before and maybe not realized that he took the photo. Others are staged action photos like the one above, which give you looks at players like Handley, who played ten seasons in the majors. He also got pictures of guys who just had a brief cup of coffee in the majors and just happened to be in the right place at the right time for Conlon to snap their photo. The “1937” in the bottom is the date of the photo and it can be found on all of the cards in the set. Handley is listed at second base, which was true for 1937, but he played the majority of his big league games at third base. 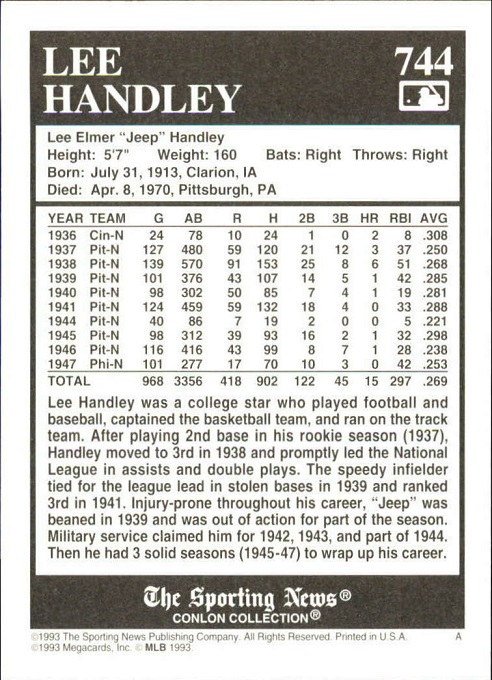 The back of these card gives you all of Handley’s big league stats, while leaving out the minor league stuff. There’s also a nice bio about him, including the fact that he was a tremendous athlete in college, starring in four different sports. They also explain the position change, letting you know that the front wasn’t a mistake, just specific to the year mentioned. His “Jeep” nickname was given to him early in his days with the Pirates. It was said that in the field he had an exaggerated hunched over setup waiting for the pitch to be delivered, which apparently worked because he was known for his ability to field grounders. He had the appearance of a jeep, to go along with his hard-nosed style that led to numerous injuries.

Remember when I said that he was in the minors for the 1942-43 seasons? Well apparently I wasn’t asked about that when they wrote these bios on the back. They write that military service claimed him for 1942, 1943 and part of 1944. He was with the Pirates for all of 1944, he just wasn’t a starter for most of the year, so he didn’t play a lot of games. I believe they just assumed it was WWII service like most people would when two years are missing, but the assumption that he missed part of 1944 because he only played 40 games probably should have been fact checked or left out.

One other note on the back and that is his date of birth. He’s being featured here today because he was born on July 13, 1913, which was 109 years ago today. Not July 31st.

If you’re interested in this card, you have just a few options on Ebay without buying the whole set. Luckily, a few sellers have the card with a cheap listing fee and cheap shipping changes, so you have options in the $2-$3 delivered range. Happy Collecting!