Today’s Card of the Day subject is a fun one for me. I like writing all of them actually, but this one ranks a little higher. That’s because I’ve never see the card before and knew nothing about the set other than some Babe Ruth cards I’ve seen in auction house listings. This is from a 1928 set called Sociedade Industrial, and it features Pittsburgh Pirates pitcher Lee Meadows, alongside Hall of Fame pitcher Herb Pennock.

One of the reasons I never knew about this photo is that the checklist I saw only lists Pennock. I’m guessing whoever identified the players didn’t know that Lee Meadows was the other player on the card. One of the cards on the checklist is listed as unknown, but I believe that means that no one has found card #102 yet to add to the checklist. These cards are rare, and part of a set that contains other sports, such as boxing, tennis and golf. Here’s a look at today’s subject. 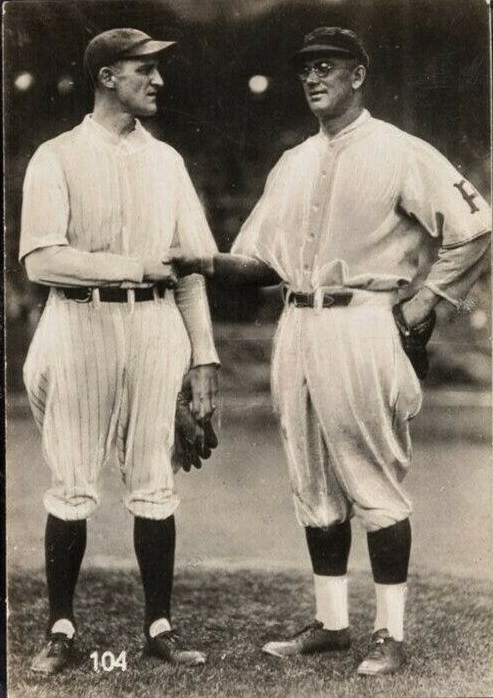 There you see Pennock (on the left) and Meadows shaking hands for a photo op. My guess is that this was taken before game three of the 1927 World Series. The first reason is the uniforms, the second is that there wasn’t much interleague play back then, which was not at all on the regular season schedule, but they played in-season exhibition games, sometimes Spring Training games, and of course, the World Series. The third clue is that these two squared off in game three of the World Series that year, so opposing starters shaking hands would be a good photo for the newspapers.

Herb Pennock is not one of the elite Hall of Fame pitchers, but he is one of the best postseason pitchers ever, going 5-0, 1.95 in 55.1 innings, with just eight walks. His regular season record stands at 241-162, 3.60 in 3,571.2 innings. While he was helped by playing for strong teams his entire career, he was still a very good pitcher, who put in work, and came through in huge spots. Meadows played for some bad teams in his career outside of Pittsburgh. He had a 3.37 ERA in 3,160.2 innings pitched. That’s 0.23 better than Pennock during a similar time frame, but Meadows finished with a 188-180 record. One is in the Hall of Fame, the other is slightly known for winning 19 games for both the 1925 and 1927 Pirates World Series teams, while winning 20 games in between those two seasons. Honestly, I bet more people know of him because he wore glasses back when almost zero baseball players wore them. 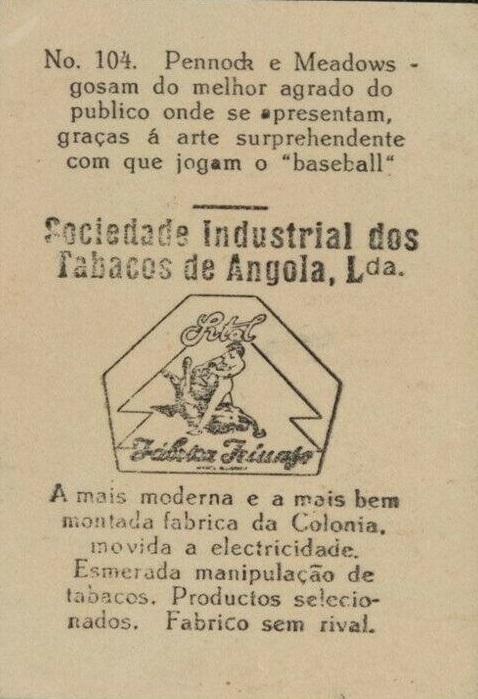 The back here is in Portuguese, which I can’t read all of because some words are different from Spanish and my Spanish is somewhere between “I took it for three years in high school” and “fluent”. The top part basically says that the fans from each city enjoy the work that Pennock and Meadows do in baseball. The bottom part brags about their products and the fact that they use electricity in a modern facility. I’m simplifying it, but it’s basically just a brag.

There is only one of these cards available on Ebay and my guess is that it doesn’t come up often. I found one other that was part of a group in an auction house listing. This one you see above is in a PSA 7 holder and the seller is asking $635, with a best offer option. Being on a card with a Hall of Famer pushes up the value, but the fact that it’s so rare helps as well. I don’t know if that’s a good price, but it doesn’t seem outrageous, though I’d use that best offer option just in case.