I’m shocked that this can still happen after 700ish Card of the Day articles already posted. This is the first time that Danny Jackson has appeared in this series. It is also the first time for the 1993 Donruss set. It feels like this should rarely happen, where I can get a new player and a new set (without using a brand new set) in the same article.

Danny Jackson didn’t have a long stint with the Pittsburgh Pirates, but there is some significance behind his time with the team. They acquired him on this date in 1992 to add a starting pitcher to their rotation, trying to win their third straight National League East title. You already know that they won that year, and Jackson went 4-4, 3.36 in 88.1 innings over 15 starts. His lone start in the NLCS did not go well, but we don’t need to rehash that game/series.

It’s interesting that Jackson ended up in the 1993 Donruss set with the Pirates. They lost him to the Florida Marlins in the 1992 expansion draft on November 17, 1992. When people were getting these card, he was no longer a member of the Pirates. In fact, he wasn’t a member of the Marlins either. They traded him later that same day to the Philadelphia Phillies. So this card was actually two teams behind by the time people were opening 1993 Donruss packs. He’s pictured on the Pirates though, so that makes it Card of the Day material. Here’s a look at card #202 from the 1993 Donruss set. 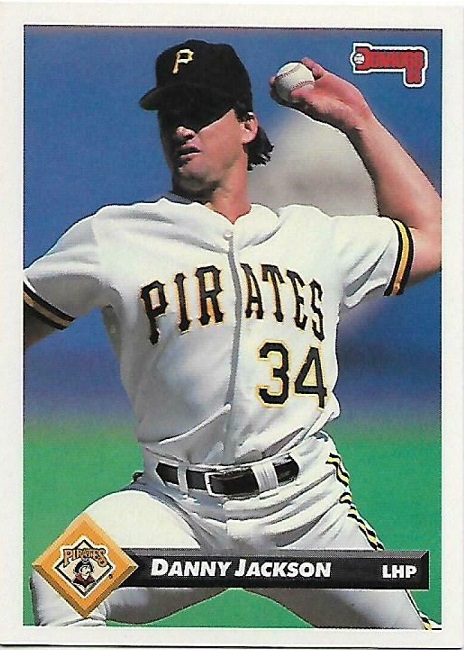 This is an interesting choice of photos, made more interesting by the back of this card. That shadow caused by his hat darkens out half of his fact, making him a bit of a mystery man. Those home whites from that season always look good.

This set design is one that is simple, yet it looks good. Donruss used team colors for the diamond that holds the logo, as well as the strip/block for the name and position, utilizing the black and gold colors of the Pirates. What’s interesting about the diamond shape for the logo is that the Pirates logo back that also had a diamond shape, so it really looks better with the Pirates logo than any other team in the set. It happens quite often, but this is one set where the Pirates cards rate higher than other cards in the set. Just yesterday I was talking about two sets where that wasn’t true because they matched up pink to the Pirates players and it really detracts from the look. 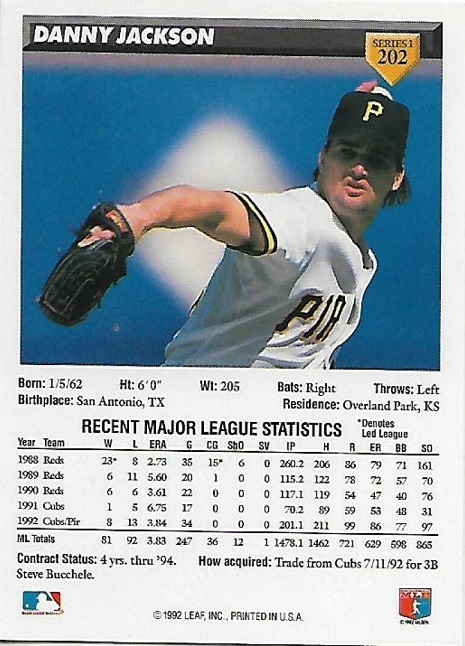 I mentioned that there was something on the back that made the front photo choice an odd one. It’s the picture, which is a much more clear shot of Jackson. There’s still some shadowing, but it’s nowhere near as bad as the front. You would think that the better photo would be on front. At least I would think that way.

The stats on back here left off all of his minor league stats (typical of Donruss), and five years of big league stats. The cutoff point leads off with his incredible 1988 season. He led the league in wins and complete games, made his first All-Star appearance, finish ninth in the MVP race, and second in the Cy Young voting. Unfortunately for Jackson, that was the year that Orel Hershiser was pitching like he was Cy Young himself, so he ended up with every first place vote for the award.

If you’re interested in this card, there are no special auctions on Ebay right now among the 15 listings. So just check the scan, check the seller feedback, and make sure the shipping charges aren’t crazy. Multiple sellers have this card for under $2 delivered. None have sold in the last three months, so you will be the first buyer in quite some time.