Today’s Pittsburgh Pirates Card of the Day contains two subjects that haven’t been featured in this series in quite some time. Today is shortstop Gene Alley’s 82nd birthday. His last appearance in this series was on his 81st birthday, when we looked at his 1968 Topps All-Star card. It has been even longer for the 1969 Topps set. That last appeared here on September 20, 2020, celebrating the birth date of pitcher Bob Moose. My choice of today’s was based on the 1969 set not being used here in so long, but I also liked the look of this card as I was scrolling through options, even if the 1969 Topps set isn’t one of my favorite designs. So let’s take a look at card #436 of the 1969 Topps set, featuring two-time All-Star, two-time Gold Glove winner, and member of the 1971 World Series champs, Gene Alley. 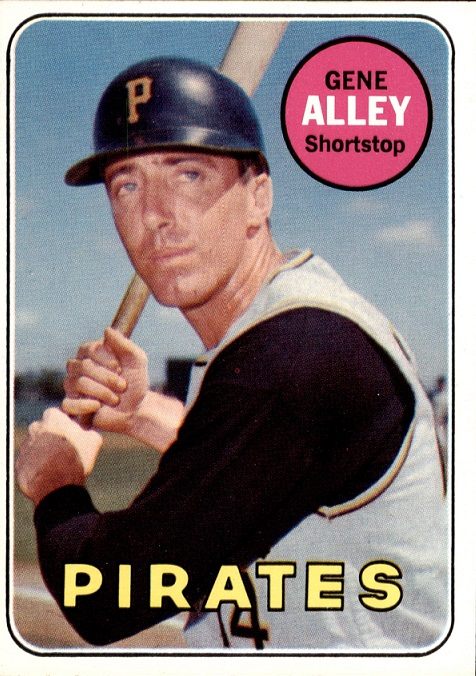 Part of the reason I probably haven’t used the 1969 set in so long is because I’m not a huge fan of the look. I’m not sure if it’s my least favorite Topps design from the 1960’s, I know that 1962, 1968 and 1960 are my top three in that order. The 1969 set is near the bottom of that list, fighting it out with the 1967 set for the bottom shelf prizes. I think it’s just the simplicity of the design (which sometimes works), but also a whole, the set has a lot of bad photo choices. It feels like it has more than other sets, but that could just be my opinion based more on not liking the front design.

I do like the look of the Pirates cards in this set, except for the use of pink in the top right circle for everyone on the team. Topps saddled the Pirates players with pink in 1965 as well, and I like the overall look of that set a lot more than the look of the Pirates cards. The appeal is all in the old uniforms, which helps the look for the Pirates players. The yellow letter for the team name at the bottom also helps. It’s far from the worst looking set in my opinion, you should know by now that I don’t like the whole four-year run of 1977-80 Topps cards, but it’s definitely in the bottom third for me. 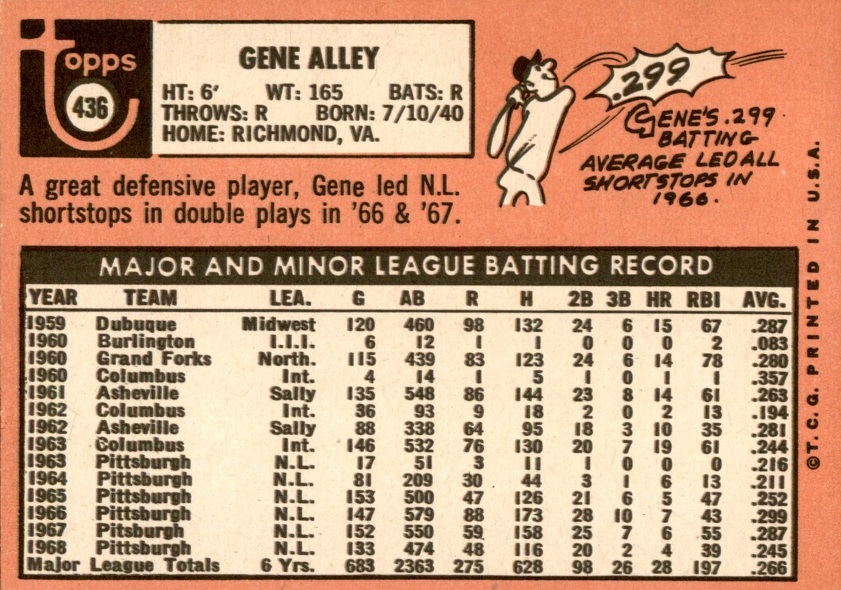 The back includes all of his pro stats and I like that they tell you the league he was in, even if they left out the classification/level. The back talks about his 1966-67 seasons and those were the peak of his performance. He saw his average drop to .245 in 1968, though that particular year was a low point for offense in baseball and they made mound rules to take away the advantages of pitchers, which helped the offense return in 1969, but he batted below .250 in each of his final six seasons.

I always like including this fun fact when talking about Alley. He finished with 999 career hits (all with the Pirates), which gets bumped to 1,000 if you include the postseason. However, he had 27 at-bats in the postseason to get that one hit. He ranks 35th in team history in hits.

If you would like to purchase this card, then you know where to go by now. There are currently almost 170 auctions for this card, so you have plenty of options in almost any condition. The most expensive is $97 for a PSA 8, but that price is crazy. There’s another PSA 8 for $53 delivered. The next card of interest is an autographed copy for $17, with a best offer. That too is another where if you keep searching you will find a better deal. Surprisingly, you can find 14 other autographed copies, ranging from $9 to $16 delivered. If you just want the regular card in decent shape then you can find two solid choices for $2 delivered, and about another 25-30 that are all between $2.25 and $3 delivered. That’s a great price in my mind for a 53-year-old card of a quality player in Pirates history.