The Pittsburgh Pirates had their share of future Hall of Famers in 1934 and five of them saw action in an exhibition game against a semi-pro team called Summerfield Chevrolet on July 9, 1934.  In front of 3,000 fans in Flint, Michigan, Paul Waner, Lloyd Waner, Arky Vaughan, Pie Traynor and a 60-year-old man named Honus Wagner all took part in the game. You read that last name (and age) correctly. The immortal Honus Wagner actually played shortstop and batted in a 1934 exhibition game as a member of the Pirates.

This trip to Flint, Michigan would be unheard of now. The Pirates played a doubleheader against the Chicago Cubs on Sunday, July 8th. They then traveled to the exhibition game in Flint. They were off that day because it was the All-Star break. From Flint after this game, Traynor, Vaughan and Paul Waner each traveled to the Polo Grounds for the second annual All-Star game. The rest of their teammates also made the trip because on Wednesday, July 11th, the Pirates started a series against the New York Giants. However, the rest of the team went to Pittsburgh first, then on to New York, while the three All-Stars went straight from Michigan to New York.

So those three players played five games against four teams in three cities over a four-day stretch, though they had doubleheaders on the 12th (versus the Giants) and the 15th (versus the Boston Braves), so it was really 11 games versus five teams over eight days in four cities, and even more if you go back to the start of the Chicago series. You have to also remember that travel wasn’t quite as nice as it is now, so that was quite a trip.

Teams often played exhibition games during the season back in the earlier days of baseball. That is against the rules of the league now, but back in 1934 it wouldn’t have been odd to see a big league team in a minor league team playing either a minor league team or a semi-pro team. It was the only time some people got a chance to see big league players. So the top players would take part in the games, regardless of how rough the travel/schedule was for them. Since they were exhibition games, then sometimes some fun things happened for the enjoyment on the local fans. One of those things was a ballpark filled with people getting to see one of the greatest players ever suit up and take the field.

The Pirates used 16 players in this game, including 12 position players. That doesn’t sound odd for an exhibition game, but the team used just 16 position players all season in 1934 and two of them weren’t even with the team when this game took place. As for the other two, backup catcher Tom Padden didn’t play, and neither did Hall of Famer Freddie Lindstom. He was out with an injured finger that hampered him for most of the season and cost him two weeks in June/July. Technically the Pirates used 14 position players in this game, but that includes Honus Wagner and pitching coach Otis Crandall, who finished the game at first base. He last played in 1918, though he was “only” 46 years old at the time of this game. He won 102 games in the majors and finished with a 2.92 career ERA.

There’s no full play-by-play of this game available, which isn’t a surprise considering it was an exhibition game. We do have some details from the game, and there’s a complete boxscore… 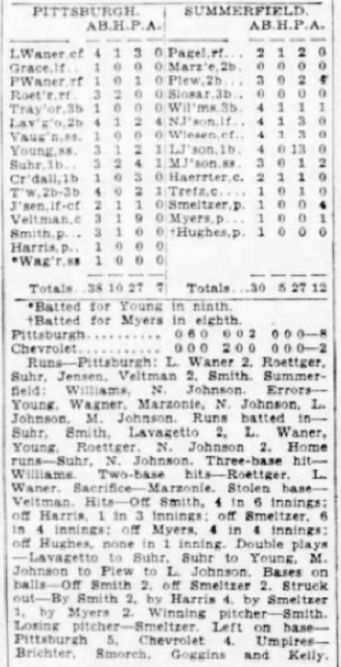 They liked to use abbreviated names in the boxscore apparently. I’m not going to worry about the opposing side, but there’s two names on the Pirates side that might be a little hard to figure out. The “Lavgo” is Cookie Lavagetto and the “Tw” is Tommy Thevenow. Just in case you didn’t know, the “Roetr” is Wally Roettger. I was thinking that if you didn’t know that one, you probably don’t know who he is anyway, but then I realized that I’ve mentioned him here twice a year every year, so you just needed your memory jogged a bit.

As you can see from the boxscore, the Pirates basically won this game in the second inning. Their scoring started with a home run from Gus Suhr. The other five runs in the inning scored on a combo of three errors, two walks and singles by Woody Jensen, pitcher Hal Smith, Lavagetto and Pep Young. The Pirates had ten hits in the game and five came in the one inning. There is no mention of how the other two runs scored, but you can make some guesses from the boxscore with Lloyd Waner and Wally Roettger both collecting RBIs, but not getting mentioned in the second inning recap.

Hal Smith gave up both opposing runs in his six innings of work. It’s interesting to note that he last pitched in a regular season game back on June 2nd, then didn’t pitch again until July 26th, so he was buried in the Pirates bullpen at the time. The other pitcher is Bill Harris, who threw three shutout innings. He was seldom used that season, then just two days after this game, the Pirates optioned him to the minors. He returned in September to pitch his final two games for the Pirates. So while the regular positions players all got work, the Pirates were throwing out their mop-up guys to take care of the pitching work. As you would expect, they handled the semi-pro team easily, and you wonder just how much effort they were giving out there.

You’ll note from the boxscore that Traynor, Paul Waner and Vaughan all just batted once. One of the newspapers made it sound like they made their appearance for the fans and then headed off to New York before the game was over. That was said specifically, but it sounded that way. So really, the only future Hall of Famer the fans got to see for more than a brief appearance in this game was Lloyd Waner. Another Hall of Famer was likely there, though he was never mentioned so I’m not sure how many of the pitchers traveled with the club. Waite Hoyt was on the pitching staff at that time. The Pirates had a seventh Hall of Famer in 1934, Burleigh Grimes, but he didn’t join the club until August.

As for the Honus Wagner appearance. The fans in attendance we probably just happy to see him on the coaching lines. He was a legend at the time, claimed by some to be the best player ever during and after his career. I imagine that seeing Wagner take batting practice would have been a great memory, but they got something better. In the ninth inning, Wagner pinch-hit for Pep Young, and then he stayed in the game at shortstop for the final three outs.

It’s funny that I checked multiple papers from both Michigan and Pittsburgh and none of them mentioned what he did in his at-bat. Clearly he went 0-for-1, so it was an out or an error, but I can’t find the specifics. He also committed an error during his inning at shortstop, in what looks like his only play, but no one mentions that either in any recaps. I guess it really didn’t matter what he did, just that he made the effort and just seeing Wagner play was enough.

Finally, one of the notes from this game said that Frank Bowerman showed up to greet his old friends. He was once a catcher for Otis Crandall, and he played for the 1898-99 Pirates.