All I can say about this article subject today is wow. Somehow it took 28 months of nearly daily Card of the Day articles to include a card from the 1990 Upper Deck set. It almost didn’t even happen today either, as I was thinking about using another set that hasn’t been here since last March, but I decided to just check other sets to make sure they have all been represented here at least once. A search of “1990” on the site showed numerous past articles featuring cards from 1990, but no Upper Deck cards from that year.

Bob Kipper played for the 1985-91 Pittsburgh Pirates, so he was around during a time period when new card companies were showing up, giving me plenty of options for his card choice. The same is true for any other player during that time period, so you can see how a set might slip through the cracks for so long. With Kipper playing seven seasons in Pittsburgh, plus the fact that this is his first appearance in this series as well, meant that it would have been unlikely that I chose the 1990 Upper Deck set if I didn’t check past articles and just picked a card that caught my eye. Here we are though, finally, looking at card #560 from the second Upper Deck set, featuring left-handed pitcher Bob Kipper. 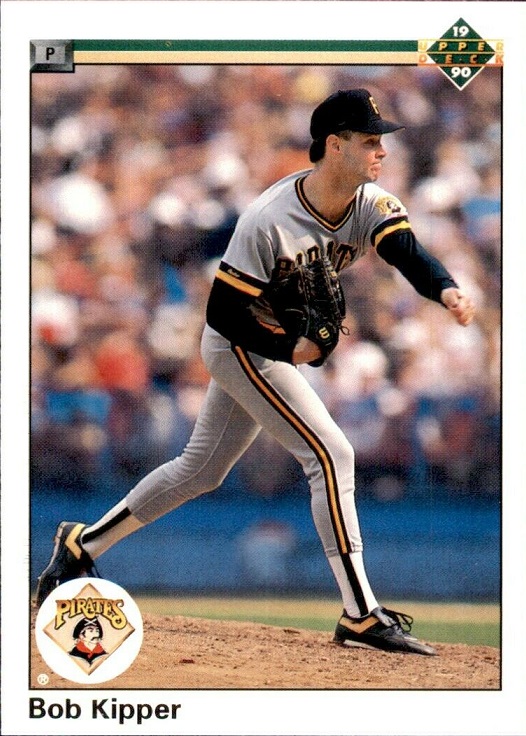 Upper Deck didn’t make many massive changes from their first set put out in 1989. You have the white border/black frame around the large photo. The name in black at the bottom. The Pirates logo (smart not to change that) and an Upper Deck logo. The 1989 set had what looked like the first base foul line down the right side of the photo. This set has a more subtle border disruption, with two stripes across the top and a small box for the player’s position. I’m not going to complain about all of the similarities because A) it looks good, and 2) the 1989 Upper Deck set changed the baseball card collecting game, so they got a built-in pass in 1990. 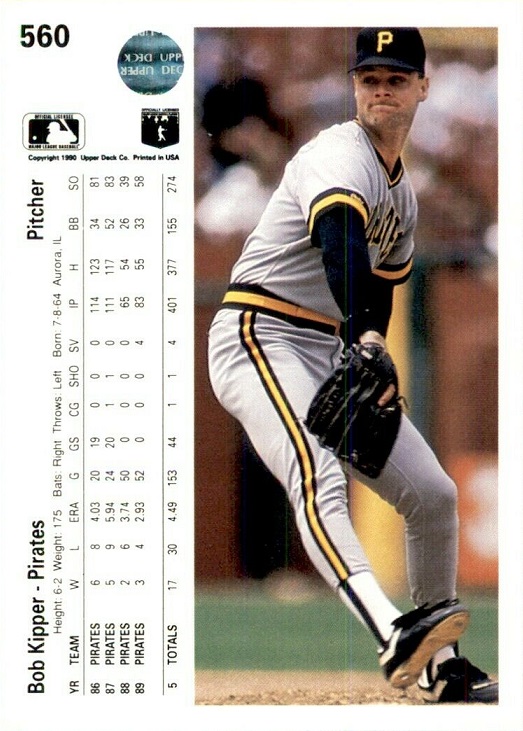 Alright, I gave them a pass on the front, but the back looking almost the same too? The 1990 backs look like a rough draft of the 1989 backs. The 1989 set at least had the foul line design from the front around the stats, but they just went plain here. I am definitely not complaining about getting a second great photo from a different angle. That’s a great look. However, that’s what they did in 1989, along with the sideways stats, which were limited for anyone who had more than a few years in at the big league level. They were keeping it to a maximum of five lines of stats here like everyone else, but ran into the issue of him playing for two teams during his rookie season in 1985. They could have just combined the stats and put both team names in one line.

If you’re looking to purchase one of these cards, you’ll find this part interesting. You’ll have to be careful because multiple sellers have his 1991 card listed as 1990. How could that happen, you ask? Not only are the designs similar, but they used a similar photo. Yes, the 1991 Upper Deck set also has a similar look. There are plenty of cheap $1-$2 options for this card, and there are five auctions of note, all of them autographed cards. One person has an autographed copy for $16 delivered. Before you jog over to Ebay to get that one, realize that the other four autographed copies are all going for just about $3 delivered each. Also, you’ll love this…the expensive one is actually a 1991 card.